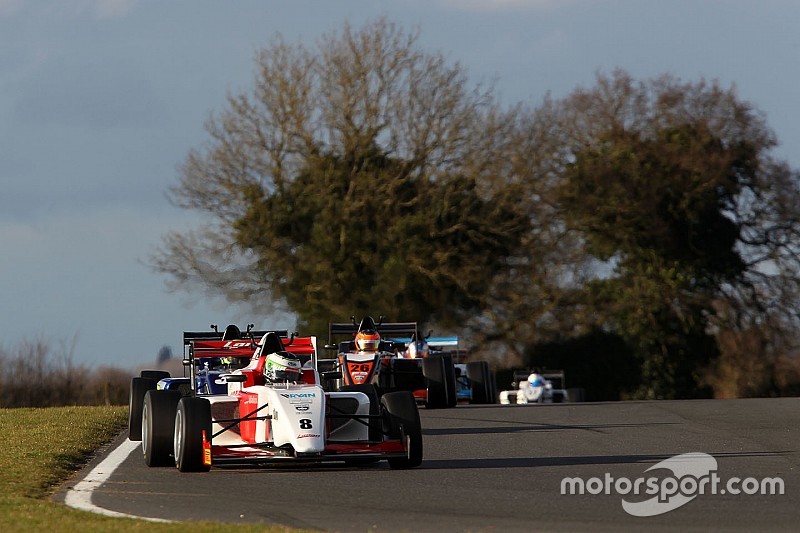 Championship leader Toby Sowery made a rocketing start from sixth on the grid to clinch a dominant victory in the second race at Brands Hatch.

Sowery got off the line well and overtook a string of cars ahead, passing polesitter Enzo Bortoleto to move into the lead by the end of lap 1.

Once in front, the Lanan driver controlled the proceedings, winning the 14-lap race by a mammoth margin of 9.413 seconds to further extend his championship lead.

Behind him, Indian Tarun Reddy secured his first podium with second place, having passed Ricky Collard and Bortoleto in quick succession in the opening three laps of the race.

Bortoleto, however, managed to hold on to the final spot on the podium, fending off the aforementioned Collard and Douglas’ Thomas Randle. The three drivers were separated by half a second at the chequered flag.

South African Sisa Ngebulana finished in a fine sixth place, ahead of Fortec’s Faisal Al Zubair, who dropping from fifth.

Thomas Maxwell was eighth in the lead Sean Walkinshaw entry, teammate Denyssen behind him in ninth.

The South African overtook Chris Dittmann’s Quinlan Lall and debutant Krishnaraaj Mahadik during the race, with the former ending 10th and latter 11th.

Yesterday’s race winner Matheus Leist spun at Druids corner on the opening lap, bringing his race to a premature end.

Carlin's Colton Herta, who pitted at the end of the first lap, emerged to finish six laps and clocked the fastest lap of the race, giving him pole position for the final race of the weekend.