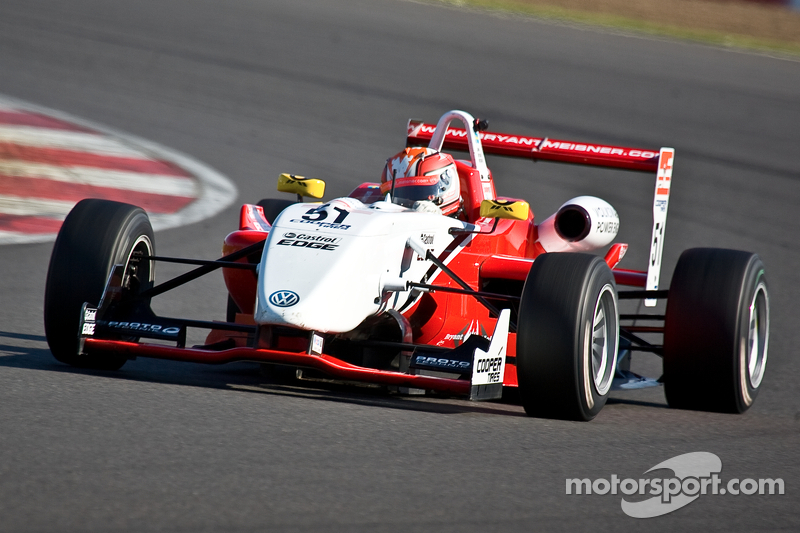 Jordan King took the British F3 International Class victory; however Invitational racer John Bryant-Meisner was first across the line. The National Class was once again a walk over for Edward Jones.

At Silverstone this afternoon John Bryant-Meisner (Performance Racing Europe) once more proved the class of the field, despite a weight penalty designed to slow him down and allow the International Class winners a chance of beating the Invitation Class man. As it was Jordan King (Carlin) took the class win, coming home just behind the Swede, while William Buller (Fortec Motorsport) survived an early incident to finish 3rd overall, just in front of Jann Mardenborough (Carlin). The National Class was once again a walk over for Edward Jones (Team West-Tec).

At the start, Bryant-Meisner got away in the lead, while behind him King was slow getting away and lost ground to both Buller and Felix Serralles (Fortec Motorsport). Felipe Guimaraes in the third Fortec car was on the move but was tripped up when Mardenborough ran far wider than is normal and in the aftermath Nicholas Latifi (Carlin) dropped places he couldn’t afford to lose.

Bryant-Meisner started to pull away from Buller and Serralles as the pair of them battled for position. Serralles saw what he thought was his chance and pulled out to go round the Irishman, Buller pushed back, they banged wheels on the run down to Brooklands, and Serralles found himself bouncing over the kerbs, completely unable to regain control of his stricken Dallara. The result was that the pair of them arrived at Brooklands and Serralles had no choice but to use Buller as a brake. Buller lost a place (and his air box) while Serralles dragged the wreckage round to the pits, got out and stormed off, furious.

That let King up into 2nd, while Buller tried to sort himself out and get his race back on track. The result of all of this was that Bryant-Meisner opened up the gap ahead, while the drivers behind started to jockey for position. Latifi was busy looking for a way past Guimaraes, and the Double R Racing duo of Sean Gelael and Antonio Giovinazzi were locked in a squabble for 7th.

While Bryant-Meisner continued to motor steadily on, the news that the Buller/Serralles incident was under investigation flashed up. It suggested we might have something of a wait for the final results to be declared, but that was moot right now. There was a race to be run, after all. In the National Class, Jones was also building up a lead over Sun Zheng (CF Racing) and Chris Vlok (Team West-Tec). National B Class driver Alice Powell (Mark Bailey Racing) was up to 16th and seemed to want to play with the West-Tec boys. Whether they wanted to play with her was a whole other question.

The leader continued steadily on his way, ballast or now. King was still 2nd, from Buller, and Guimaraes had clawed his way into 4th. Mardenborough was clear of Latifi, who had passed Gelael and Giovinazzi earlier. That was enough for Giovinazzi, as he too charged past the Indonesian youngster to claim 7th. That just left Tatiana Calderon (Double R Racing), the Colombian girl now 9th ahead of the National Class battle. Jones was still comfortably in the lead there, from Zheng, Vlok, Roberto la Rocca (Team West-Tec), Cameron Twynham (Team West-Tec), Liam Venter (Team West-Tec), Powell, Sean Walkinshaw (Team West-Tec) and Hu An Zhu (Team West-Tec).

And then we started with the track limits warnings, in this instance for Buller and Powell. It seems to be becoming increasingly common, which makes you wonder. If there’s an area of track that the officials would prefer drivers to stay off, why not put something there to stop them? Gravel? Kerbs? Grass? A moat full of crocodiles even? It just seems to be becoming ridiculous now and perhaps needs to be looked at.

While King started to take chunks out of Bryant-Meisner’s lead, la Rocca had his hands full trying to stop Twynham from taking 4th in class away from him. As it turned out he simply couldn’t hold Twynham off, and the youngster was soon through and on the tail of Vlok. He followed that up by taking 4th from Vlok before passing la Rocca as well. He had Zheng in his sights next, the only man safe from him being Jones, who had a lead of four seconds and wasn’t about to relinquish victory to anyone any time soon.

There were more warnings issued, this time for Guimaraes, and Venter, which rapidly translated into a drive through for the Brazilian. He proceeded to ignore it until the last possible moment, by which time he was joined on the list of those who had not heeded the warning sufficiently by Powell and Venter.

At the front it was all still to play for. King’s efforts had netted him a fastest lap of the race, though he didn’t keep it for long. Buller went even faster, as they both tried to chase down Bryant-Meisner. Behind them, Guimaraes finally came in to serve his penalty, handing 4th to Mardenborough, and dropping back to 9th by the time he emerged from the pits to rejoin the race.

In the closing stages of the race, Walkinshaw was next to get a track limits warning, followed by Calderon, while Venter finally served his penalty for his track limit infringements, ending up last, just behind Powell who has also come in for the same reason. At the front, King was now closing on Bryant-Meisner. However, catching him was one thing, passing would be quite another. He did set another fastest lap in pursuit of the Performance car, but eventually decided it was better to collect the full points for the International Class win and finish 2nd on the road rather than risk it all in a needless lunge for the lead.

The fastest lap went back to Buller, as King caught up with Bryant-Meisner. That slowed the youngster right up, and Buller was soon with him, but no one seemed inclined to try anything this close to the chequered flag. In the pack Guimaraes took 8th from Calderon, and quickly caught up with Gelael, the Indonesian another track limits offender, as was Zheng. In fact the Chinese eventually took to the grass, but he hung onto his place, staying ahead of Twynham for 2nd in the National Class.

None of the pressure seemed to have the slightest effect on Bryant-Meisner, the Swede apparently unconcerned by anything happening in his rear view mirrors. Behind them though, Guimaraes was all over Gelael for 7th. They came close to banging wheels before Guimaraes was through despite being pushed quite hard in his efforts to claim 7th.

The last couple of laps saw Walkinshaw and Zhu fighting for 6th in class, where it was quite clear that Zhu really wanted it, but Walkinshaw didn’t have the slightest intention of letting it go. He was helped when Zhu was awarded a 30 second penalty for not respecting the track limits, it being too late in the day for him to serve a drive through. They both got promoted a place though, when Vlok pulled off and parked, a puncture having put paid to his race.

And so, as the flag fell, Bryant-Meisner won his second race of the weekend, from King, Buller (who now leads the championship), Mardenborough, Latifi, Guimaraes, Giovinazzi (another to lose out to the Brazilian), Gelael, Calderon, and Jones. 11th overall and 2nd in the National Class was Zheng, from Twynham, la Rocca, Walkinshaw, Zhu, Venter and Powell.

First F3 win for Giovinazzi in race 2 at Silverstone