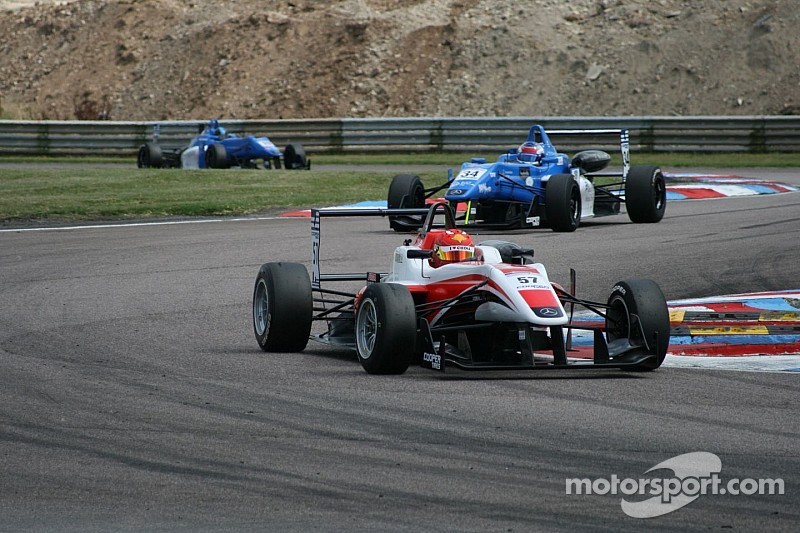 With one more race here today this is not over yet.

At Brands Hatch this morning, Hongwei Cao (Fortec Motorsport) moved further back into the lead of the 2014 Championship after beating his team-mate Matt Rao away from the lights and never being challenged again over 23 laps of the Grand Prix circuit. 3rd place went to the last of the Fortec drivers, Santino Ferrucci, the Daventry-based team thus locking out the podium. Sadly, as is often the case at Brands Hatch what we got was a desperately dull race, with the cars spreading further and further out as the race wore on to its inevitable conclusion.

Basically what matters on this circuit – where it is almost impossible to overtake under normal weather conditions – was how well each driver started.

Cao made an excellent start to wrest the lead from Rao, having passed Dan Wells (Double R Racing) en route. Wells, starting 2nd, not only lost out to Cao and Rao, but also to Ferrucci, which meant all three Fortec cars were now together at the front. The sinking feeling that followed was brought on by the realisation that that would probably be it for excitement for the next half hour.

For a very brief while it did look as if Ferrucci was considering an attack on Rao, but he seemed to think better of it, not wanting to get involved in a championship fight that is nothing to do with him, and he settled down for a quiet drive to third, leaving Rao to mind his own business in 2nd. Probably Matt was quite glad of that given his dramas of Saturday when he lost an almost certain 3rd place when his radio came loose in the cockpit and got stuck under his accelerator, pitching him into a spin.

Cao set a series of initial fastest laps, then settled in holding the gap at around three and a half seconds, but was clearly not going to do any more than he needed to to win this race.

Behind the Fortec trio, Wells was now clear of Max Marshall (Double R Racing), while Li Zhi Cong (Carlin) took a look at relieving Camren Kaminsky (Double R Racing) of 6th but never really looked as if he was going to be able to do it. With 18 minutes left, the challenge evaporated and any interest in what was going on for the spectators sadly went with it.

In fact the only change to the order came when Marshall went off at Druids on Lap 14, taking one of the front wheels off the car. And he did it all on his own too.

And so Cao came home for yet another win, with Rao around 3.6 seconds adrift. Ferrucci, whose car seemed very smoky when they were getting ready for this race, was 3rd, nearly nine seconds behind Rao. Wells was 4th from Kaminsky and Cong, with Marshall not classified.

Cao also claimed a point for fastest lap of the race, which puts him ahead by 9 points in the championship from Rao. With one more race here today, and three after that at Donington Park in two weeks, this is not over yet.

Ferrucci demolishes the opposition at Brands