Ferrucci demolishes the opposition at Brands 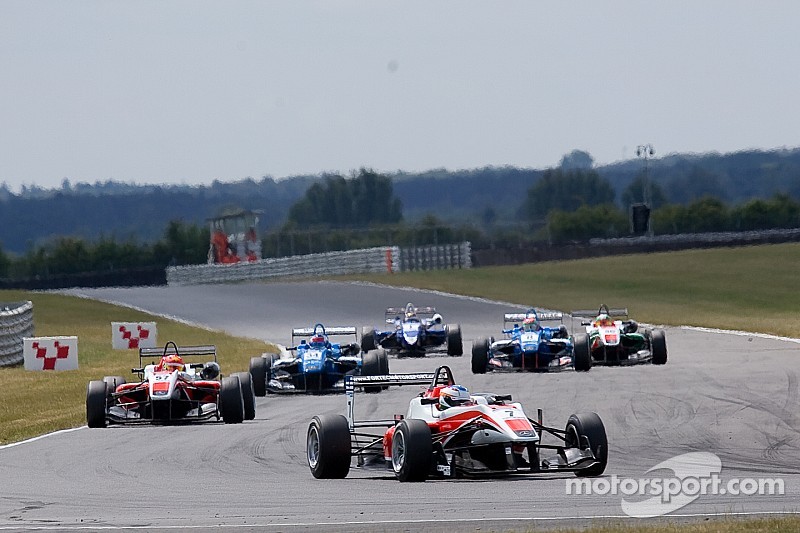 At Brands Hatch this evening Santino Ferrucci (Fortec Motorsport) drove a textbook race from start to finish to claim victory in his first ever race in the British F3 Championship. The American, who normally races in the FIA F3 European Championship was trailed home by Martin Cao (Fortec Motorsport), the Chinese driver regaining a slim lead in the series by finishing 2nd while debutant Dan Wells (Double R Racing) inherited 3rd place in the closing stages of what was a mostly processional race.

Starting on new tyres, new boy Ferrucci made the ideal start to power away into the lead, while Cao did his best to keep pace with the youngster. Further back Max Marshall (Double R Racing) got the drop on Camren Kaminsky (Double R Racing) for 6th, while Wells settled into 5th, and Matt Rao (Fortec Motorsport) began looking for a way past Li Zhi Cong (Carlin) for 3rd.

As Ferrucci powered away into the distance, Cao following, Li found himself struggling to hold onto 3rd, not helped by the fact that it wasn’t just Rao he needed to keep at bay but also Wells and Marshall.

Ferrucci, meanwhile, had his head down and was concentrating on opening up a gap for himself, setting a series of fastest laps as he did so, until the margin between himself and Cao was over three seconds at the start of lap 4.

On the same lap, Rao figured out the answer to Li, exiting Paddock Hill Bend right on the Chinese driver’s rear wing, which meant that he was ideally positioned to slip past the Carlin car to claim 3rd. If he finished there, then he would still lead the championship, albeit by a single point. Of course if he could pass Cao, that would be even better.

With Fortec now running 1st, 2nd and 3rd, with very large gaps between them, that left the battle to pass Li with Wells now on his case. It wasn’t long before Wells was through and vanishing down the road, and to add insult to injury Marshall went through as well. That only left Kaminsky between Li and the tail-end Charlie slot. That took a little longer as Kaminsky repeatedly tried and failed to find a way past. He finally nailed it after several attempts by slipping through on the inside of Li at Druids on Lap 14.

At the front Ferrucci seemed to have decided he’d done enough and he settled down, holding the gap at around 5 seconds, driving no faster than was necessary as he tried to preserve both the car and his tyres as much as possible. Cao never looked likely to catch him, and so it would prove.

As the race moved into its final few minutes Kaminsky started to catch Marshall for 5th, but it seemed he would run out of time before he could really get on terms with his team mate. It would depend on how many laps were actually left. As it turned out, not quite enough, though he did get very close by the final lap eventually losing out by a mere 2/10ths of a second.

As Ferrucci came home to victory, Cao just behind, it all fell apart for Rao as he spun away 3rd place. A grateful Wells claimed the place as Rao was recovering and held him off all the way to the chequered flag to snatch the final podium place, leaving Rao to come home in 4th, though it does mean he will start tomorrow morning’s race from pole. Marshall was 5th from Kaminsky and Li.

The fastest lap of the race – it almost goes without saying – went to Ferrucci.