First spoils to Buller at Silverstone 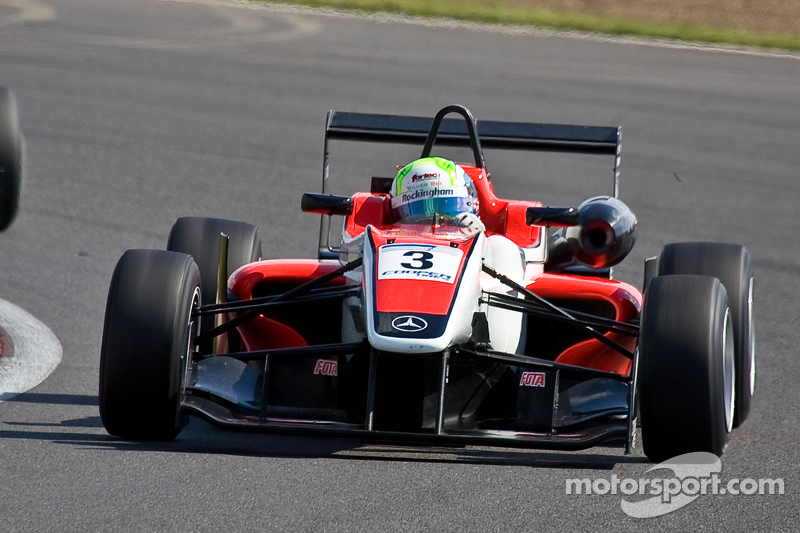 Fortec Motorsports’ William Buller took the opening win of the 2013 Cooper Tires British Formula 3 International Series, with a solid eight second victory in race one at Silverstone on a sunny Saturday afternoon.

It was Performance Racing Europe’s John Bryant-Meisner finished first on the road, but his invitation class status means the Swede doesn’t score points, despite taking the flag ahead of Buller. 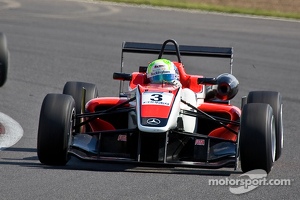 Canadian Latifi defended his position valiantly on the opening lap, but came under pressure immediately from Fortec Motorsport’s Felix Serralles. The Puerto Rican made a brave move around the outside through the high-speed Abbey corner, but the pair made contact at the loop when Latifi tried to respond, both dropping to last as they sat locked together in the middle of the track.

It was Buller that took up second place ahead of team-mate Felipe Guimaraes, but the latter was soon overpowered by both Carlin’s Jann Mardenborough and then King, who made an impressive recovery through the field following his slow getaway.

Twenty-year-old Buller then found himself under extreme pressure from the two Carlin drivers. GT-turned single-seater racer Mardenborough ran slightly wide following an attempt to overtake the former three-time British F3 race winner around the outside at Stowe corner; fellow F3 rookie King took full advantage and slipped through at Club. The battle continued as Mardenborough hung on through Village before fending off the Carlin driver’s next attack at Brooklands.

The battle between the two Carlin drivers ended prematurely following a move up the inside into the Village loop by King that resulted in contact; King retired to the pits while team-mate Mardenborough spun, retiring also with left-rear suspension damage. Although now some ten seconds behind invitation class entrant Bryant-Meisner, Buller was a comfortable first in the International class ahead of his Brazilian team-mate, Guimaraes. Elsewhere, a drive-through penalty for Double R’s Antonio Giovinazzi for not respecting track limits dropped the Italian to fifth position, handing third to team-mate Sean Gelael and fourth to the third Double R Dallara-Mercedes of Tatiana Calderon who thrived amidst the surrounding pressure.

The race order remained that way until the chequered flag, Buller triumphing in the first race of the season from team-mate Guimaraes making it two Fortec drivers on the podium and a strong podium finish for Gelael, the youngest driver on the grid.

National Class pole-sitter Ed Jones survived a first-lap scare when a sideways moment sent him onto the grass exiting Becketts, but he recovered through to field to bring his West-Tec machine home first ahead of long-time race leader, CF Racing’s Sun Zheng, Jones dispatching fellow team-mate Cameron Twynham before snatching success from the Chinese driver in the dying moments of the race.

Mark Bailey Racing’s Alice Powell was another driver not to see the chequered flag, pulling off the race track with mechanical problems having battled with the National Class cars for much of the race.

The top eight finishers from race one will be reversed to decide the grid for race two tomorrow, . Sunday seeing two further 30-minute races, race two beginning at 12 pm while the third gets underway at 4:55 pm.

Quotes: John Bryant-Meisner, #51 Performance Racing Europe Dallara-Volkswagen (INV) (OTR Winner) ‘It’s a very good feeling. I made a great start, and then I was clear of the battles going on behind me, which meant I could get away. The car was exactly where I wanted it. Even without the boost the car was still quick, and actually felt more consistent.’

Ed Jones, #81 Team West-Tec Dallara-Toyota (NAT) (Class Winner) ‘It didn’t get off to the best start, coming out of Becketts I hit the kerb and that put me off onto the grass so I dropped more or less to the back of the field. I had some good racing with people from then; Zheng was hard to do much about as his car was fast in a straight line, but I managed to finally get a good run on him and got by.’

John Bryant-Meisner takes first victory of the season at Silverstone

First F3 win for Giovinazzi in race 2 at Silverstone