At Brands Hatch this morning Harry Tincknell (Fortec Motorsport) took full advantage of his pole position (drawn by his team-mate Lucas Foresti as winner of Race 1) to claim his first F3 victory, leading home Menasheh Idafar (T-Sport) and Carlos Huertas (Carlin). In the Rookie Class, Kotaro Sakurai (Hitech Racing) and Bart Hylkema (T-Sport) had a coming together on the final lap, and it was Sakurai who limped home faster to claim the win. 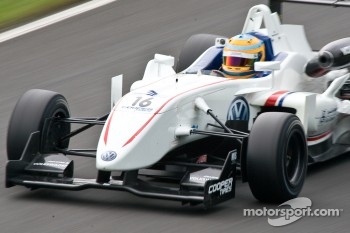 There was chaos at the start when not everyone got away cleanly and Fahmi Ilyas (Fortec Motorsport) was collected by an unsighted Max Snegirev (Hitech Racing), after someone – possibly the Russian – clouted Hywel Lloyd (Sino Vision Racing) on the way past. Lloyd limped round to the pits with damaged suspension, while Ilyas and Snegirev were out on the spot. That necessitated a Safety Car period whilst the marshals worked frantically to clear the area of Dallara bits. Whilst the field made their way round to settle in behind the Safety Car, William Buller (Fortec Motorsport) messed up the exit from Graham Hill Bend and dropped himself to last but one, ahead of Kevin Magnussen (Carlin), who had also had an “interesting” first lap and was now a long way from where he’d started. The order behind the Safety Car therefore, was Tincknell, from Idafar, Huertas, Scott Pye (Double R Racing), Felipe Nasr (Carlin), Jazeman Jaafar (Carlin), Rupert Svendsen-Cook (Carlin), Foresti, Pietro Fantin (Hitech Racing) and Adderly Fong (Sino Vision Racing). 11th was Pipo Derani (Double R Racing), ahead of Jack Harvey (Carlin), Yann Cunha (T-Sport), Sakurai, Hylkema, Buller and Magnussen. And that was how they stayed for the entire first half of the race.

With just over 10 minutes left, the lights on the Safety Car finally went out and the race got underway for what would be more of a sprint than anything. Tincknell backed them up neatly and controlled the start well, while behind him Nasr took a long hard look at getting past Pye. As the Brazilian came up alongside him, the Australian put up plenty of resistance, using his Formula Ford experience to hold off the series leader. In the usual manner, the result of the failed overtaking manoeuvre was that the man who attempted in now came under pressure from the driver behind, which meant that Nasr was now under heavy pressure from Svendsen-Cook. Meanwhile Idafar was attacked on the run to Hawthorns by Huertas, with much the same result for the pursuer.

Further back, Buller and Magnussen had both passed the Rookie Class boys before Buller set about Cunha, towing the Dane with him as he passed the Brazilian. That meant their next victim was likely to be Harvey. And so it proved. Buller went out to pass the youngster, only to find Magnussen seizing the opportunity to go round both of them at Paddock. It was quite a move from the youngster and the result was that Buller failed to execute the move himself.

In the melee, though, Nasr had now settled in and was trying for the extra point for fastest lap, presumably having decided that finishing 5th was just as good as 4th really. He’s understood that consistency wins championships and even if it’s clear that he really would rather win, he’s prepared to play a long game to get the title. As it turned out, Buller finally got the fastest lap, though not before he dropped back behind Cunha. At least he got something from what was an otherwise frustrating race.

While Fong was warned about not respecting track limits, behind him Derani lost his place to Magnussen after another of what are now becoming trademark moves for the Dane, this time a stunning pass round the outside at Hawthorns to claim 11th. Harvey was able to follow through as well, having been right on Magnussen’s wing from the point where Magnussen had passed him. It was tough on Derani but there was at least a faint possibility that Magnussen might just get into the points, if only he had enough time left to catch Fong. Sadly it was too late and at the finish he was still almost a second down. Meanwhile, after a tense battle between the Rookie Class duo of Hylkema and Sakurai, it all came to a head at Surtees, when they tangled and went off. They were both able to get going again, though they were also both severely hampered by damaged. As it turned out, Sakurai had sustained less damage than Hylkema, and it was the Japanese who limped across the line first to win the Class. Hylkema staggered round far more slowly but would take the same amount of points by virtue of having set the fastest lap of the race in class.

And so Tincknell came home to his first F3 win, from Idafar, Huertas, Pye (in his best result of the season so far), Jaafar (who got the drop on Nasr in the closing stages), Nasr, Svendsen-Cook, Foresti, Fantin and Fong (finally scoring a point). 11th was Magnussen, then came Harvey, Derani, Cunha, Buller, Sakurai and last (and parked just after the line) Hylkema.