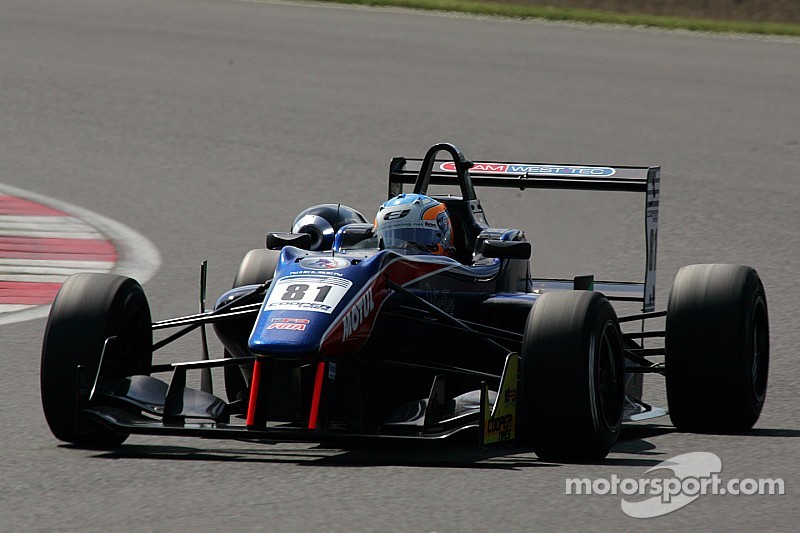 At Spa this afternoon Ed Jones (Carlin) continued to prove a dominant force, aided somewhat by having a new spec engine in his car (and thus not being eligible to score points), as he lead home Sean Gelael (Jagonya Ayam with Carlin) in Round 10 of the 2014 British Formula 3 Series. As Gelael was also ineligible for points, that meant that the winner was technically Roberto Mehri (Double R Racing), from John Bryant-Meisner (Performance Racing) and Indy Dontje (Motopark Academy).

Before the start, Martin Cao (Fortec Motorsport), experienced a bit of drama when he failed to get away at the commencement of the formation lap. He then snaked his way through the pack to reclaim his grid slot, something that would cost him later when he was penalised for his actions with a drive through. It wouldn’t exactly change the shape of the race by much, but it could have been very damaging to his points lead. As things turned out he was lucky to get away with it.

At the start, Jones didn’t hang about, the Dubai driver making a textbook start to pull ahead by the time they reached La Source, Gelael having hesitated and lost two places over the same distance, as Mehri took off like a rocket and barged his way through to second, Bryant-Meisner following in his wheel tracks. Meanwhile in the pack Dontje lunged up the inside of the Hairpin in a cloud of tyre smoke, and Sam Macleod (Carlin) came a cropper as they all scrambled to get through the first corner, ending up stranded with broken suspension. This necessitated a Safety Car period that seemed to go on for weeks.

Jones controlled the restart beautifully, while Gelael took advantage of being granted another chance by passing Bryant-Meisner to reclaim 3rd and a lap later hauling himself back to 2nd. Further back Cao began a campaign of harassment against Dontje, the Dutch driver proving slightly the stronger, a fact that in no way dampened Cao’s enthusiasm for the task at hand. Unfortunately that battle ended when Cao had to come in to serve a drive through penalty, the upshot of that being he rejoined the race dead last and quite a long way adrift of even the last man, Ling.

Jones immediately started to pull away while Gelael hung on as best he could, not helped by Mehri snapping at his heels for the greater part of the race. The relative lack of power was not helping the Spaniard but he was still determined to make as good a fight of it as he could, even if he had little hope of getting past on raw power alone. He could only hope for a mistake from the far less experienced driver ahead of him.

What followed was pretty processional, as Jones drew the gap out ever further, and Mehri’s challenge to Gelael faded along with his tyres. The only real interest now came in the shape of Cao’s efforts to catch up with the pack, and Kaminsky’s repeated attempts to pass Zlobin for 10th. With three laps to go, Kaminsky finally found a way past Zlobin as they tore through the Bus Stop, the American having to work hard to actually make it stick. A lap later and the situation was reversed, Zlobin finding his way back.

To make matters worse for Kaminsky, Cao passed Ling on the same lap, which turned out to be the penultimate lap of the now somewhat shortened race. That put him on the American’s tail, a place he didn’t stay in for long, relieving Kaminsky of 11th on the final lap.

And so Jones came home to the overall win, from Gelael, Mehri, Bryant-Meisner, Dontje, Jeffri, Chang, Rao, Li and Zlobin. 11th was Cao, from Kaminsky and Ling.

Macleod recovers to win at Snetterton