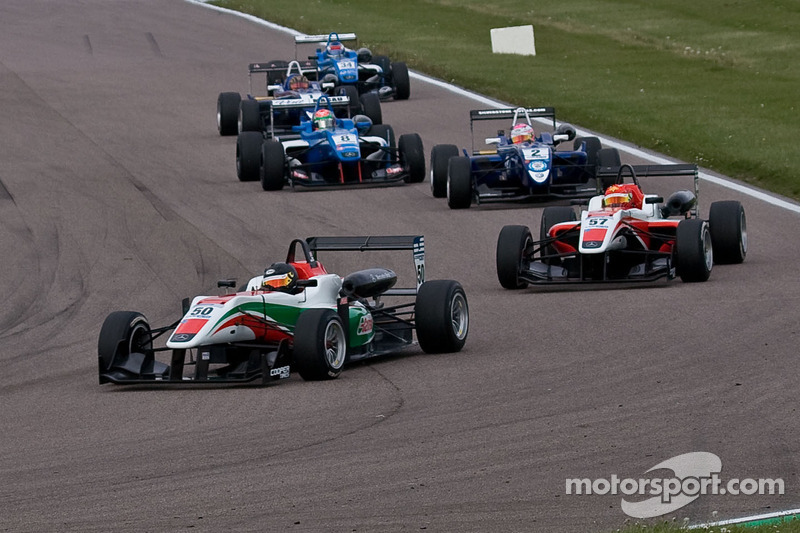 The GP3 regular had the measure of everyone from the start and was never really challenged for the remainder of the 30-minute race.

The last of three races at Silverstone this weekend provided Marvin Kirchhofer (Fortec Motorsport) with his second victory of the weekend, leading home a Fortec 1-2-3, with Martin Cao and Matt Rao. The GP3 regular, who came here to get experience of the GP track ahead of July’s Grand Prix support event had the measure of everyone from the start and was never really challenged for the remainder of the 30-minute race.

At the start the German didn’t hesitate and tore off the line and past Cao, despite the Chinese driver’s best efforts to hold him back. Cao was driving a very wide Dallara but it wasn’t wide enough to hold off his temporary team-mate.

At the other end of the grid, Egor Orudzhev (Carlin) who was demoted to the back row for dangerous driving in Race 2, was being held up by Andy Chang (Double R Racing) who was busy trying to pass his own team-mate Camren Kaminsky, while Li Zhi Cong (Carlin) fell to last as the Russian scythed past him. 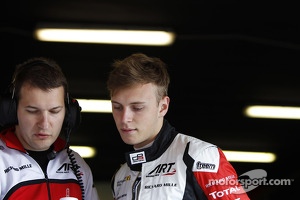 It didn’t take long for Orudzhev to deal with Chang though and a lap later he as through to 5th and on the tail of Kaminsky. That battle was short lived as the Carlin debutante forced his way up the inside at Village, unsettling Kaminsky to such an extent that the American almost lost a second place to Li. Orudzhev was now 4th.

At the front Kirchhofer was steadily building his lead and was now almost four seconds clear of Cao. The Chinese driver just couldn’t stay with the leader though he was now reasonably comfortably clear of Rao, who was being steadily caught by the charging Orudzhev.

Kirchhofer continued on his was untroubled by anything happening in the pack. He set a new fastest lap (although not without getting a warning for not respecting track limits at Copse) and simply drove away from the opposition.

Meanwhile, Chang also got a cautionary message about respecting track limits, while Cao was getting a bit wild as he tried everything he could think of to get back on terms with the leader. It wasn’t enough – to be fair it never looked as if it would be.

Behind the three red and white Fortec cars Li was closing on Chang for 6th, Kaminsky circulating just ahead of the pair, but Orudzhev was now out of their reach as he continued to close on Rao for 3rd. Rao meanwhile was nearer to Cao, who had perhaps been slowed down as a result of his attempts to get on terms with Kirchhofer.

Kirchhofer again increased his lead and set yet another fastest lap, though he was living dangerously now, the stewards seeing fit to issue him with a final warning over track limits. If he continued in this manner there was a good chance he’d get a drive through penalty. The message seemed to get through this time and he finally eased off a little.

Anyway Cao and Rao now had more to worry about than the distantly visible rear wing of Kirchhofer. Orudzhev was very much closer now and looked as if he might well spoil the Fortec party. However, fate – in the form of a suspension failure for the Russian – was about to play its hand. Coming into Chapel for the sixth time, the Carlin car’s left rear suspension let go, dumping the teenager on the grass and ending his race. It was a shame as it deprived the spectators of a drive from the rear that might at least have provided some interest.

While Rao and Kaminsky were being handed their final track limits warnings, Li was also out of the race with some sort of mechanical failure. It was sheer coincidence that both Carlin cars went out on the same lap. That left five runners, the increasingly impressive Kirchhofer, who led from Cao, Rao, Kaminsky and Chang and that was how it stayed all the way to the flag.

Kirchhofer slowed right down and actually seemed to ease off a bit, which meant no more warnings. It was probably just as well as his rear light was now flapping loose and looked as if it might fall off. While it wasn’t dangerous to him or anyone else, a penalty might have made the stewards look more closely at the offending part.

As it was he steadied and drove round to take the flag almost 14 seconds ahead of Cao, who still leads the championship chase. Rao was an excellent 3rd right on Cao’s tail. A further 13 seconds behind was Kaminsky, from Chang. The fastest lap was set by Kirchhofer.