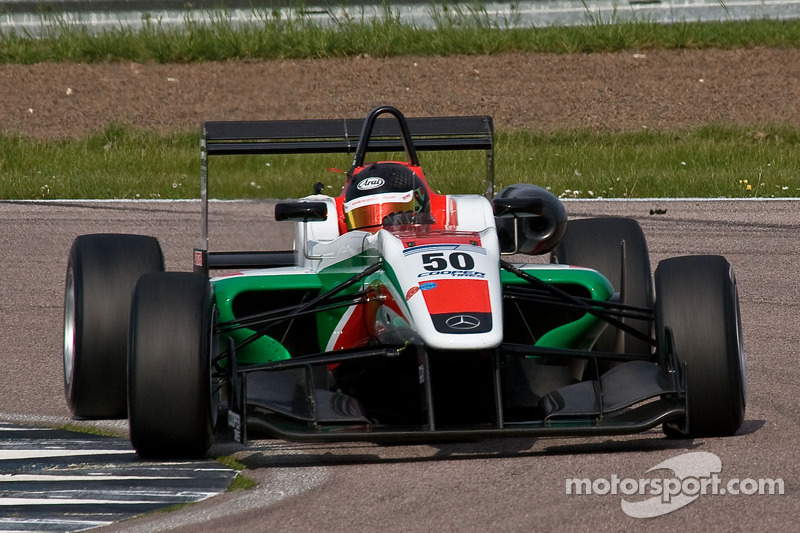 Sam Macleod took the win after having to hold off team-mate Martin “Mr. Consistency” Cao for the main part of the race.

At Snetterton this afternoon Sam Macleod (Fortec Motorsport) took the win after having to hold off team-mate Martin “Mr. Consistency” Cao for the main part of the race, the latter claiming his 7th second place from seven races to hold onto the series lead. A somewhat lonely 3rd place went to Matt Rao (Fortec Motorsport), who spent a great deal of the distance too far back from the lead pair to be able to challenge them, but too far ahead of the rest of the field to have much to do apart from concentrate on keeping it on the black stuff.

At the start Macleod got away well, towing Cao with him, while in the pack Andy Chang (Double R Racing) spun at Williams and dropped himself to last by the time he sorted out which way he was going and got going again. He would spend the first half of the race catching up and the second half attempting to find a way to get past Li Zhi Cong (Carlin).

Before the race Macleod was the hot favourite, and many expected that he would simply waltz off into the distance. Certainly during the first few laps it didn’t happen that way. Cao was right on his tail all the way, despite a lurid lockup at Murrays. The Chinese youngster was lucky it only cost him around a car’s length and he was soon able to claw that back, although it did net him a warning over track limits.

While the first two occupied each other and thus slowed themselves down, Rao started to push hard and was soon setting some very rapid lap times. In fact he set a series of fastest laps of the race, and it looked for a while as if he might start to close on the leaders. Oddly, it didn’t happen and the gap started to widen as Macleod responded to the threat from Cao, the pair of them again starting to open an ever increasing gap to Rao.

Behind the top three, Camren Kaminsky (Double R Racing) had settled into 4th while Li and Chang fell further back, Chang finally starting to catch up with Li now he’d got over his initial excursion. And then the sun came out and as the temperature started to rise inexorably so the times started to tail off. It didn’t much impact the front pair though, with Macleod finally making a break as the clock ticked round to the end of the 30 minutes of race time.

The main interest now was in what was happening at the rear as Chang worked to reel Li in. With six laps left he was on the tail of his fellow Chinese driver, and for several laps tried everything he could think of to find his way through. In response to the challenge, Li put in a new personal best lap, and Chang fell back a little, only to come back a lap later, though the officials were less than pleased about his interpretation of track limits. However, given the amount of dust he was raising, it seemed unlikely that he was gaining anything from it. In fact, it seemed far more likely that his tyres would soon be shot if he continued in the same vein for much longer.

Macleod eventually sailed round to claim the win, almost three seconds ahead of Cao, who seemed to realise there was no way he was coming past the Scot. 2nd would have to do. Rao finished a somewhat distant 3rd, from Kaminsky, Li and Chang. The fastest lap was set by Macleod finally, despite Rao’s best efforts.