At Brands Hatch this afternoon Felipe Nasr (Carlin) displayed maturity and skill to win a rain-plagued race, while behind him others were not so lucky, 2nd place going to Lucas Foresti (Fortec Motorsport) despite the Brazilian spinning twice before the end, while 3rd place was snagged by a somewhat surprised William Buller (Hitech Racing), both of them coming from a long way back, aided in part by the impetuous behaviour of others and in part by the unfathomable actions of the weather gods. The Rookie Class was won by Bart Hylkema (T-Sport), who managed to come through several bouts of carnage to claim his first win of the weekend. 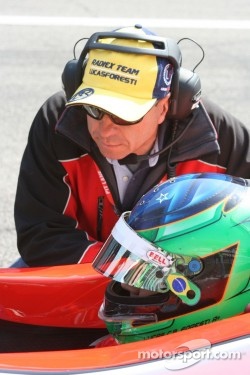 As the teams lined up in the collecting area before the pit lane opened, the clouds that had been lurking on the horizon opened overhead and then the heavens opened. Within seconds almost everyone was drenched to the skin and the decision to leave wet weather tyres on was easily taken, even though the rain had stopped – at least for the time being. At the start, Adderly Fong (Sino Vision Racing) made a terrible start, getting off the line late and in a cloud of water and wheelspin. That let Nasr through for 2nd while Rupert Svendsen-Cook (Carlin) took the lead. A lap later and Fong had fallen back to 4th, and was having to work hard to defend himself against Pietro Fantin (Hitech Racing), chopping across to block the Brazilian. He wasn’t alone in going on the defensive; Svendsen-Cook was being menaced by Nasr and the Brazilian was looking very forceful. Carlos Huertas (Carlin) meanwhile, had got it all wrong and managed to drop down to 10th after the start. He wasn’t the worst off – that was Fahmi Ilyas (Fortec Motorsport) who had gone off before the first lap was over. There were suggestions that a Safety Car might be required but it turned out not to be needed, while Svendsen-Cook continued to lead from Nasr, Foresti, Fong, Fantin, Kevin Magnussen (Carlin), Buller, Jazeman Jaafar (Carlin), Jack Harvey (Carlin) and Huertas. However, something had happened to Magnussen, probably in the aftermath of Fong’s poor start, and he pitted very early for a new nose.

While Huertas tried his best to pass Harvey, Fong set an early fastest lap, and then found himself blocked by Magnussen who had rejoined just ahead of the Chinese and would proceed to make a thorough nuisance of himself for most of the remainder of the race by refusing to let anyone through if he could help it, despite being a lap down.

With the track starting to dry, and 40 minutes scheduled for the race, it seemed that we would have pitstops again, just as we had in race 1. However, no one looked inclined to start the stampede, probably because the sky was darkening again and it was anyone’s guess which way it would go. A twitch from Svendsen-Cook was enough to tempt Nasr to have another go, but it didn’t come off. He bided his time and at Druids he had another go, only to be rebuffed again. At Hawthorns he tried yet again, and again Svendsen-Cook held him off. Nasr was looking very determined though; as was Magnussen who was now giving Buller difficulties. Buller eventually found a way round, leaving the Dane to fend off Jaafar, thus making friends with most of his own team-mates. He didn’t seem to care – in fact he seemed to be having fun out there. Someone who wasn’t was Foresti, who managed to spin across to the gravel at Clearways, letting Fong back up to 3rd and slotting in behind Fantin in 5th.

Meanwhile the teams were getting ready with slick tyres, but as it was now clouding over again it seemed they might be a tad premature. As the mechanics waited at the ready, out on track Harvey was now having trouble passing Magnussen, and as a result Huertas got the jump on him instead, the Colombian’s greater experience levels helping him claim the place. As the fastest lap changed hands with almost every driver who crossed the line, Fong managed to fling himself off at Druids despite the drying conditions and eventually came back on last. The state of the track wasn’t troubling Nasr though and on lap 7 he finally got the drop on Svendsen-Cook, charging past at Graham Hill Bend and into the lead.

While Jaafar set a new fastest lap, Svendsen-Cook found himself losing ground to Fantin, while behind them Foresti was now back up to 4th, ahead of Buller, Jaafar, Huertas, Harvey and Hywel Lloyd (Sino Vision Racing). As soon as Nasr got into the lead he started to vanish down the road, leaving the pack trailing. However, his efforts were in vain. Pipo Derani (Double R Racing) took a dive at Max Snegirev (Hitech Racing) at Graham Hill Bend, pitching the pair of them into a spin. Snegirev rotated across the grass and back into the race, but Derani got stuck on the kerbs. The Carlin boys were now lined up in the pit lane with sets of wet tyres for their drivers, but no one came in. However, the rain must have taken that as a signal because from reaching the point were it looked as if we might start to see some pit stops for slicks, the rain pelted down, drenching the spectators and turning the track into a river. And that was the point when the Safety Car had to be deployed as Derani was still stranded and needed to be moved.

Nasr settled down to lead the pack, losing all the ground he’d made up to Svendsen-Cook, Fantin, Foresti, Buller, Jaafar, Huertas, Harvey, Hywel Lloyd (Sino Vision Racing) and Menasheh Idafar (T-Sport). 11th was Scott Pye (Double R Racing), Harry Tincknell (Fortec), Fong, Yann Cunha (T-Sport), Rookie Class leader Hylkema, Kotaro Sakurai (Hitech Racing), Snegirev and Magnussen who was still a lap down despite his best and most determined efforts. The rain stopped and restarted, and eventually they got the signal to restart. Nasr controlled it beautifully while further back Huertas attacked Jaafar for 6th in what was essentially a very big ball of spray at Paddock Hill Bend, only for Jaafar to take the place back again at Druids. At that point Jaafar had what looked like quite a big train behind him as Huertas held off Harvey, and Lloyd, Idafar, Pye and Fong closed up on them. Eventually they started to spread out again, while warnings were issued to Snegirev for not having his rear light on (presumably Derani had wiped it out for him) and Pye for not respecting track limits.

As the race wore on, it looked like it might not come to pit stops after all, though as the track started to dry out again, it was all down to tyre management. Could the drivers preserve their wet weather tyres as the racing line dried out or would they struggle – intelligence would be key now. And that man Nasr had it in spades, getting away from the chasing pack at a rate that suggested he was really in the zone now. now. As the fastest lap went to Magnussen, and Snegirev got ahead of Sakurai, Nasr was almost 10 seconds ahead of his nearest rival with 14 minutes left on the clock. Meanwhile Idafar spun into the gravel at Druids, never to return. He wasn’t alone. On the same lap Fong went off as well and he too was out of the race with 10 laps left.

They were followed into retirement a little later by Svendsen-Cook, who was savaged by Fantin in what could be charitably called an over-enthusiastic move round the outside at Paddock. In fact there was no way it was going to work, and Fantin was lucky to survive. Svendsen-Cook was not so lucky and limped into the pits and out of contention, his rear wing destroyed. Buller was lucky too as he had to thread the needle between the two in what was a very close call. Just to add to the fun, there were waved yellows at Surtees, where Snegirev had spun, dropping back to last but one.

Nasr, meanwhile, continued on his imperious way to the flag, setting fastest lap after fastest lap and increasing the gap to Foresti, who had gratefully accepted 2nd after Fantin’s ninja attack on Svendsen-Cook, from nine to 18 seconds in just four laps. It was an impressive demonstration and there was nothing anyone could do about him. Foresti lost even more ground when he managed to spin at Druids, but he came back on without losing a place. He was lucky perhaps. Certainly it caused Buller to run wide and Jaafar was waiting in the wings for the slightest opportunity to get onto the podium.

After 40 minutes, Nasr came home to his 4th win of the season, increasing his points lead to 45 over Foresti, who finished 2nd. 3rd was Buller, from Jaafar, Huertas, Harvey, Lloyd, Pye, Tincknell and Fantin. In 11th was Cunha, just ahead of Snegirev, who passed the Rookie Class runners again towards the end. 13th overall and the Rookie Class winner was Hylkema, from Sakurai and Magnussen.

The fastest laps were set by Magnussen and Sakurai.

Weather: Variable in the extreme.

BF3 Series Heads To The Nurburgring