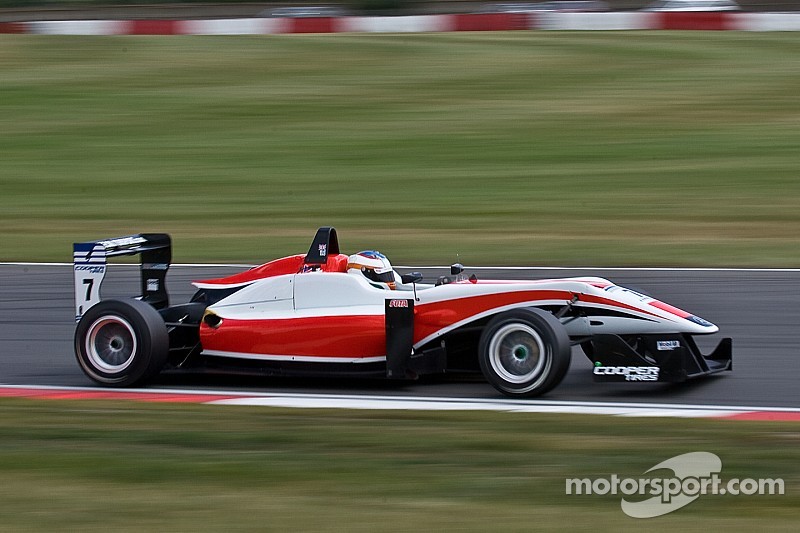 Matt Rao is firmly at the top of the times for Race 1 and 3.

At Thruxton this morning, the battle between the two Fortec Motorsports drivers Matt Rao and Martin Cao for the lead of the British F3 series resumed, with Rao, who has steadily improved during the season, getting the better of the battle for pole position and claiming the top spot for Rounds 13 and 15 over Cao. Li Zhi Cong (Carlin) starts Race 3 from 3rd while new boy Max Marshall (Double R Racing), making his F3 debut, has the same position for Race 1.

With just five cars showing up for this meeting, the series is clearly in serious trouble, Andy Chang having left for the FIA F3 European Series, and none of the promised extra drivers who had hoped to race here showing up either, the writing is now on the wall unless something drastic is done. For what seem to be fatuous reasons, most of the new “stars” don’t want to race on non-GP circuits, forgetting that actually learning to race is far more critical than learning circuits where there is plenty of data available to them anyway before they get there! Rant over…

Needless to say with so few cars no one was in any great hurry to get out there, Marshall seeming to be keener than most, along with Camren Kaminsky (Double R Racing), the pair of them circulating together for a while. Li also came out and was soon on top of the pile by virtue of being the only driver to complete a flying lap. Kaminsky was 2nd with a lap time of 4:05 but then a lap later he actually set a “proper” time and one lap after that he was 0.311 seconds off Li.

With 20 minutes of the session left, we still hadn’t seen Rao or Cao turn a wheel, which left the other three to fight among themselves, Marshall getting ahead by 0.173 seconds, using knowledge gained from an earlier trip in Formula Ford to this high speed circuit. While that was going on Rao finally came out to play, soon getting down to some sensibly quick times.

Meanwhile Kaminsky improved to 2nd, while Li dropped down the order, the gap to pole from 2nd now 0.133 seconds. And then Rao banged in his first real flying lap, going to pole by half a second from Kaminsky, who was now half a second ahead of Marshall. This looked likely to change quite soon though as Cao now emerged onto the track to join the very select party. It was as well Rao and Cao where hear because it at least provided the prospect of some sort of race, the two being reasonably well matched in terms of pace.

This was demonstrated when Cao moved up to 2nd, just 0.229 seconds off his team mate. The next lap he was even closer, being just 0.176 behind. Kaminsky stayed 3rd from Marshall, but then an unexpected flying lap from Cong moved him back to 3rd. Marshall improved to go 4th, then Li went 2nd as the gap covering the five if them shrank dramatically. A lap later and Cao took 2nd back from Li, 0.034 seconds off Rao. The top three were now in the high 1:07s which is pretty respectable around here, though no one was close to the lap times set by Jean-Eric Vergne when the F3s were last here in 2010.

The session was now almost at an end and the times had now stabilised with Rao firmly at the top of the times for both races, from Cao. The other grid places for Race 1 went to Marshall, Li and Kaminsky, while the order for Race 3 will be Li, Marshall and Kaminsky.