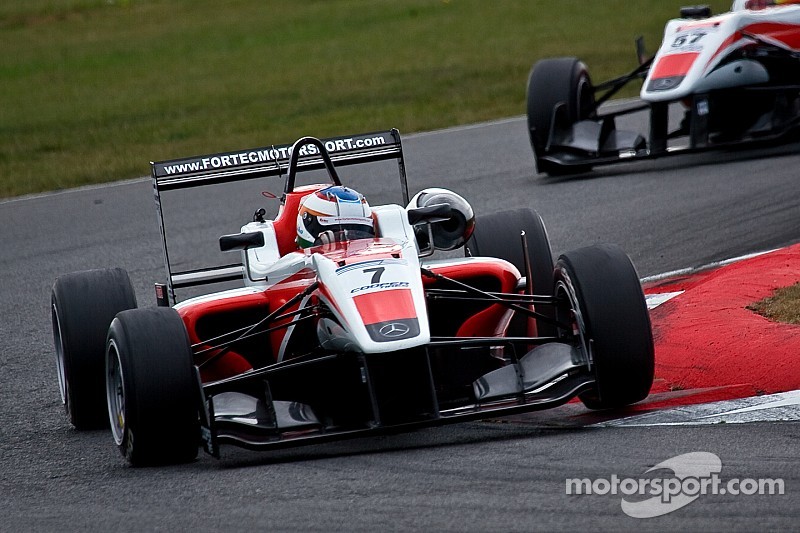 At Thruxton this afternoon victory once again went the way of Fortec Motorsport, this time in the shape of Matt Rao, who had his revenge on team-mate Hongwei “Martin” Cao by relieving him of the lead early on and then coasting to a fine victory to remain at the top of the leader board with a 4 point lead and 6 races still to run. Cao finished 2nd ahead of Camren Kaminsky (Double R Racing), the American’s weekend improving from race to race after a disastrous first race on Saturday.

At the start, it was Cao who claimed the lead to be in front of Rao by the time they reached the Complex, while behind them Li Zhi “Peter” Cong (Carlin) had run into trouble after the team opted to run much less down force on his car for this race. They might just have taken it too far, because coming into Goodwood for the first time, Li spun off and was only able to rejoin after the others had vanished into the distance. After two podiums from the first two races, it was a bit embarrassing for the Chinese driver.

Meanwhile Kaminsky was coming under pressure from his rookie team-mate Max Marshall, who was 4th and right on the rear wing of Kaminsky the first time they came tearing into the Chicane, just behind the lead pair of Cao and Rao, the former locking up as he bounced over the kerbs as he tried to keep his own team-mate at bay. Li was now a very distant 5th, so the main interest was in seeing who of Cao and Rao would come out on top.

The chance Rao had been waiting for

For several laps Rao held station just behind Cao, ready to pounce whenever the opportunity arose, but for what felt like a very long time, Cao simply did not oblige him with the slightest error. However, as the race wore on the tough nature of this circuit started to take its toll, and the tyres on Cao’s car started to deteriorate, leaving him with rather more oversteer than he cared for. That was the chance Rao had been waiting for, and he moved alongside the Chinese driver as they tore down towards the Chicane for the 9th time. Rao drafted past using the tow and Cao could do little to stop him, though he was clearly not about to let the Englishman get away if he could prevent it.

For several more laps Cao menaced his team-mate, always threatening to retake the lead but not quite able to get the necessary slipstream to do the job. Rao, meanwhile, was working very hard to try and break the tow and open up a gap, and in that he was helped by the steadily degrading tyres on Cao’s car reacting to the combination of heat and stress being piled on them. Eventually he could hold onto Rao no longer and the gap began to open out, much to Rao’s relief.

The Kaminsky/Marshall battle was also proving lively, Marshall trying to make up for losing out on the grid by trying all sorts to pass the American. That too eventually broke apart, as Kaminsky started to open a gap as he set off in pursuit of Cao. In that he was aided by Marshall also suffering tyre wear as well as lack of mileage in an F3 car which made life rather tough for the debutant all round. He would finish 4th and was awarded the driver of the weekend trophy for his troubles, though he would have preferred a “proper” trophy if at all possible.

Behind them, Li was now in all sorts of trouble, the car handling badly in the corners, which meant all he could do was hang on until the bitter end to at least score some more useful points, even if he would have liked a third podium.

Rao was a very happy winner, with Cao still only 4 points behind in the championship chase. Kaminsky was a slightly distant 3rd, from Marshall and Li.

The fastest lap of the race went to Rao for the second time this weekend.