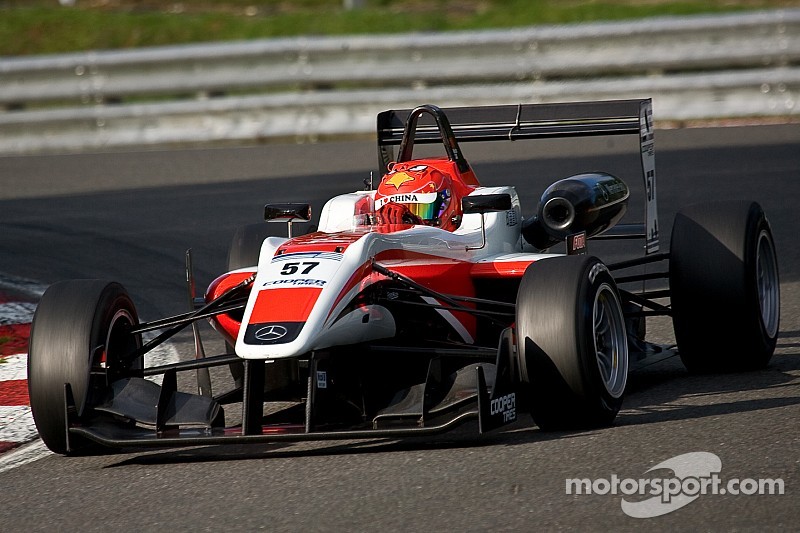 Martin Cao is the new champion of the 2014 Cooper Tires British F3 Championship.

At Donington Park this afternoon in the final race of the 2014 Championship Hongwei Cao (Fortec Motorsport) finally clinched the championship over team-mate Matt Rao. Rao drove a copybook race, leading commandingly from start to finish, and scoring the extra point for fastest lap, but in the end it wasn’t enough.

All Cao needed to do was finish the race to be crowned champion. 2nd in the race went to Max Marshall (Double R Racing) after a fine fighting drive, while team-mate Camren Kaminsky finished 3rd.

At the start of the race, it became clear that Cao had opted to play it safe, which was a shame. The series leader didn’t take his place on the grid alongside Rao, but instead opted to start from the pit-lane thus depriving a sizeable crowd of the possibility of one final scrap between the pair. You could see his point, but it was still a shame.

When the lights went out to signal the start, Rao made the perfect getaway while behind him Marshall was on the attack on his three good tyres, trying to find a way past Kaminsky to claim 2nd. Cao, meanwhile was 6 seconds adrift of Li Zhi Cong (Carlin) and showing no inclination to get involved with anyone else if he didn’t have to. And so far he didn’t have to.

Even though he must have known the odds were against him, it didn’t slow Rao down any. He continued to push as hard as he was able, looking for that point for fastest lap. Behind him, Marshall made an attempt to slip up the inside of Kaminsky at the Melbourne loop hairpin, but couldn’t quite make it stick. A lap later and he was ready to give it another go. This time he opted for the outside, and once again had to back off. It would be third time lucky, as it turned out. This time he was through and that would be pretty much the last Kaminsky saw of him as he set about trying to close down Rao.

That was enough to get Rao moving even faster, and he quickly set another fastest lap of the race, then another, and then another. Marshall too was getting faster but was losing out on the gear changes and knew he probably just didn’t have a fast enough car. It didn’t stop him trying though!

Champion by a mere two points

Behind him Kaminsky was now coming under pressure from Li, the Chinese driver trying his best to pass the American but not quite being able to manage it. He remained very close, but no matter what he tried he couldn’t make it stick. A slightly desperate attempt to sell the Double R driver a dummy in the closing stages nearly led to both of them going off, but both drivers survived, their positions unchanged.

Up front, Rao was untouchable, with Marshall unable to close the gap, but at least now well clear of the Kaminsky/Li scrap. Cao continued to sit there in 5th, quietly minding his own business, but he must have been wondering whether he was going to end up tangling with Li whether he wanted to or not.

In fact, as the race wore on, Marshall was setting faster laps than Rao, but Rao then simply raised his game once more, speeding up and setting yet another fastest lap. There was some slightly ragged cornering going on now as the lead pair pushed each other ever harder all the way to the flag.

And so Rao came home to victory once again after a fine drive, but Cao (finishing 5th) was champion by a mere two points. There have been closer finishes in the past – 1990 springs to mind – but at least the battle went down to the wire, and on their 23rd attempt Fortec Motorsport have finally won a British F3 title. 2nd was Marshall, from Kaminsky, Li and of course Cao.

Fastest lap of the race was set by Rao.