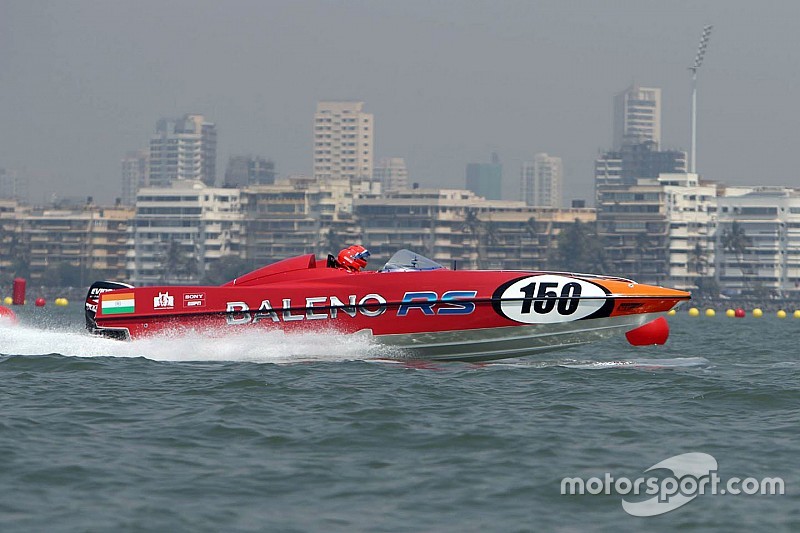 However, the #150 boat of Coleman siblings fought back, regaining the top spot before the end of the first lap. They went on to win the race, adding to their British P1 triumph.

Behind, #95 Mavericks’ John Donnelly (co-driver Kevin Burdock) quickly made his way up the pack, passing a slew of drivers to finish in second place.

Meanwhile, Norvill fell back into the clutches of #21 Llyod Dolphins’ Craig Wilson (navigator William Enriquez). The two drivers went head-to-head for the next few laps, before Wilson was able to get his nose ahead on Lap 3.

The #21 boat of Wilson claimed the final spot on the podium, ahead of Ultra Sharks’ Neil Jackson (navigator Jason Jackson).

Marlin’s Norvill eventually finished down in fifth place, after his strategic gamble to complete mandatory long laps early in the race failed to pay off.

Coleman doubles up in Race 2

In stark contrast to Race 1, Sam Coleman made a breathtaking getaway from 10th position in Race 2 to immediately put himself in contention for victory.

Lap by lap, the British driver scythed his way through the traffic, taking the lead in the first quarter of the race.

While the battle for the lead was settled early on, Norvill and Donnelly went neck-to-neck for the runner-up spot on the podium.

In the end it was Norvill who took the second spot, with Donnelly tumbling over on the final lap to bring a premature end to the race.

Two-time APRC champion Gill built on his Race 1 result to finish fifth, while Santosh also upped his pace to take ninth at the chequered flag.

The two Indian competitors were made to start from back of the pack in both races to ensure they do not disrupt their more seasoned rivals.

However, that will change for tomorrow with both Gill and Santosh allowed to start according to their original grid order, which will be decided on the basis of their cumulative points from Race 1 and 2.