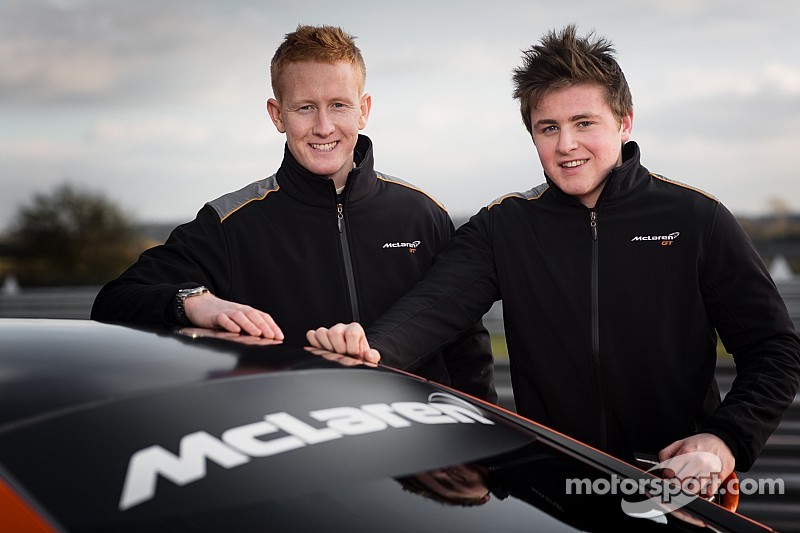 Ross Wylie and Andrew Watson are racing a McLaren 650S in this year’s British GT Championship after being signed to the iconic British marque’s young GT driver scheme. Jamie Klein caught up with the pair.

Though McLaren may have opted for experience over youth when it came to selecting Fernando Alonso’s Formula 1 team-mate for 2015, its GT arm has taken quite a different approach.

The names of Ross Wylie and Andrew Watson are likely to be unfamiliar to the majority of race fans, but the fact they were chosen to spearhead McLaren’s attack on the British GT is a clear vote of confidence in their abilities.

The young British pairing will share a brand new GT3-spec 650S, run by former McLaren F1 team manager Dave Ryan’s VonRyan outfit, as they embark upon their first steps in what they hope will be a long and successful association with the British marque.

“Winning the GT4 championship last year was very important, as I was invited to a test drive after that, which went really well. After a few more talks the opportunity came along, and I wanted to grab it with both hands.”

Asked about the step up in performance compared to the GT4 machinery he is accustomed to, Wylie added: “There’s not much difference in terms of straight-line speed; the biggest difference is the in the aerodynamics. The McLaren feels a bit easier to drive, as it has more downforce.”

Explaining how he ended up getting the call from McLaren, 19-year-old Watson, a race winner in the BTCC-supporting Ginetta GT4 Supercup series, said:  “[Leading British GT driver] Jonathan Adam did some driver coaching with me last year, and he had some good things to say to McLaren about me; before then, it was looking like I’d be back in Ginettas.”

“Just to be under the McLaren GT umbrella is brilliant – VonRyan is a really good team and Dave Ryan’s got so much experience. I’m targeting a career in sportscars, and the fact I’m getting this experience while I’m so young puts me in a good position.”

The potent combination of two McLaren-backed youngsters sharing a 650S in a factory-blessed team should be a title contender in British GT this season, but both Wylie and Watson are taking nothing for granted.

“No doubt we’ll be competitive, but we’ve got a lot of ballast to carry as we’re both silver drivers,” explained Watson, referring to the rule that hands a weight penalty to any car running without a gentlemen (bronze-rated) driver.

Wylie was also wary of setting expectations too high due to the unknowns surrounding the extent to which the 650S could be pegged back, adding: “We’ve done plenty of miles over the winter, but we’re not sure about performance yet, as that’ll come down to the Balance of Performance.”

Even so, both drivers have what it takes to fight at the sharp end of the British GT field, and despite the potential obstacles the series’ rulebook presents, the stage is set for McLaren’s bright young things to announce their arrival in the sportscar racing world this season.