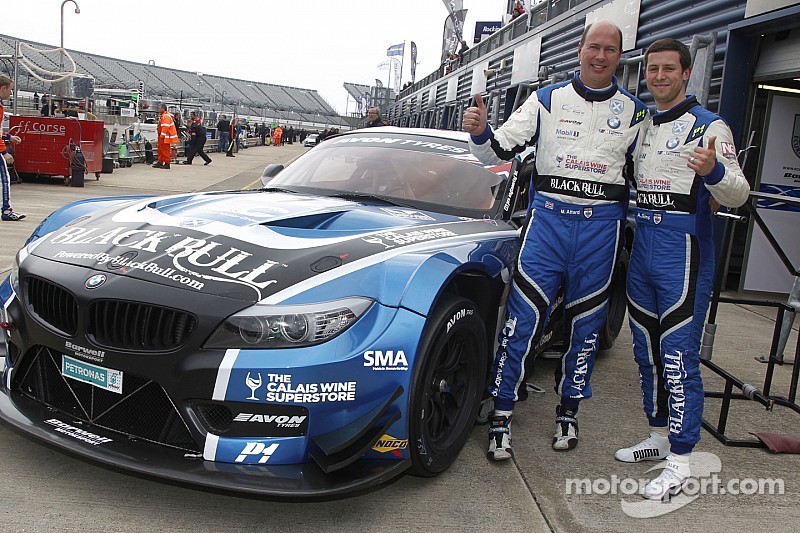 Defending champion Marco Attard and Alexander Sims took their first British GT win of the season with an accomplished performance at Rockingham.

After qualifying four tenths clear on pole, Sims and Attard were always likely to be the combination to beat, but it took a small error from Daniel Lloyd to make sure.

Knowing they had to serve a five second success penalty carried over from the last round at Oulton Park, Attard defended resolutely from Ahmad Al-Harthy in the race’s opening stint, ensuring Sims emerged from the pits on Lap 33 with only a small deficit to make up.

“Ahmad drove well, I’ve got a lot of respect for him and vice versa. I just had to keep him at bay; I wasn’t going to let him past and I didn’t let him past, but it was all good and fair,” said a delighted Attard afterwards.

Carrying an additional 70 kilos, Lloyd was always going to struggle to resist Sims’ charge, but did so admirably for 20 minutes before making a small mistake at the Deene hairpin while negotiating slower traffic.

Sims seized the opportunity and promptly made his escape, surviving a late safety car to finish 10.4 seconds clear of Lloyd, who just managed to hold off team-mate Rory Butcher with a progressively worsening throttle problem.

“You never have any doubts when Alexander gets in that car; if anyone can do it, he can,” added Attard. “He is the fastest man out there and if I do make a slight mistake, he will always make up for it, so we had no worries. We’re very happy.”

Despite missing out on the victory, Lloyd was content to take home a decent haul of points after a difficult Oulton Park weekend.

“It was extremely difficult,” Lloyd reported. “It was a case of killing it in the middle of the corners, getting a gap and hoping for the best with the GT4s but unfortunately they ruined my chances, I had to go around the outside and hit the marbles and there was I could do.

“I was battling away for ages, I asked my engineer how long was left and he said ‘50 minutes’. It was kind of inevitable in a way, but to be honest I was shocked that I was even able to hold him off for fifteen minutes. I guess you never know, but I’m really happy with second.”

Motorbase team manager Dave Bartrum echoed those sentiments, as his team scored a double podium for the first time this season.

“Obviously we’d like to win, that’s what we’re here for, but it’s a great team result and the drivers were superb,” he said. “There was that little moment when you get them both together on the circuit, but the rules of Motorbase are that they’re here to race and so long as they race fairly and don’t touch, you’re okay.

“Dan showed a great pace today, it’s a shame he had that little moment because he was doing a great job. Bearing in mind we carry 70 kilos on that car, I’m very proud of both drivers.”

Both had been passed by a fired-up Adam Carroll, although the Northern Irishman, sharing with Gary Eastwood, was promptly given a black flag for an earlier clash with James Harrison which left the GT4 Aston Martin languishing in the gravel at Tarzan.

Suffering from exhaust damage after Lee Mowle was assaulted on the opening lap by Salih Yoluc – who blotted his copybook further by clattering into Von Ryan McLaren team-mate Ross Wylie – Rockingham specialist Joe Osborne did well to hold onto sixth and even challenge Bell in the latter stages.

Jonny Adam and Andrew Howard – delayed by a 15 second success penalty from Oulton – finished seventh and Phil Keen and Jon Minshaw rounded out the top eight.

Having raced their way past the eventual-third placed Griffin and Butcher in the opening stages, Rick Parfitt and Tom Oliphant could well have sprung a surprise from 12th on the grid in their LNT Ginetta, but a debilitating alternator problem, followed by a frightening 140mph blow-out at the banked turn one firmly put paid to that. Afterwards, Parfitt could only smile.

“I’ve always been quick around this circuit but for whatever reason I’ve never finished,” he said. “I didn’t expect to make so many places so quickly – I was just waiting for the race to come to me, but the car was absolutely brilliant.

“If we had carried on like that I see no reason why we couldn’t have finished on the podium, but we’ve shown that we can fight with the big boys and when the car lasts the course we can be right up there.”

In GT4, Beechdean AMR youngsters Jamie Chadwick and Ross Gunn were never headed, pulling out a lead of over a minute over the chasing pack.

After the GPRM Toyota of Richard Williams and Stefan Hodgetts hit trouble, Academy Motorsport’s Will Moore and Dennis Strandberg came through to second, with Jake Giddings and Kieran Griffin completing an Aston Martin podium whitewash in third.