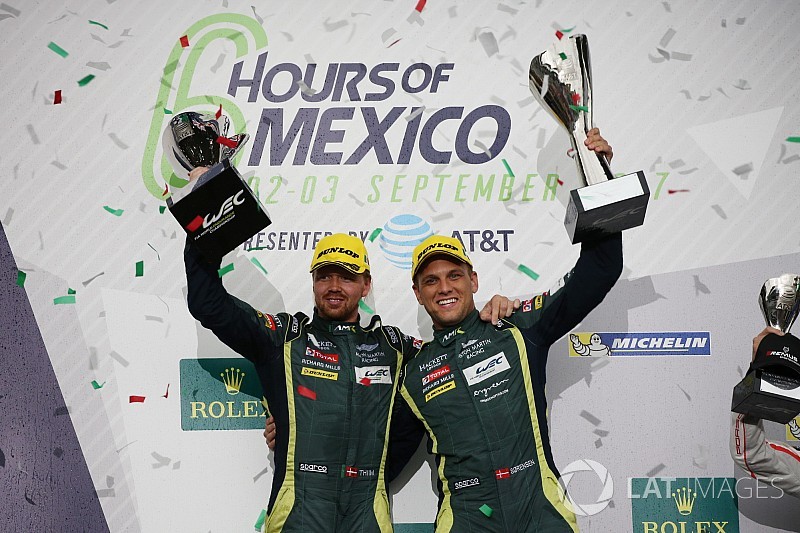 The Danish Aston Martin drivers, who won the WEC GT drivers' crown together in 2016, will join Tom Ferrier's team to share with amateur drivers Derek Johnston and Mark Farmer.

Sorensen, 27, will share with Johnston in the 2016 championship-winning car, while Thiim, 28, will partner Farmer in the sister chassis.

The deal means Thiim and Sorensen will both make their British GT debuts in 2018.

The pair shared AMR's number 95 Vantage GTE Pro entry in the WEC in 2017 winning in Mexico and finishing fifth in the world championship.

With the WEC now spread over a 13-month 'superseason', Aston Martin's factory drivers have a greater availability for customer teams in national series.

TF Sport boss Tom Ferrier said: "To have Nicki and Marco join us is a great story. They are some of the fastest guys in GT cars and having worked with Nicki last year I have experienced that first hand.

"Derek and Mark are going to have to raise their game to keep up with these guys. If they do that they will be winning races from the outset."

Sorensen said: "I last raced in the UK in Formula Ford back in 2008, so the first thing I did was look up the tracks and they're all the same as I did back then.

"To start a new series with TF is exciting as they're a top team that knows how to win.

"I'm not used to the Pro-Am format, but I'll be coaching Derek and I'm sure we'll have a great battle for wins and the title."

Thiim is looking forward to returning to TF Sport having raced for the team in the European Le Mans Series.

"I had a great time with TF in the European Le Mans Series this year and this is a new adventure," said Thiim.

"As circuits go I know Brands Hatch [from the 2006 Formula Ford Festival] and Silverstone, but I have to learn the rest."

Sorensen and Thiim replace Jonny Adam, who has switched to Optimum Motorsport, and Jon Barnes, who is searching for a drive.