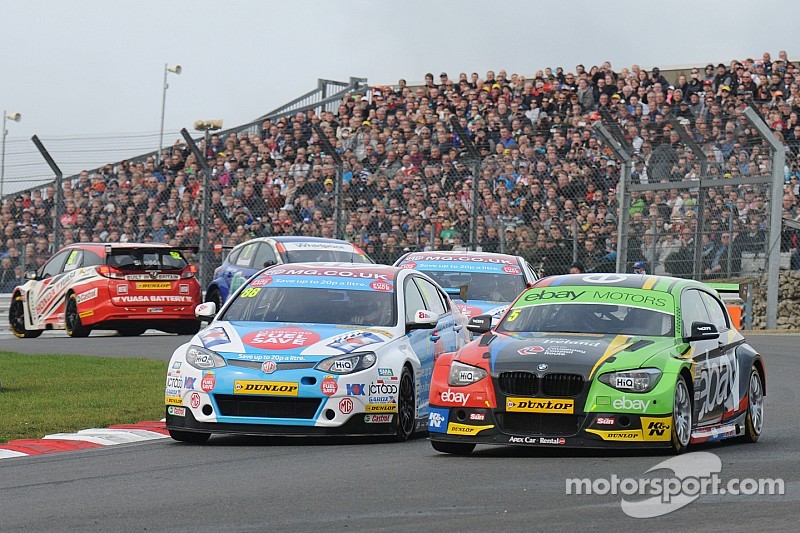 Some big names, including our 2014 champion don't know where they'll be next season.

With the 2014 Dunlop MSA British Touring Car Championship long decided and 2015 fast approaching, the BTCC merry-go-round is in full swing. So here is a round-up of what has happened since the chequered flag went down at Brands Hatch in mid-October and what we can expect before it restarts again at Brands in April.

An uncertain future for our 2014 champion

We start off with quadruple 2014 champions West Surrey Racing, where it looks like we have a classic case of de ja vu in progress. Just like in 2009 when Colin Turkington won the championship for the first time, then title sponsors RAC pulled out and left Turkington without a drive, now eBay Motors have departed and left serious question marks over the Champions continued participation within the team. Recently at the Autosport awards, where Turkington was awarded National driver of the year, he said, “With eBay not being involved it is making it difficult for me to be there, it came as a real surprise to all of us.  My number one priority is to be on the BTCC grid and I am talking to other teams. At the moment I am unattached."

Collard and Foster out at WSR?

Despite the loss of eBay, WSR have been quick to announce their first driver for 2015 with Sam Tordoff joining the team from MG. There has been no news yet on Rob Collard and Nick Foster who have driven for the team since 2010 and 2011 respectively although it is likely that Foster will probably depart the series, while the team have also admitted that they have been in talks with Triple World Touring Car Champion Andy Priaulx nevertheless a clash between Rockingham and his commitments in the ELMS with BMW could prove a stumbling block.

Where will veteran Jason Plato end up?

Newly crowned Manufacturer Champions MG have announced that they will be back albeit with an all new look with both drivers and sponsors. With Tordoff already having departed to WSR, it has also been confirmed that Jason Plato will move on along with his Tesco KX Momentum sponsorship. No drivers have yet been confirmed but the team have always said they would welcome back Fabrizio Giovanardi with whom they won two titles and brought into the series back  in 2006 while Turkington, who drove for Triple 8 in 2005, could also be a long shot although for either to come in the team would need to find a title sponsor, however talented youngster Tom Ingram could be a possibility.

As for Plato with little options seemingly on the grid the most successful driver in the series history for wins could have an ace up his sleeves and bring in a new manufacturer to the series.

Honda's plan with F1 now on their plate

Little noise has so far come out of Honda/ Team Dynamics never the less it seems certain we will see the team return with the new Civic Type R for 2015 but there have been question marks over Honda’s continued support in the series as they return to F1.

Triple Champion Matt Neal recently announced through Twitter that he had been to visit next year’s new car model at Honda’s factory at Swindon likely to be the new Civic Type R and its believed that a continued driver line up of Neal and Gordon Shedden along with the new car will be announced at the Autosport show in early January.

Fellow Honda team Eurotech/ Pirtek Racing have also yet to confirm their plans although lead driver and 2013 BTCC Champion Andrew Jordan had said prior to the end of the season that he hopes to be in the same car as the works team for 2015 before later tweeting after the season finale “Had a sit in my 2015 race car today. Fits like a glove....;)” Jeff Smith has returned to the team having previously driven for the team between 2011 and 2013 now as part team owner while 2014 driver Martin Depper owns the car he drove last year and it remains to be seen where everyone fits in and in what car for 2015.

The biggest new arrival so far for 2015 is Infiniti Racing who will be entering the series as a full manufacturer entry with support from and will include working with injured servicemen from the Parachute Regiment. The drivers will be BTCC debutants Richard Hawken and Derek Palmer with the team being run by Palmer’s Pro Motorsport. Both drivers have recent been driving Super Touring Nissan Primera’s in the HSCC Super Touring Car Series.

Speaking upon his arrival in the series and joining forces with Infiniti and Support our Paras Palmer said, “The concept is fresh to touring cars, I think, and I think there’s no better platform in the World, definitely the UK, to do that with. There’s a lot of manufacturers in the BTCC, a lot of people go to watch it, there’s a great fanbase and it gets great TV coverage as well. I think the relationship with Infiniti and Support Our Paras is a great thing.”

Another major team to lose their title sponsor for 2015 is Motorbase who announced Airwaves would leave the team prior to the last race of 2014. The team had previously admitted that they were looking into the possibility of designing and building a BMW 3 series to run next year though they have already confirmed that Alex Morgan, who has spent the last three years racing Ferrari’s, will drive one of their current Ford Focus’ under the name of his longtime sponsor Dextra Racing.

Chrome Edition Restart Racing have certainly made a big impression in their short time so far in the series with 4 VW Passats taking two wins in 2014. Aron Smith the driver who took those two wins will definitely continue with the team while team boss/owner Warren Scott is also likely to continue. After running Alain Menu last season expect to see another big name in the team in 2015 either with Menu continuing or if Turkington leaves WSR the reigning Champion, as he tested for the team prior to the 2014 season and wouldn’t be required to bring in the budget.

After making single round appearances both in 2013 current Clio Cup Champion Mike Bushell will replace Dave Newsham at AmD Tuning.com driving their Ford Focus after he raced at Knockhill in 2013 for IP Race Tech Engineering. The other driver being Andy Wilmot, who made his single outing at Rockingham with Team Hard, will replace Ollie Jackson at Welch Motorsport driving one of their Proton’s as they look to improve on a nightmare 2014 probably reverting back to the Swindon engine alongside regular drive Dan Welch.

Adam Morgan will return with Ciceley Racing although he won’t be the only Mercedes on the grid after announcing they will build a second Mercedes for Aiden Moffat and his Laser Tools Racing team after the two teams linked up mid 2014. Meanwhile Moffat’s Chevrolet Cruze saloon has gone to Chris Stockton and BTC Racing to replace his Cruze hatch he raced last year.

Simon Belcher has confirmed that he will return with his Toyota Avensis from Handy Motorsport meanwhile their sister team Speedworks despite not confirming a driver as yet have confirmed they have Top engineer Geoff Kingston joining the team.

Other drivers likely to join the series are Nicolas Hamilton, brother of course to current F1 Champion Lewis, and 2014 Clio Cup runner up Josh Cook who hopes to enter the series under a similar initiative to Infiniti Racing with Racing for Heroes.

Expect the BTCC news now to go quiet over the holiday season, however much news is expected to be announced at the annual Autosport International Show starting on the 8th of January. Motorsport.com will as ever be present at the show and will bring you full news from the show following the event.

Should the BTCC adopt a ‘showdown’ points system?

Andy Priaulx competes in the BTCC, ELMS and selected USCC races in 2015