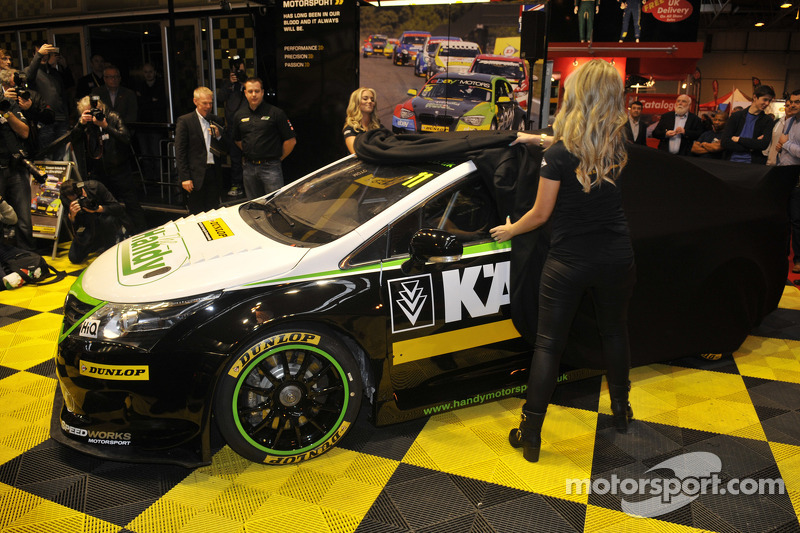 A look at all the big unveils and news about the BTCC that came from the Autosport International show.

This year’s annual Autosport International show, which was held over the weekend as ever at the National Exhibition Centre in Birmingham, featured a larger British Touring Car Championship presence than ever, with many cars and drivers in attendance which led to plenty of announcements and several unveilings/public debuts of 2014 machines.

The main focal point for all things BTCC came from title sponsor Dunlop and their Dunlop/BTCC stand. Sitting pride of place on the stand was last year’s champion’s car, Andrew Jordan’s Pirtek Racing Honda Civic, now sporting number 1 on the door for the first time.

Jordan was also present, sporting a Red Bull hat after he announced that he had become a Red Bull driver for 2014. The car itself will not carry any Red Bull branding but Jordan will wear a Blue and Silver Red Bull helmet, which was on display on one of the many exhibitor stands at the show. 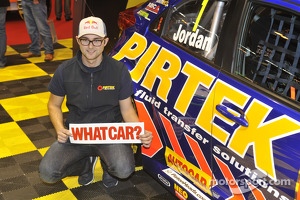 For the second year in a row KX energy drink sponsored the main stage, which featured the MG KX Momentum Racing MG 6 GT on display. Lead driver and head of the KX Academy Jason Plato spent much of the weekend on the stage not only speaking about the academy but the BTCC where he admitted that he “Should have won” last year admitting, "Not taking anything away from Andrew Jordan because he had a fantastic year and was a deserving winner, but we kind of gifted it to him really. We had five DNFs and had we had one less we would have won it. In three of those DNFs we were leading. We had the quickest car in the second half of the year but we just had too much bad luck or made mistakes as a team - and that includes me. We let it get away from us."

Plato will be joined at MG for the second season by Sam Tordoff, who not only retains his MG drive but remains with the KX Academy for 2014. Tordoff impressed immensely in his debut full season, taking a victory and a pole as well as several other podium finishes taking 6th in the driver standings. Following his hugely successful debut year, Tordoff now admits that the title is a realistic goal for 2014 and that includes beating his mentor/team mate Plato and said, “The first thing you have got to do is beat your team-mate, and it’s not easy to do when it’s Jason Plato. There are no excuses really – I have all the tools at my disposal, and there’s no reason why I can’t beat him.” 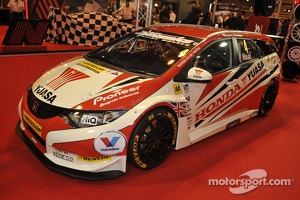 One of the most anticipated debuts at the show was the Honda Yuasa Racing Civic Tourer Estate, which was on public display for the first time. Following 5 titles out of 6 in two years (the other being won by Jordan, still in a Civic) Honda have taken the brave decision to replace the all conquering Civic hatch as they enter an Estate car in the BTCC for the first time in 20 years.

The car was placed on the Team Dynamics stand, the men behind the Honda project and received plenty of attention all weekend. Both drivers, triple champion Matt Neal and Gordon Shedden were present at the show on all 4 days giving their opinion on the new car. Despite the obvious difference the car is largely the same as the old Civic and last year’s runner up and 2012 champion Shedden, still predicts to be quickly up to speed and said, “It's still got the heartbeat of the Civic. We've won the championship in the hatchback and the aim is still to fight for the title. There's a lot from the old car that transfers and we got to grips with the NGTC Civic pretty quickly."

On the opening day of the show, the place to be for all things BTCC was very much the Dunlop stand and it wasn’t long before we had our first unveiling of the show as Rob Austin took the wraps of his Audi A4 for 2014.

Austin, who took a hugely popular victory at Rockingham in 2013, confirmed that he had signed a 2 year deal to race under the name of Exocet Racing and will compete in a black Audi with flames up the side of the car in the same livery which he ran Jake Hill in the final race of 2013. 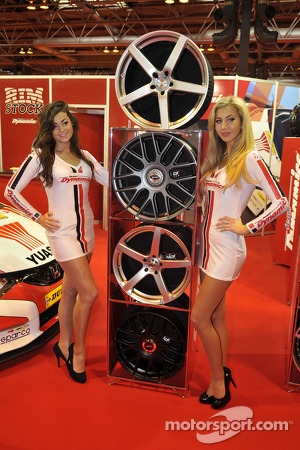 Austin had hoped to run himself in the same yellow Wix Filters livery as last year and Hill under the Exocet banner, however following Wix’s switch to rival team Cicely Racing, Austin will run the fire breathing black Audi and hopes to run another driver, who will bring in his own sponsorship money.

Shortly after Austin’s unveil it was newcomer Simon Belcher’s turn to take the wraps off his Handy Motorsport Toyota Avensis, as both him and the team graduate from the Clio Cup for 2013 with continued backing from longterm sponsor Karcher.

This was followed on the Dunlop stand by the announcement that Ollie Jackson will join Dan Welch in a second Proton at Welch Motorsport after competing last year in the Speedworks Avensis. Speaking about the step up to two cars Welch said, “It is exciting times. The team is growing. It has always been the plan to run two cars, and it is the first year we have been able to get it together early enough. It is all coming together – the ducks are all lined up, and it is going to be really good.”

Jackson is also delighted to be joining Welch and speaking about the move the former Speedworks driver said, “Dan approached me a couple of weeks before Christmas and it has gone from there. We have been talking over Christmas and we finalised it last weekend and they are a great bunch of guys here, I’m really excited.” 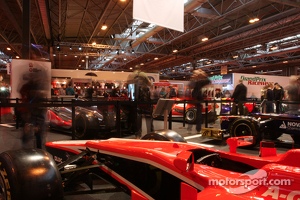 Ending the first day was the news that for the first time in the series history an American will join the series for a full assault on the championship in the shape of Robb Holland. Holland has raced in 3 BTCC meetings over the last two years but is now set for a season long drive with his regular team Rotek Racing.

Holland and Rotek are set to enter and are already mid-build of the brand new Audi S3 which will be sponsored by Oakley Sunglasses. Despite the religious following of some Motorsports in the US it was always the BTCC which took Holland’s interest and he admits it is a “dream” to enter for a full season and said, “Being the first American full-time entry in the BTCC is a huge achievement for both Rotek Racing and I. This is the culmination of several years of hard work and, because the BTCC is what got me into racing in the first place, joining as a full-time entrant is definitely a dream come true.”

The final car to get its public debut was the ex Motorbase Ford Focus, now in the hands of AmD Tuning.com. It was announced before Christmas that Dave Newsham will join the team from Speedworks and team boss Shaun Hollamby admitted on the Autosport stage that there are no excuses not to be challenging for wins and podiums and said, “We have a winning car, a winning driver, now it’s down to the team.”

The final car on display at the show was the West Surrey Racing prepared eBay Motors BMW 125i M Sport. Following a low key start to the season the returning 2009 champion Colin Turkington went on to take 5 victories and still mathematically went in to the final event of the year with a chance of taking the title.

No drivers have yet been announced but former WSR driver Stephen Jelly and former BTCC racer now WTCC driver Alex MacDowall have tested for the team since the end of the season. Turkington was present at the show and speaking on the main stage, alongside the 4 other BTCC champions on the grid, heavily hinted that he was set for a return with WSR but insists no deal is done yet although close and said, “I can’t say just yet exactly what’s going to happen this year – like many people we’re still dotting the i’s and crossing the t’s, but hopefully in the next couple of weeks we can make an announcement.”

Another top team yet to confirm its drivers is Motorbase Performance. Team boss Dave Bartrum confirmed that the team once again will get backing from Airwaves Racing as title sponsor and is delighted to continue its long standing partnership in what he describes as the team’s biggest year and said, “It’s great that Airwaves is staying with us, and we’re very grateful for that. They’ve been a big part of us for many years and I’m looking forward to building on our relationship. We’re very happy with changes we’ve made to the car and the team, our engineering staff has been beefed up, so we can’t wait to get started. There’s a lot to prove this year, so for us it’s going to be our biggest year.” 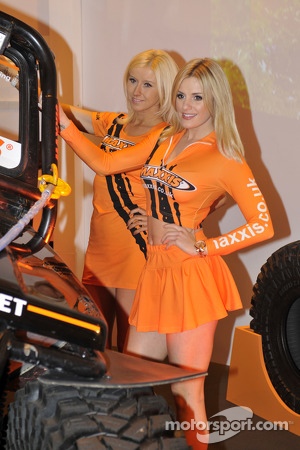 Motorbase certainly had the most tongues wagging at the show over its potential driver line up after it was confirmed that the team was in talks with 2 former BTCC champions for 2014. Rumours have it that they are very close to signing one former champion that hasn’t been in the series for several years.

Two other drivers who attended the show and confirmed 2014 plans were Aiden Moffat and Chris Stockton. Moffat, who became the youngest ever driver in the series after competing at Knockhill, has purchased the Chevrolet Cruze used and built by Andy Neate and his IP Tech Engineering team and will run the car under his own family run team. Stockton will also race a Cruze albeit the hatchback design after he had hoped to run it last season. Sadly the car was never finished in time but his BTC Racing team have now finished the car and have secure the TOCA licence required to race in 2014.

Alain Menu returns to the BTCC