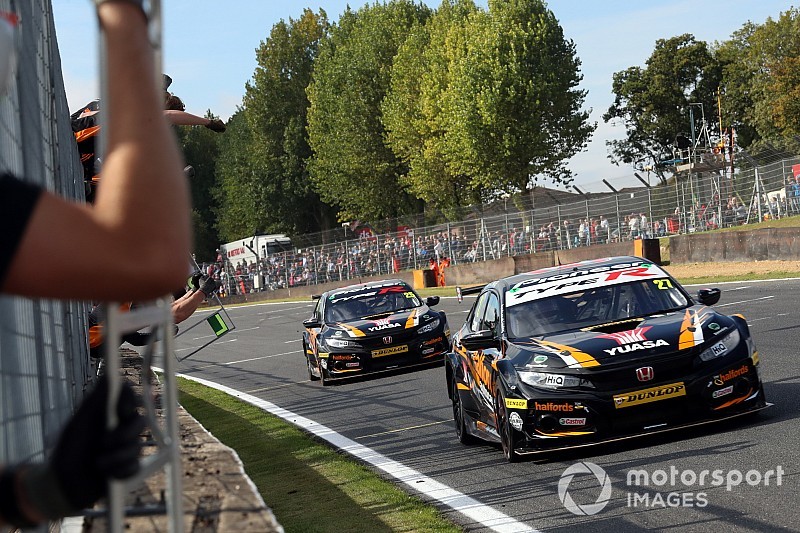 Factory Honda driver Dan Cammish took his maiden BTCC victory in the opening race of the day at Brands Hatch ahead of his Team Dynamics teammate Matt Neal.

The 29-year-old tacked pole man Brett Smith (Eurotech Honda) over the opening lap and sliced inside his rival coming out of Clearways at the end of the tour to grab the initiative. Cammish becomes the 17th different winner of the 28 races so far this season.

Neal had started third but dropped behind Jack Goff (Eurotech Honda) initially, before reasserting himself at Druids on lap four. He set off after Smith and overtook his foe coming out of Paddock Hill Bend at the start of lap nine.

“It has been a great day for is us,” said Cammish. “The car has been fast and it was great that Matt could get up to second as well.

"When he was in my mirrors I suddenly started thinking about the Red Bull situation and Multi 21 [referring to broken team orders from the F1 team’s drivers Sebastian Vettel and Mark Webber in Malaysia 2013].

"But I knew he would be a good wingman and we both had the same tyres and I am thrilled I was able to hold on. This has been a long time coming.”

Goff caught and pressured Smith over the latter part of the race, but Smith held on to take his first podium finish in the category.

Ninth place for Tom Chilton, which was gifted to him when his Motorbase Performance Ford Focus teammates James Cole and Sam Tordoff moved aside on the run to the line, wasn’t enough for him to remain in the title hunt.

It will be a two-way showdown over the last two races between Colin Turkington (WSR BMW) and Tom Ingram (Speedworks Toyota Motorsport).

Turkington, who had started 17th, had been battling with Chilton and the pair touched briefly as they fought over 11th spot on lap 10, but Turkington failed to make the move stick. He came home in 12th place, two places in front of Ingram, who had started 19th.

It means Turkington has extended his points advantage to 36 with two races remaining. There are 44 points left to win.