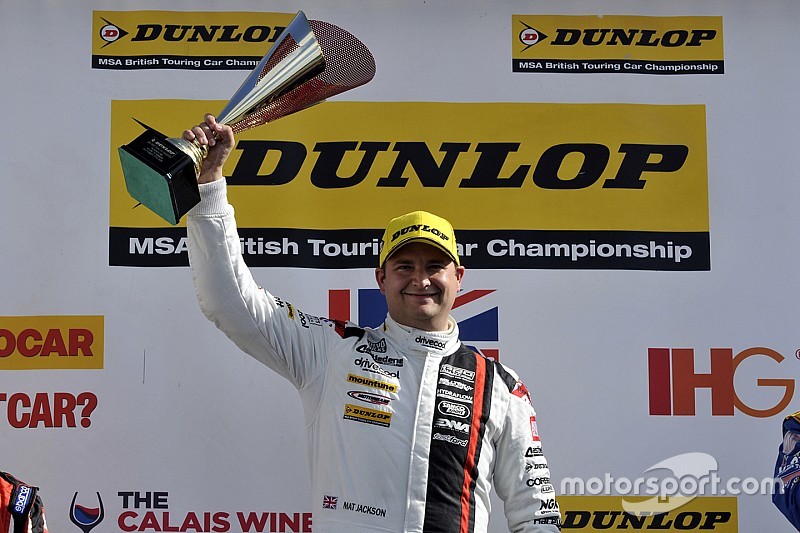 Mat Jackson romped to a second BTCC win of the day at Brands Hatch, as Jason Plato carved into Gordon Shedden's points lead ahead of the title decider.

Starting from pole with the fastest lap in Race 1, Jackson made a lightning start, leading by a full 1.4 seconds from a fast-starting Adam Morgan at the end of the first lap.

The Motorbase Ford man's hard work was nonetheless undone by the Safety Car, as Martin Depper spun at Clearways at the end of the opening lap, collecting Rob Austin in the process.

At the restart, Jackson - carrying soft tyres and maximum success ballast - was unable to shake off Morgan and Tom Ingram, as the top three pulled clear of the rest of the pack.

Ingram, with the luxury of medium tyres no success ballast, was able to force his way by Morgan for second, but couldn't catch Jackson, who reeled off the remaining laps for a fourth win of the season.

Behind Morgan, Dave Newsham held off Jack Goff and Jason Plato in the battle for fourth, the BMR Volkswagen driver scoring 10 valuable points to close the gap in the standings to Gordon Shedden - who limped to 19th place on the soft tyre, failing to score - to 12.

Matt Neal, meanwhile, battled his way through from 13th on the grid to snatch seventh ahead of a fading Aron Smith, who steadily went backwards from his grid slot of second, Andy Priaulx and Rob Collard.

Neal, who is now out of mathematical contention for the title, will start the deciding third race from pole after the reverse grid draw ahead of Plato and Goff.

Turkington, who suffered a puncture on the final lap, is also now unable to win the title, sitting level with Neal 29 points back from Shedden.