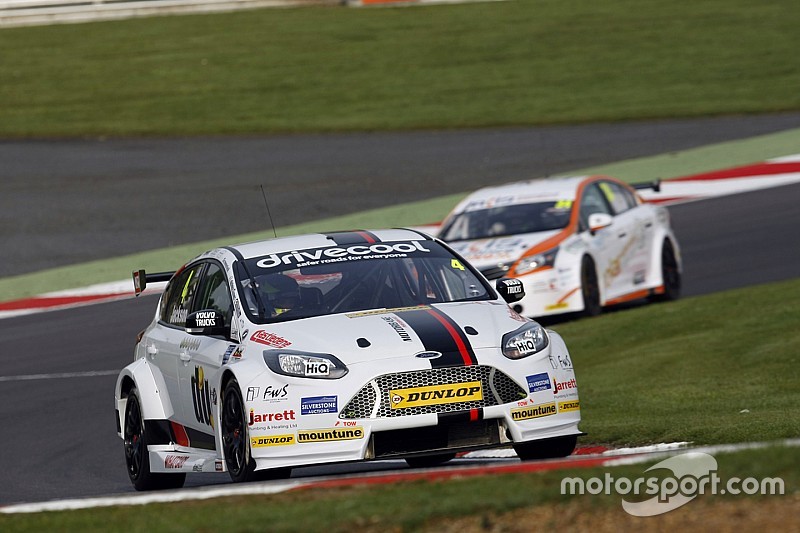 Starting from pole, Jackson was already well in the clear as the pack arrived at Paddock Hill Bend, while Aron Smith was sluggish off the line, challenged by Adam Morgan approaching Druids but holding position.

Behind, Turkington passed the ballast-heavy car of Shedden and Plato, running soft tyres, soon followed suit, nudging the Honda driver out of the way at Surtees.

Carnage further down the pack, with Dave Newsham going off and Alex Martin being turned around with damage, brought out a safety car period that lasted for one lap.

Just a few laps after the restart, Stewart Lines went off in the barriers at Surtees and the safety car appeared yet again.

The second restart once more saw Jackson maintain the lead from Smith, and at the end of the extended 18-lap race, the Motorbase driver took the chequered flag by 0.7s ahead of Smith, his third victory of the season.

Jackson will start race two from pole after securing the fastest lap, albeit this time loaded with the maximum 75kg of success ballast.

Morgan completed the podium ahead of Turkington, Plato, Shedden and Matt Neal, the quartet all remaining in title contention with four races to go.

Andy Priaulx was eighth, ahead of Josh Cook and Rob Collard, who passed teammate Sam Tordoff.

In the points, Shedden's lead over Plato is down to 22 points, with Turkington 29 adrift and Neal trailing by 38. Andrew Jordan, 19th after a pitlane start, is now eliminated from title contention.