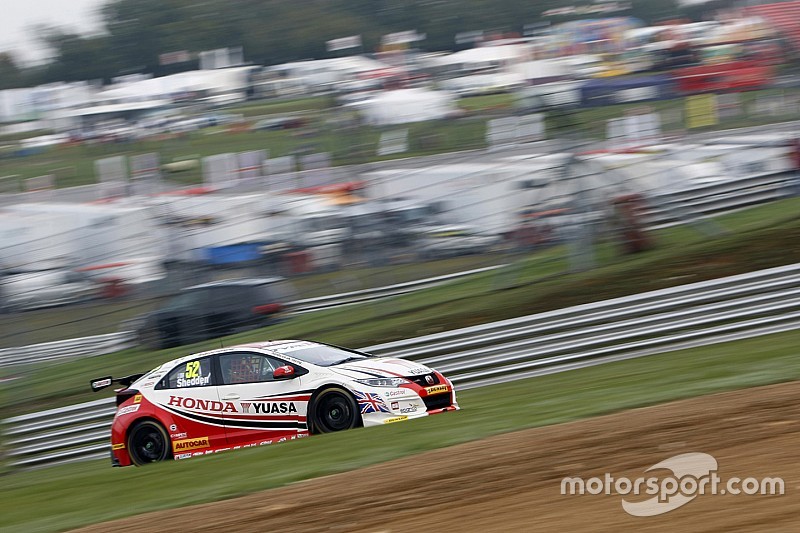 Shedden, running no ballast due to his Race 2 troubles, passed car after car in an action-packed second half of the race to ensure the title with a fourth-place finish, despite Plato's dominant win.

Logic dictated that Shedden's poleman teammate Matt Neal would back Plato up at the start, but those plans would not come to fruition - as Neal ran wide into Paddock Hill Bend and allowed the BMR man through.

An immediate safety car followed as Race 2 standout Tom Ingram was tapped into a spin on approach to Druids and was then collected by fellow spinner Jake Hill.

The race restarted shortly thereafter, only for a Stewart Lines off to cause another stoppage immediately.

And, on the second restart, Neal slowed and was passed by both Jack Goff and Mat Jackson before Paddock Hill Bend, dropping down to fourth - as an off by Dave Newsham stopped the race in its tracks yet again.

Lap nine, marking the halfway point, was the first lap of the race spent entirely under green flag conditions - and saw Shedden move up to 10th.

The next time by, he was already eighth, demoting Andrew Jordan and Andy Priaulx - and a superb pass over Plato's teammate Aron Smith on the main straight moved him up to seventh and just one point adrift of Plato, who had then been on course for the bonus point on the fastest lap.

At the end of lap 12, Shedden lined up Collard and was up to sixth place, just one spot short of the fifth-place finish he needed to secure the championship.

Out front, Neal muscled Jackson and then Goff to briefly reclaim second place, only for Jackson to then sneak past the duo.

With four laps to go, Shedden broke into the top five at the expense of Mercedes driver Adam Morgan and, on the penultimate lap, Neal slowed, allowing both Goff and Shedden through.

The MG driver then withstood massive pressure from Shedden but held firm, completing the podium behind Plato and Jackson.

Fourth place ahead of Neal ensured Shedden took the crown by four points, as Sam Tordoff took the fastest lap away from Plato.

Morgan was sixth, ahead of Collard, Jordan, Smith and Priaulx.