Ash Sutton proved his British Touring Car Championship title-winning credentials in emphatic fashion with a commanding victory in the final race of the season at Brands Hatch.

Sutton was drawn fourth on the reversed grid, but a slow start from Rory Butcher aided the progress of the Laser Tools Racing Infiniti Q50 into third position off the line, and then Sutton got a good exit from Westfield to pass Tom Chilton for second at Dingle Dell.

Out front was poleman Stephen Jelley, but Sutton immediately slashed the gap to the West Surrey Racing-run BMW 330i M Sport, with Dan Rowbottom in pursuit after passing Chilton.

Sutton got a good run through Clearways at the end of the third lap and, aided by a push from Rowbottom, was able to easily clear Jelley by the time he reached Paddock Hill Bend.

A forceful Rowbottom got his Team Dynamics Honda Civic Type R around the outside of Jelley at Druids, and claimed second place on the inside line at Graham Hill Bend, as Jelley was flicked wide onto the grass.

By the end of that fourth lap, Sutton was one second in front, but Rowbottom trimmed the gap on the next lap before the safety car emerged thanks to Jack Mitchell crashing at Hawthorn.

Sutton aced the restart, and within three laps was over a second ahead of the Honda of Rowbottom. He extended the gap to 3.378s with a lap remaining before backing off to cross the line 1.369s in front.

"We were laughing – it's the first race I've done that hasn't mattered in my touring car career, and the pressure was off," said Sutton, whose previous two title wins came in the final race.

"Stephen was always going to be tough, but I got a sweet cutback out of the last corner and a push from Dan helped."

Rowbottom came under pressure in the late stages from a surging Tom Ingram, who had rocketed his Excelr8 Motorsport Hyundai i30 N up from 12th on the grid, but the calm Honda ace had enough in hand to keep his pursuer at arm's length. 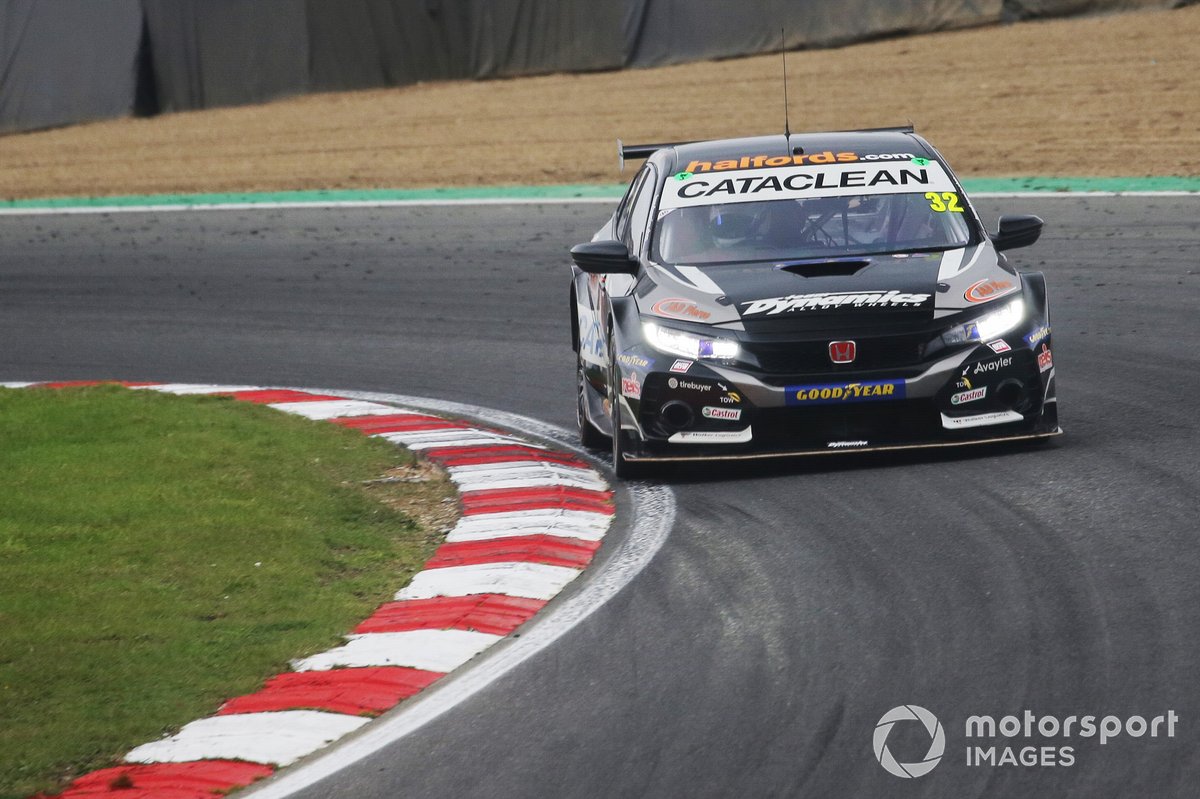 Another charger was Jake Hill, who forced his way up from 10th on the grid to claim fourth in his Motorbase-run MB Motorsport Ford Focus, via contact at Surtees with Jelley when the Ford went up the inside but the BMW closed the door.

As Jelley wobbled off course to the back of the field, Hill got stuck into a ferocious scrap and sliced ahead of Josh Cook's BTC Racing Honda and Chilton's Ciceley Motorsport BMW in one move after Cook had gone up the inside of Chilton at Stirling's.

Hill set fastest lap, but was too far behind Ingram to catch the Hyundai and had to settle for fourth.

Cook completed an excellent weekend and finished fifth, completing a come-from-behind day to grab third place in the championship from under the noses of Ingram (who ended up fourth) and Hill (fifth).

That sent the Northern Irishman off track, and a nasty rut ripped out the right-rear suspension, putting him out of the race.