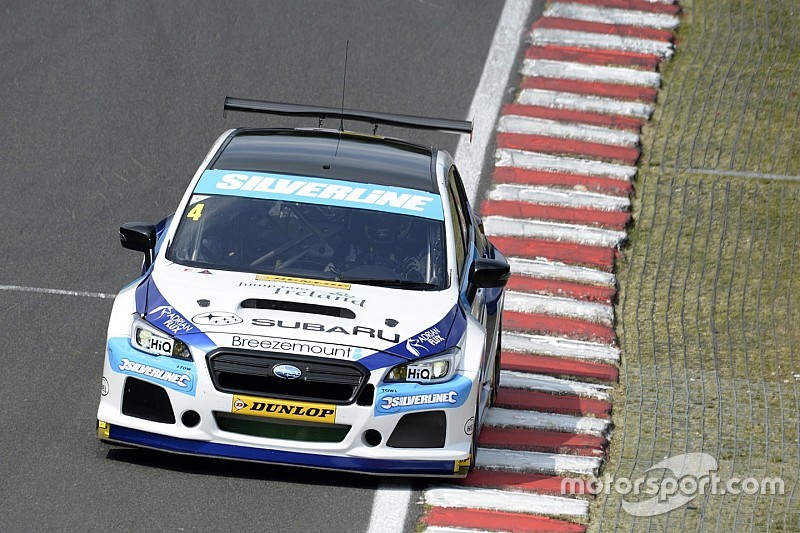 Subaru driver Colin Turkington took a dominant lights-to-flag win in the first race of the final BTCC weekend at Brands Hatch, closing to within 20 points of the series lead with two races to go.

Poleman Turkington made the best start and held off a strong challenge from Handy Motorsport's Austin on the first lap, and following a brief safety car period on the second lap he stretched his legs to win by just under five seconds.

Austin held off race-long pressure from Team BMR's Plato and the fast-closing Triple Eight MG of Cook, with Cook sneaking up the inside of Plato into Clearways on the final tour.

Of the other title contenders, Team Dynamics' Gordon Shedden held onto fifth ahead of Ciceley Racing's Adam Morgan to close the gap to West Surrey Racing's Sam Tordoff to six points.

Shedden's team-mate Matt Neal was seventh and is now 10 points behind. Aiden Moffat and Ashley Sutton were next up, with series leader Tordoff taking his ballast-laden BMW to 10th.

With Plato down in fourth, he is officially out of the title running.

The final contender, Andrew Jordan, was eliminated in the incident which brought out the safety car. Neal and Hunter Abbott made contact into Druids, causing Abbott to spin, and he was collected by the Ford Focus ST of Jordan, who had nowhere to go.

Jordan is now 37 points adrift with a maximum of 44 left to play for.

Abbott also retired his crabbing Chevrolet Cruze, with a good qualifying performance again coming to nothing.

Elsewhere, there were punctures for Team BKR's Aron Smith and Mark Howard, with Speedworks Motorsport's Tom Ingram charging through to 14th from the back of the grid.