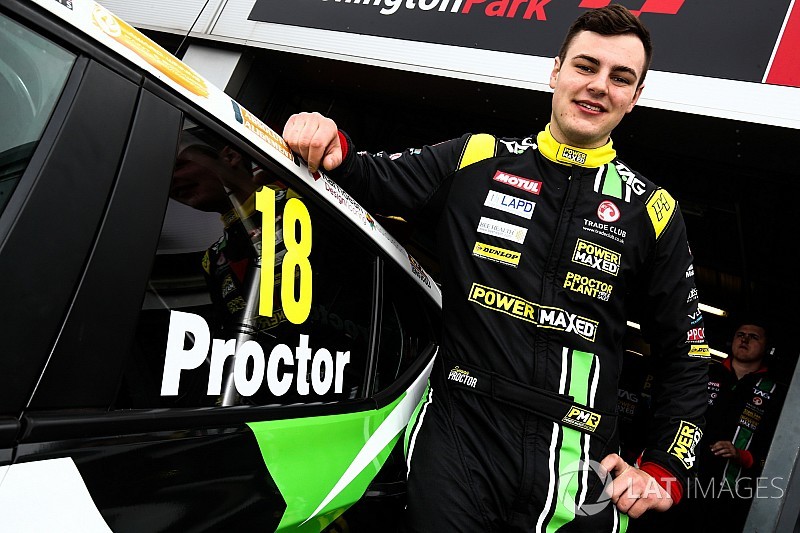 Senna Proctor took Vauxhall’s first victory in the BTCC since 2012 in a dramatic second race of the weekend at Brands Hatch.

The 19-year-old started on the 14th row of the grid after contact in the opening race of the weekend but bolted slick tyres onto his Power Maxed Racing car on a drying circuit.

The frontrunners had all chosen the wet weather tyres but they were reeled in on a drying circuit by several others who had all chosen to gamble on the dry weather covers.

But, by lap 19, the wet tyre runners began to struggle. Proctor, who was battling with the similarly slick-shod Mercedes of Aiden Moffat, had moved into the top 10.

Within two laps the pair jumped the leaders to assume command. Moffat grabbed the advantage from Proctor as they made their way to the front, with the slick-tyred Jake Hill (Team Hard VW) and Ollie Jackson (AmD Tuning Audi) in their wheeltracks.

The crunch point came on lap 26 when Proctor and Moffat went side-by-side on the exit of Druids. The pair made slight contact and the Mercedes went into the wall.

“It is a dream come true and I am not really sure that I won’t wake up soon,” said Proctor. “I saw that there were some dry patches on the track on my out lap to the grid, and I said to my engineer that we should try slicks. From 27th on the grid, I figured we had nothing to lose – and I was proved right.

“This truly is an amazing result.”

Proctor continued untroubled to victory from Hill and Jackson. Behind them. Tom Boardman (AmD Tuning MG) took fifth from Rob Austin (HMS Racing Alfa Romeo), who was also on slicks after starting in 29th spot. Austin has been drawn on pole for the reversed grid race later on this afternoon.