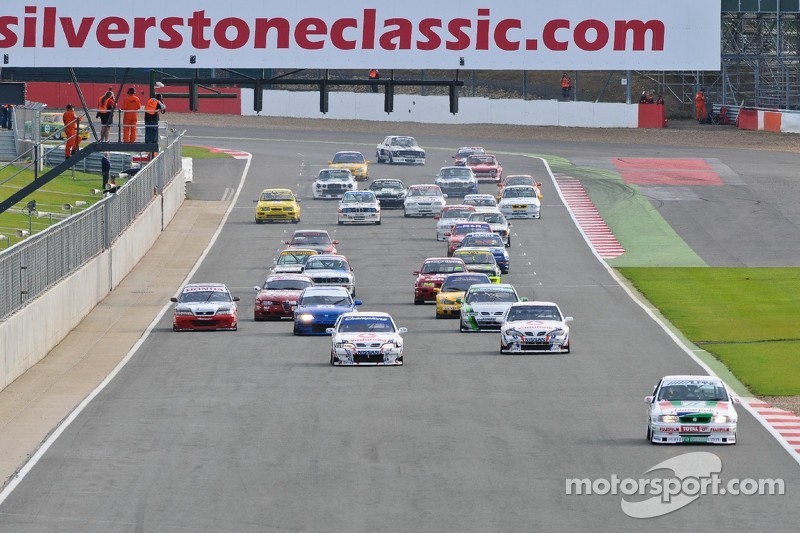 Vintage in modern era celebrates the past with the present at the Brands Hatch circuit. Patrick Watts and John Cleland are both looking forward to the weekend and getting behind the wheel of the historic cars.

For any British Touring Car fan missing their BTCC fix during the summer break, they need not look any further than Brands Hatch as the newly former HSCC Super Touring Car series heads to the Kent circuit this weekend for its second meeting of the year.

Following the huge success of the Fujifilm Touring Car Trophy held during the Silverstone Classic last year, the decision was made to turn it into a 4 race weekend championship that allows cars from the great past of the BTCC and other Touring Car Championships from around the world to enter.

Cars from as early as 1970, that have had history of racing in Touring Car Championships, are allowed to enter; although there is no doubt that the cars of most interest will be the incredible Super Touring Cars from the mid 1990’s, that raced up to 2000 used during the glory years of the BTCC. Most of the cars racing are still present in their original livery making them easily identifiable to the superstar driver that used to race them.

I think everybody will say we are going to take it easy and these are historic cars.

After a fairly low key start to the championship held at Thruxton over a bitterly cold Easter weekend, the series will now return bigger and better to Brands Hatch. Leading Super Touring Car entries from Thruxton included a pair of Nissan Primeras, the first being a 1998 car used by Matt Neal and the second being Laurent Aiello’s Championship winning car from 1999, while both races were won by Stewart Whyte using an ex David Leslie Honda Accord from 1996.

Along with the Super Touring Cars also on the grid at Thruxton was a Ford Mustang, a few Ford Sierra RS500’s while in the invitational class there was an ex Steve Soper DTM BMW and a pair of more recent S2000 Alfa Romeo’s used by two former double BTCC Champions; James Thompson and Fabrizio Giovanardi from the European Touring Car Championship.

At Brands Hatch we are expecting even more Super Touring Cars with an incredible 11 currently on the entry list. Included in the entry list are another 3 Nissan Primeras, a pair of which used to be driven by the late Leslie who tragically lost his life in a helicopter crash back in back in 2008. One car is from 1997 and the other from the ‘99 season in which he finished series runner up.

Also on the entry list is another Honda Accord from 1997, previously driven by Gabrielle Tarquini, and one of the all-conquering Ford Mondeos from 2000, which took a 1, 2, and 3 in the championship. The final Super Touring Car on the grid doesn’t formally belong to the British series, with one of the drivers who previously drove one of the S2000 Spec Alfa Romeo 156’s having recently acquired an ex Stefano Modena Italian Super Touring 156 from 1998 and will race it for the first time this weekend. This will be a particularly rare treat for British fans as this type of car has only previously raced on British shores 2 or 3 times before.

There is no doubt about the star attractions this weekend with former BTCC legends Patrick Watts and double BTCC Champion John Cleland, both having purchased former Super Touring cars, back behind the wheel of them this weekend while another former champion, Tim Harvey, will also be on the grid driving one of his previously driven cars as well.

Watts raced in the series, first for Mazda before switching to Peugeot between 1992 and 1997. Watts never actually won a BTCC race, with a best finish of 2nd at Snetterton in 1995, but was well known for his hard racing in an underperforming car.

The car Watts will use is a 1998 Peugeot 406 used by Paul Raddisch with Watts having already departed the team and the BTCC, but he did later race and win in the car during a short spell in the Australian Touring Car Championship in 1999.

Like Watts, Peugeot never actually won a race in the BTCC, despite Watts knowing how good the car was admitting that there were always politics behind the team and said, “I had a few podiums with the 94 car, which was French built, but the team just went downhill every single year, with the budget getting less and less, whilst everyone’s got more. We would arrive at the first race totally untested; everybody else would arrive with suntans, having tested in Africa or somewhere like that through the winter!”

“It was run out of the factory, then it went to MSD in my last year but there was something fundamentally wrong with the running of the team. The car is very good- I took the same car to Australia and beat the works Volvo’s being driven by Jim Richards in the same car that Rickard Rydell took the 1998 championship in and the Peugeot was quicker- when the right people were looking after it, so I’ve got every faith in the Peugeot product.”

Speaking about the new championship Watts said, “I think everybody will say we are going to take it easy and these are historic cars , so we are going to look after the tyres and the wing mirrors, however I think when the flag drops all that will stop and we will be out there to do as well we can. There are some good drivers out there with exiting cars and they are used to driving them- I haven’t driven the car for 12 years, haven’t even started the thing up yet!”

Finally when asked if he could take his and Peugeots first win in the UK, Watts, who has recently brought the car back from Australia, said, “That is the plan-first and second and third win will be very nice! As long as the car goes well, I have fun, a good race and it promotes the series, I think it will get better and better.”

In contrast to Watts, Cleland has 17 BTCC wins to his name and remained loyal to Vauxhall racing for his entire BTCC career between 1989 and 1999. The Scottish legend was perhaps the biggest name and one of the leading figures during the heyday of the series taking two BTCC titles along the way. His first was at the wheel of a class C Astra in 1989, when the series was split into a multiclass championship, before taking the title in 1995 at the wheel of a Vauxhall Cavalier following the birth of the single 2-litre format in 1991, during which time he finished no lower than 4th in the championship between 91 and his title winning year in 95.

The car Cleland will race is his Vauxhall Vectra from 1997, which was the first ever BTCC car built by Triple Eight Racing (the men behind the current MG KX Momentum Racing programme). The car first raced midway through the 1997 season at Knockhill but struggled taking just 3 points scoring finishes, all in its first 3 races with a best position of 6th at Knockhill. During its 12 races the car was floored by a major aerodynamic problem, which couldn’t be corrected after inheriting the aero package from Germany due to Triple 8 having not taking over the team until late pre-season missing the 1997 FIA Homologation deadline.

The car was then raced in the 1997 AMP Bathurst 1000 race by Cleland, and current BTCC racer James Kaye, before racing later in both the Swedish and Norwegian Touring Car Championships. The car was then purchased in 2005 by Alex Schooledge, who has restored the car to 1998 spec and in the colours that Cleland and former F1 racer and co-founder of Triple 8 Racing Derek Warwick used in the 1998 AMP Bathurst 1000 race. Schooledge has raced the car in a selected number of events since purchasing it in 2005, with the newly restored Vectra first appearing in its current state at last year’s Silverstone Classic event.

Cleland admitted that he had hoped to purchase his 1995 winning Cavalier but, with the current owner unwilling to sell him his old car, said he was delighted to have secured a proper Super Touring Car of his and was full of praise for Schooledge and the work done by his team, “His preparation company Outpace has restored it in Bathurst colours and he’s done an excellent job. It’s original right down to the seat. This is proper Super Touring era – I’m going to get in touch with my old engineer to pick his brains and see if he still has any set-up sheets.”

Cleland finished off by saying that he hopes to turn it into a family affair and has high hopes for the series by saying, “I hope the series gets bigger and turns into a major event in future years… I’m sure it will. My plan is to race it and involve my sons Niki and Jamie in some of the drives. It should be a bit of fun!! Good job I didn’t throw out the overalls from that year!”

The final BTCC legend on the grid will be former BTCC Champion, and current ITV BTCC commentator, Tim Harvey. Like Cleland, Harvey was one of the leading figures during the early Super Touring Car years and took the 1992 championship after a final race shoot out with Cleland at Silverstone. This turned out to be one of the most iconic and controversial races in the series history, after Cleland was eliminated after colliding with Harvey’s BMW Listerine team mate Soper.

After winning the championship, Harvey was also a works driver with Renault, Volvo and was also Watts’ Peugeot team mate for a couple of years. He also returned to the series post Super Touring years with a part season in an Independent Alfa in 2001 and a full season in 2002 driving in a non-works Peugeot team whilst he also became a double Porsche Carrera Cup Champion since his BTCC days.

Unlike the other BTCC legends, Harvey will not be driving a Super Touring Car but instead will be at the wheel of a stunning Labbats liveried Ford RS500 that he drove in the late 1980’s.

Harvey very much has the BTCC in his blood and is full of praise for the new championship and said, “Touring car racing has been in my blood since 1987, so I’ve seen every gestation of car since that period, and of course I used to follow it before then when I was growing up. So, it’s something I’m very passionate about. Anything that gets the cars back out racing is fantastic news and the resurgence of interest in classic touring cars is great.

Motorsport.com will also be present this weekend to see how the BTCC legends do alongside the rest of the field with images and reports from the day following the weekend’s pair of races.

Rolling back the BTCC years at Brands Hatch