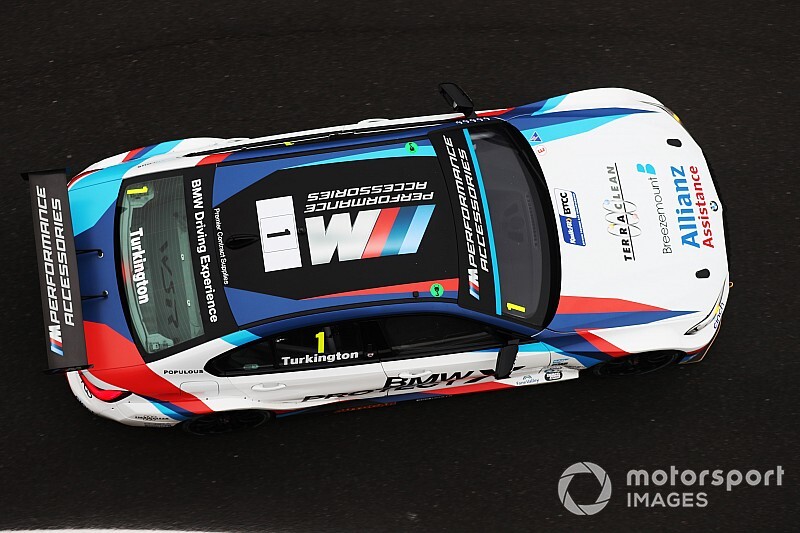 Colin Turkington moved a step closer to the 2019 British Touring Car Championship title with pole at Brands Hatch as title rival Andrew Jordan crashed out of the session.

The defending champion posted a 1m40.752s lap in the rain-hit session, which was dominated by rear-wheel-drive runners, to end up 0.316s clear of Ash Sutton.

As the weather deteriorated after practice, the entire 30-minute qualifying shootout was run on wet tyres, with Matt Simpson losing control on the out-lap and taking to the grass at Surtees.

Turkington was the first competitor to set a representative flying lap, posting a 1m41.681s ahead of his WSR teammates Tom Oliphant and Jordan.

BMW 330i M Sport driver Turkington then found a further 0.6s on his next flier to pull 1.182s clear of then closest rival Matt Neal in the Honda Civic Type R.

But Sutton, known for his prowess in the wet, halved that margin with his next effort but again Turkington responded emphatically to carve out another 0.9s from his previous lap to set his eventual pole time.

The 2013 champion braked too late on the Grand Prix layout and careered across the gravel and into the tyre wall at Hawthorns.

For causing the stoppage, he was unable to take part in the remaining five minutes of the session and had his second lap time erased.

However, his next quickest effort was good enough for third behind Sutton – with no drivers gaining in the final part of qualifying.

Turkington chose to sit out the final 90 seconds, but duly scored his 20th BTCC pole position and bagged a bonus point, as his teammate Tom Oliphant was fourth fastest.

Rory Butcher was the top front-wheel-drive competitor in fifth, some 0.885 off the pace.

Jake Hill, who spun early on at Surtees, was sixth ahead of Chris Smiley and his BTC Racing stablemate and outside title contender Josh Cook.

Mike Bushell and Infiniti Q50 driver Aidan Moffat rounded out the top 10 ahead of Adam Morgan.

He was 12th at the red flag and then had two huge slides on his out-lap as the session resumed.

For his flying lap he got stuck behind Jason Plato and then lost the rear into Hawthorns and skidded across the grass – in turn taking the pressure off Turkington for race one – as he failed to improve.