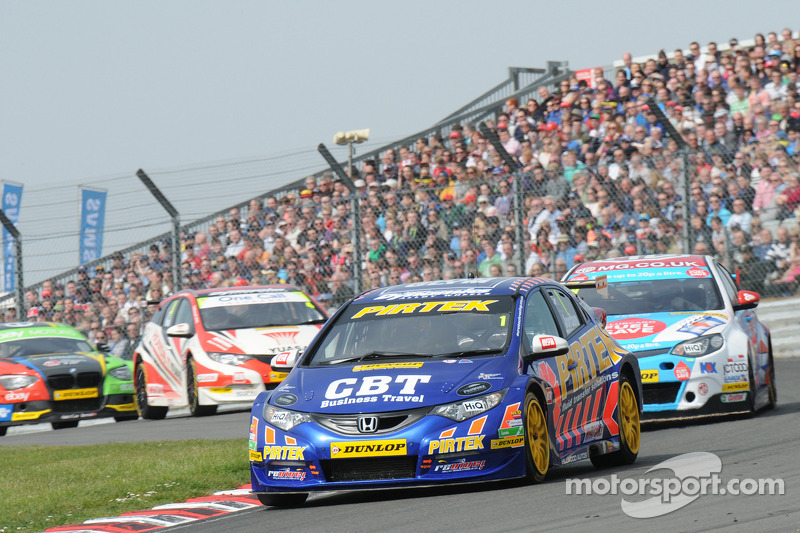 The opening rounds of the BTCC season have already produced five different winners from just six races, highlighting the ultra competitiveness of the 2014 field.

The Dunlop MSA British Touring Car Championship is set to thrill an expectant Bank Holiday crowd at Thruxton next weekend (3/4 May) as Britain’s top motor sport series makes its annual visit to Hampshire.

Billed as one of the most highly anticipated seasons in the series’ illustrious history after announcing a huge 31-car grid – including seven former champions ­– the BTCC has already made an impact in 2014 after events at Brands Hatch and Donington Park.

The Hampshire speed bowl of Thruxton poses an altogether different challenge, however, as it’s the fastest and most daunting circuit on the BTCC calendar.

Wheel-to-wheel racing at more than 140mph is not for the feint hearted, which is just one of the reasons why the event attracts so many fans from across the county and indeed country. The high speed flat-out nature of the circuit highlights the thrills and spills of top-level touring car racing in all its glory, where bumping and grinding is all part of the action.

With a triple-header of BTCC contests and a whole host of support races on this blockbuster bill of British motor sport, it’s little wonder that the event is renowned as one of the biggest on the Hampshire sporting calendar. 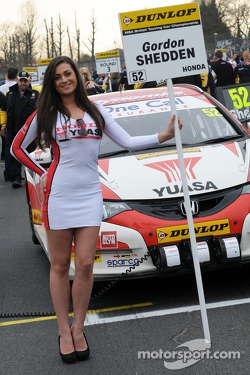 Story so far: It’s tied at the top!


The opening rounds of the BTCC season have already produced five different winners from just six races, highlighting the ultra competitiveness of the 2014 field.

Four of the seven former champions on the grid have stood on the top step of the podium so far, as has MG KX Clubcard Fuel Save young gun Sam Tordoff, who won at Donington Park on his 25th birthday weekend.

The pre-season favourites are at the sharp end of the standings with battle lines beginning to take shape. Reigning champion Andrew Jordan and MG’s Jason Plato are tied at the top having both enjoyed one stellar weekend apiece. The Honda Civic of Jordan took pole position and two race victories at Brands Hatch, whilst Plato just fell short of repeating the feat at Donington with a pole, a win and a second place finish.

The top two are just a point ahead of 2012 champion Gordon Shedden, who produced a heart stopping final corner move on the BMW of Colin Turkington last time out at Donington. It was a moment that will go down in BTCC folklore as both cars slid off the track and into gravel before the Scotsman hauled his Honda Civic Tourer back on to the tarmac just ahead of the Ulsterman to take the win. The result also made history as it was the first time an ‘estate’ style car won a BTCC race.

Shedden’s team-mate Matt Neal has been the model of consistency and is also in the title picture, just a few points behind fourth placed Turkington.


Double champions Alain Menu and Fabrizio Giovanardi have both made a comeback to the Dunlop MSA British Touring Car Championship for 2014 after some time away racing on the continent.

There are many reasons why the duo wanted to return to the hustle and bustle of Britain’s tin-top spectacular, with the chance to take on Thruxton again listed as one of their ultimate challenges.

Menu scored a hat-trick of wins at the Hampshire circuit during the much loved Super Touring-era in the mid-to-late Nineties, and the Swiss superstar will be contesting his first race at the venue since 2007.

“Thruxton is a circuit that demands respect,” said Alain. “It is a track I really like ­– it’s very fast and a unique challenge. I used to love racing there and I’m really looking forward to going back.”

Giovanardi has an even better record around the fearsome ribbon of tarmac, having scored seven victories there, including an incredible four wins on his way to securing his maiden BTCC title back in 2007. The Italian is also looking forward to revisiting Thruxton, saying, “I love the high speed that makes the difference between the fast and slow driver. The fast corners give you adrenaline and make a big challenge for the driver, and when you do make a mistake the risks are big!”

Only time will tell if these two returning legends will be able to challenge at the top of the order on a consistent basis, but with ten wins between them at the UK’s fastest circuit you wouldn’t bet against either one of them from spraying champagne again at Thruxton.

Local heroes: Collard closing in on first podium of 2014


Eversley-based Rob Collard has stood out as the ‘best of the rest’ so far this season, finishing inside the top seven in five of the opening six races. His biggest disappointment came when he spun out of third place in treacherous conditions at Donington Park earlier this month.

That podium would have put the eBay Motors BMW driver well inside the top six in the championship standings, but for now he’s just one point behind race winner Tordoff down in seventh.

Collard has won seven BTCC races in his career to date but he’s never been able to make it happen at his local circuit. If he is to remain in the early title picture then he’ll need his luck to change around the 2.36 miles of asphalt next weekend.

Team-mate Nick Foster will also be racing at his home venue having made a steady start to the season, with a fifth place at Brands Hatch being his standout result so far.

There has been no such front-running form for Fleet-based Daniel Welch, however, as his STP Racing with Sopp + Sopp team deserves huge credit for simply making the grid. The squad decided to implement some comprehensive changes to its pair of Protons ahead of the 2014 season and this led to Welch missing the first event altogether. He made it out at the last moment for Donington Park and while the car was someway off the pace initially, Welch and the team made incredible progress as the weekend wore on to eventually hauled themselves towards the chasing pack.

The outfit will probably see the Thruxton weekend as another test session as it continues its ongoing development of the car but don’t be surprised if Welch and his team-mate Ollie Jackson is challenging for points.