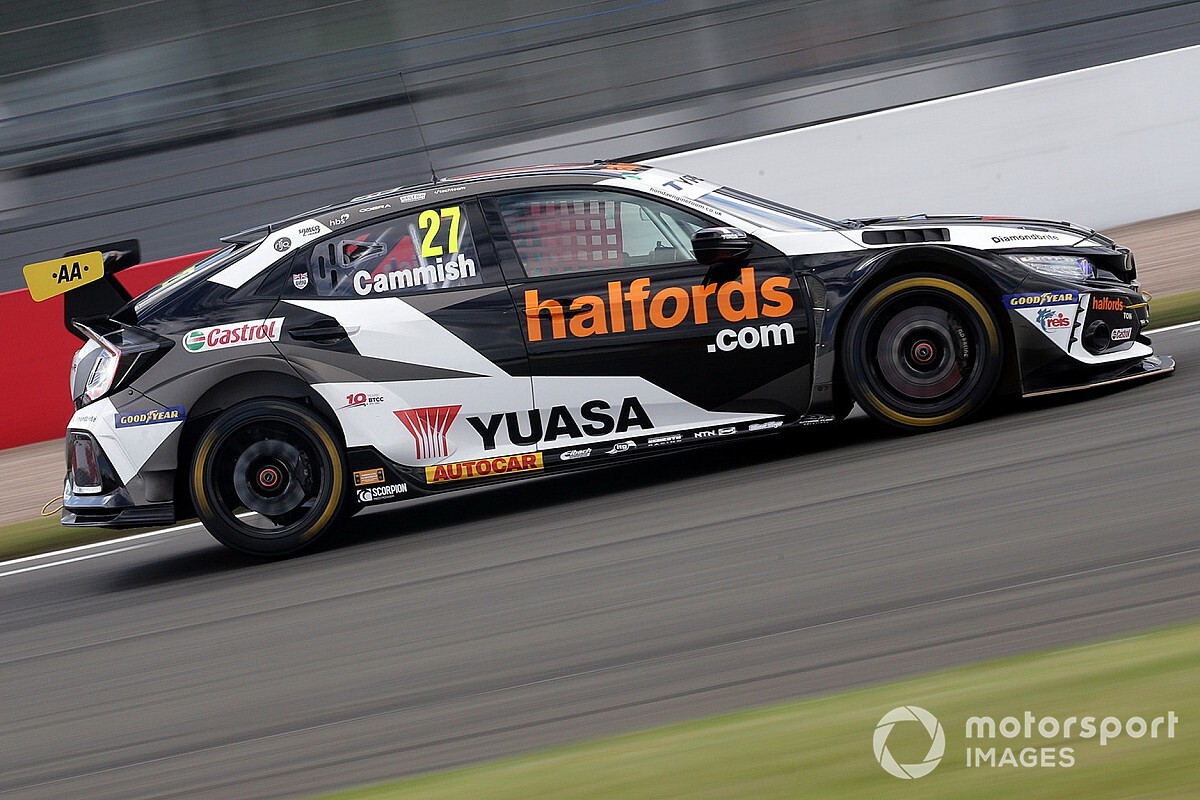 Honda’s Dan Cammish took a dramatic win in the first race of the BTCC round at Brands Hatch after a late puncture hit long-time leader Rory Butcher.

Butcher had led through the first 12 of the originally scheduled 15 laps, the new Ford Focus ST of local team Motorbase Performance looking capable of defending all the way from Cammish.

Cammish would occasionally bring the Team Dynamics-run Honda onto the rear bumper of Butcher before dropping away again, and this enabled BMW’s championship leader Colin Turkington to make it a three-way fight at the front that was more socially distanced than frenetic.

Butcher had a 0.682s advantage over Cammish when the safety car appeared, thanks to Cammish’s Honda teammate Matt Neal hitting the barriers on the outside of Hawthorns after a collision as he tried to prise 17th position away from Aiden Moffat.

The interlude set up a three-lap dash to the finish, but the cars had hardly got going again before Cammish was diving up the inside of Butcher into Druids, with plumes of smoke from the left-front of the Ford indicating the drama that had hit the Scot, who also went off in Saturday’s FP1 session with a left-front puncture.

This gave Cammish, carrying 54kg of success ballast on his Honda, his second win of the season over Turkington, who was lugging the full 60kg on his West Surrey Racing-run BMW.

While there was heartbreak for Motorbase with the fate of Butcher, there was joy too as Ollie Jackson brought his unballasted Focus through to third.

Jackson survived a brush with Cammish off the grid, which forced him to brush the inside barrier, to settle into an early fourth ahead of the AmD-run MB Motorsport Honda of Jake Hill and the Speedworks Motorsport-run Toyota of Tom Ingram.

Ingram had just nipped inside Hill to grab fifth before the safety car, and the elderly Honda Civic plummeted down the order after the restart.

Jackson therefore had Ingram, Tom Chilton (BTC Racing Honda) and Ash Sutton – who had hauled his Laser Tools Racing Infiniti through from 14th on the grid – behind him for the final sprint to the flag.

Jackson stayed firm, perhaps helped by Ingram having a charging Chilton to deal with, their duel including a front-to-rear kiss at Graham Hill Bend.

Sutton, who suffered a lack of grip in qualifying, was showing the flipside of that particular coin in the race and had the best race pace of the leading runners immediately before the safety car as he latched onto the battle ahead.

Senna Proctor claimed seventh in his Excelr8 Motorsport Hyundai, while Tom Oliphant hauled the second BMW up to eighth after dropping to 15th on the opening lap when a clash with Josh Cook forced him onto the grass on the run to Westfield.

That incident eventually forced Cook to the pits to have grass cleared from the radiator of his BTC Honda, although not before he had set fastest lap.

Stephen Jelley just lost out to Oliphant on the sprint to the line in his Team Parker Racing BMW, while Hill completed the top 10.