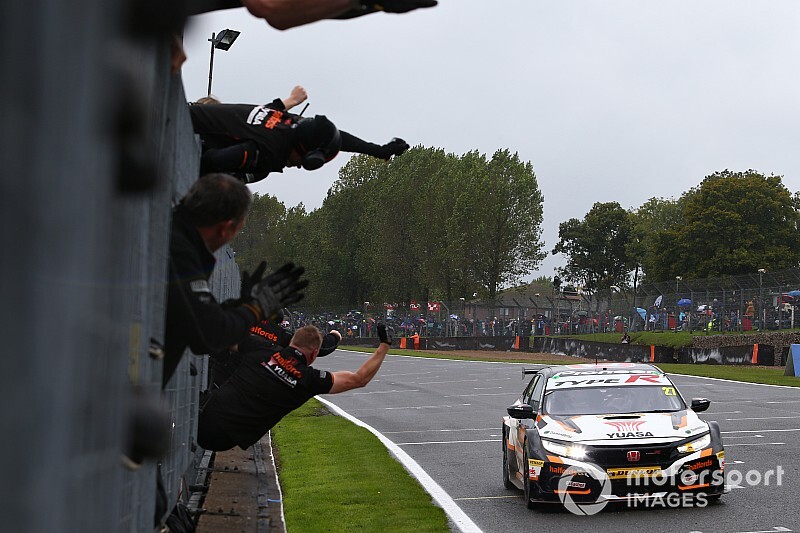 After getting stuck behind Jason Plato in qualifying, Cammish lined up just 12th ahead of Neal on the grid but progressive rain hurt the rear-wheel-drive competitors while Neal’s gamble for wet tyres gifted him a late surge.

A sluggish getaway on the cambered surface meant second-starting Ash Sutton swept around the outside of Turkington into Paddock Hill Bend to take the lead as Andrew Jordan, from third, attempted a similar move.

Turkington fought off his teammate and then was able to keep with Sutton during the race’s early phase.

Although he entered the race with a 17-point lead, Turkington did not sit back and went on the charge to dive his BMW up the inside of Sutton into Druids to regain the lead.

With Sutton’s line onto the back straight compromised as he tried to regain position, Rory Butcher and Jake Hill moved through for second and third place.

The race was then paused for a safety car as Matt Simpson continued his dismal weekend as he cannoned into the tyre wall at the top of Paddock Hill Bend.

During the lengthy delay Neal and Tom Chilton led a gamble to dive into the pits for wet tyres as rain hit.

At the restart Butcher sent his AMD Tuning car down the inside at Surtees to deprive Turkington of the lead as the front-wheel-drive runners began to move forward as grip levels decreased.

Cammish, having bolted to seventh on the opening lap, was another climber and tagged Sutton before passing.

He then latched onto Hill, with the Audi driver suffering a big slide at Graham Hill Bend to gift Cammish second place.

A stunning move around the outside of Paddock Hill Bend on Butcher returned first as a late downpour gave the wet-shod runners a huge boost.

Cammish moved well clear for his second win of the season, while Neal and Chilton made a last-lap pass on Turkington and then Butcher to round out the podium.

Butcher held fourth ahead of the reigning champion, while Mike Bushell headed Stephen Jelley for seventh.

Jordan continued to struggle in the mixed conditions and fell to eighth ahead of Jack Goff and Ollie Jackson.

Update: Cammish has had five seconds added to his race time for overlapping with Tom Oliphant at the safety car line.

He was adjudged to be out of position alongside the BMW of Oliphant in their battle for sixth place.

Having won over Neal by 7.882 seconds, the Team Dynamics driver retains his second BTCC win and closes to within just eight points of championship leader  Turkington ahead of the final two races.

Barry Plowman, the co-owner and technical director of Team Dynamics, told Motorsport.com: “There was nothing that Dan could have done differently.

"It happened just as the cars were getting ready to take the restart."

“Oliphant [in front] went wide at Clearways and was losing the car, so Dan moved right over the track because he was sure that Oliphant was going to go off.

“He got on the brakes, and there was a slight overlap.

“We have seen Oliphant’s onboard [videos] and he was on the [steering] lock-stops."