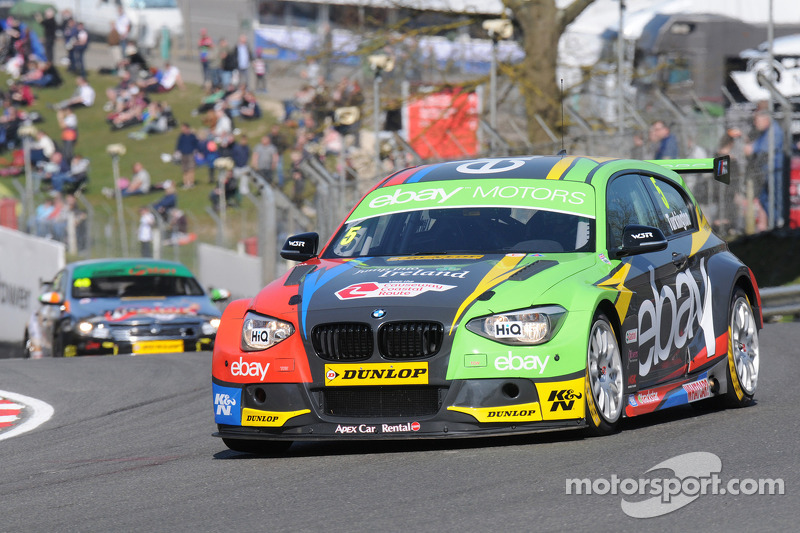 The final race at Thruxton was a wild one and although Colin Turkington emerged victorious, everyone is talking about Simon Belcher who flipped over a tire barrier and into the woods during the event.

Colin Turkington took the win in the final race at Thruxton after surging from fifth to first on the opening lap.

The Ulsterman led home both Airwaves Racing cars of Mat Jackson and Fabrizio Giovanardi, ending an impressive day for the Wrotham-based squad.

The truncated race included two safety car period when two cars went off at the high speed Church Corner in separate incident. The Proton of Ollie Jackson was first to go off into the barrier before Simon Belcher’s Handy Motorsport Toyota spectacularly rolled over the tyre wall after a huge impact.

Both drivers were completely unharmed but it did mean that the final contest of the day failed to find a rhythm. Fortunate then that the rear-wheel eBay Motors BMW of Turkington made up four places off the line before immediately harassing the Focus of Giovanardi. He’s made a move stick before the end of the first tour and he went on to take a relatively comfortable win despite the interruptions.

The two Ford Focuses battled intensely with Team Owner David Bartrum warning his drivers to ‘play nicely’ over the team radio. That’s exactly what the experienced duo did with Giovanardi eventually relinquishing second place to his faster team-mate.

Andrew Jordan kept himself out of trouble to finish fourth and extend his lead in the standings. The reigning champion benefitted from yet more drama with the likes of Gordon Shedden, Matt Neal and Rob Collard all coming to blows.

Despite missing out in the initial battle Shedden would eventually finish fifth when things boiled over between the BMW of Collard and Tourer of Neal. Both cars went off after contact at the first complex with Collard recovering to finish tenth with Neal coming home 23rd after being forced to pit.

Although Jack Goff slipped back from his front row starting berth the Vauxhall Insignia driver still took a credible top six finish ahead of the Mercedes of Adam Morgan and Sam Tordoff’s MG. Tordoff’s team-mate Jason Plato endured a miserable race when first lap contact between Collard and Morgan fired the A-Class into Plato’s side, forcing him to retire in the pits.

Warren Scott was another who failed to finish whilst both United Autosports Toyotas also retired.