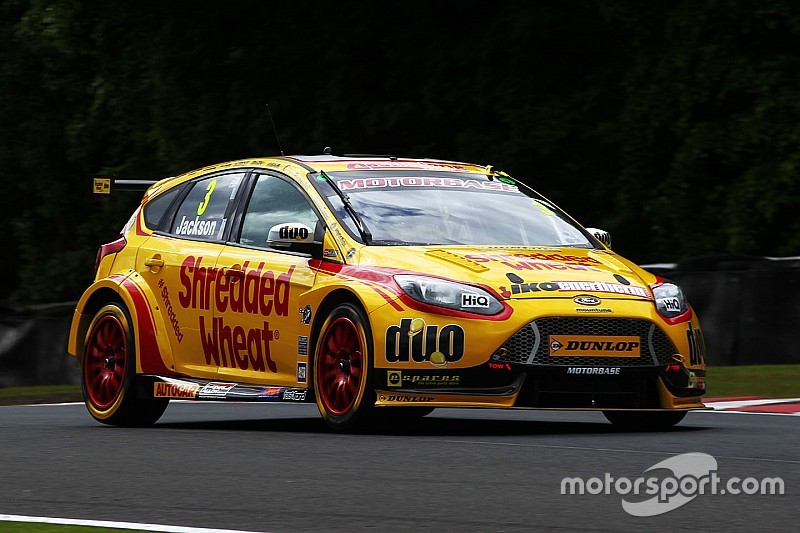 Motorbase Ford Focus driver Mat Jackson has taken his first BTCC victory of the season at Croft when he narrowly fended off the Subaru of Ash Sutton to claim the spoils in the third race of the weekend.

Jackson started on the front row alongside AmD Tuning Audi driver Ollie Jackson and tapped the back of his rival going into Sunny In on lap three.

That gave the Ford man a big advantage from second-placed Rob Austin (Handy Motorsport Toyota) as he held off a queue of rivals behind.

Sutton, after a fight with his teammate Plato which was resolved when he lunged for the inside at the hairpin at the end of six laps, quickly worked his way onto Austin’s tail.

Sutton powered ahead as the cars began lap nine and slashed Jackson’s four-second advantage to nothing as the pair started the final lap. Despite running side-by-side out of the final corner, Jackson held on.

“That was a tough race,” said Jackson. “I could see Austin in second place and I took things steady, I wanted to save the car for later on in the race. Then I saw one of those rear-wheel-drive cars in my mirror and I knew I was in for a fight.

“Sutton went for it around the outside, and I wasn’t going to let him have it.”

Sutton was delighted with second place: “I was held up a bit getting past Jason, because I knew it had to be a good move, but I could see the leaders getting away.

"And on the last lap – what racing driver wouldn’t try something? I had to, but Mat ran me out of road. That’s how it goes.”

Behind Sutton, Plato worked hard to unseat Austin from third place and managed it as the cars powered out of the final corner, sealing the place by 0.04s.

Matt Neal in the Team Dynamics Honda climbed from 18th on the grid to seal fifth position with a stirring drive, and he headed Colin Turkington (WSR BMW) and Andrew Jordan (WSR BMW).

Rob Collard had been shuffled down the pack after running in fifth initially as Neal powered through, and he returned to the track for eighth place. Gordon Shedden (Team Dynamics Honda) and Ollie Jackson rounded out the top 10.