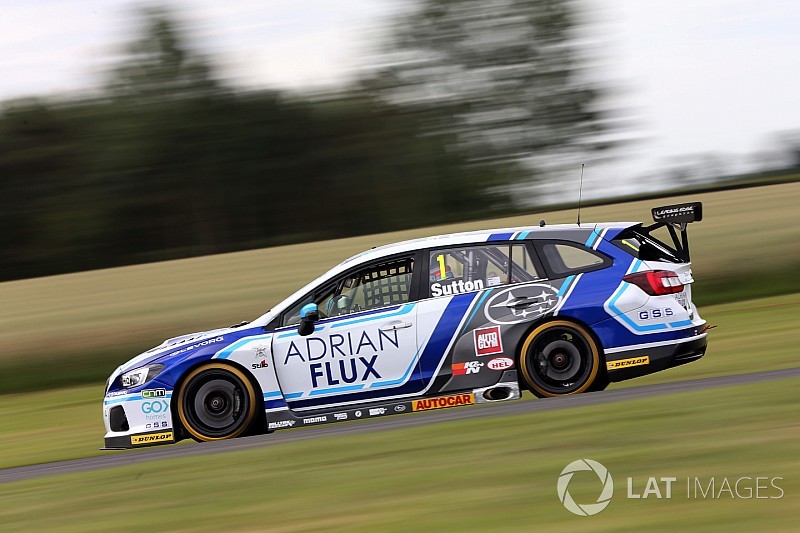 Ashley Sutton followed up his pole position on Saturday with victory in the opening BTCC race of the weekend at Croft, leading a Subaru 1-2 for his first win of the year.

Sutton was able to hold the lead when the lights went out at the start of the race but the fast-starting BMW of Andrew Jordan was able to slot into second on the run to Clervaux – with a clash behind between Stephen Jelley and Rob Austin leading to the Safety Car being deployed.

Racing resumed on lap four with Sutton immediately opening up a gap of nearly a second over Jordan behind, with the WSR man then coming under increasing pressure from Jason Plato in the second of the Subarus.

Plato would eventually make his move at the end of the tenth lap, holding a tighter line coming out of the final corner to draw alongside Jordan on the start/finish straight.

Although Jordan could defend into turn one, Plato was able to put his nose up the inside through Hawthorn and made the move stick into the Chicane to go second.

Once through, Plato set about chasing down his BMR teammate ahead but despite closing to within a second of the lead, he had to settle for second spot as Sutton picked up the first victory of his title defence.

It was also the first win since the team switched to Swindon-prepared engines at the start of the year.

“I didn’t think we’d be in this position a few weeks at Oulton Park,” he said. “Running the hard tyre made life a bit harder but the gamble paid off. I knew the old boy was coming for me towards the end but I had a bit left in the tank when I needed it.

Having slipped down to third spot, Jordan would drop away from the leading pair and found himself forced to defend from Tom Ingram, who was enjoying a strong run as best of the front-wheel drive cars in his Toyota.

Ingram had a look at the hairpin at the end of lap 13 but was then gifted the place at the start of the next lap when Jordan ran wide into the gravel at turn one and plummeted down the order.

That left Ingram free to round out the podium as the best of the front-wheel drive runners, with Sam Tordoff edging out Colin Turkington in the battle for fourth place.

Tordoff had been dicing with Ingram early on but ultimately found himself forced to defend from the BMW behind in the closing laps, with the pair split by just a tenth of a second as they crossed the line.

Rob Collard rounded out the top six in the second of the WSR-run BMWs having run nose-to-tail with Turkington throughout the race with Josh Cook and Dan Lloyd rounding out the top eight – the latter with his best result since returning to the series at Oulton Park with the BTC Norlin squad.

Jordan’s moment at turn one would ultimately result in him crossing the line down in tenth spot, just behind Matt Neal’s Honda which came through from 15th on the grid after his qualifying troubles to take ninth.

Elsewhere, mid-race contact for Dan Cammish played a part in him finishing outside the points in 19th in the second of the Dynamics-run Hondas, whilst Jack Goff failed to make much forward progress from 26th on the grid and was unable to make it into the top 20.

That was still a better result than fellow title challenger Adam Morgan, who retired with damaged suspension.