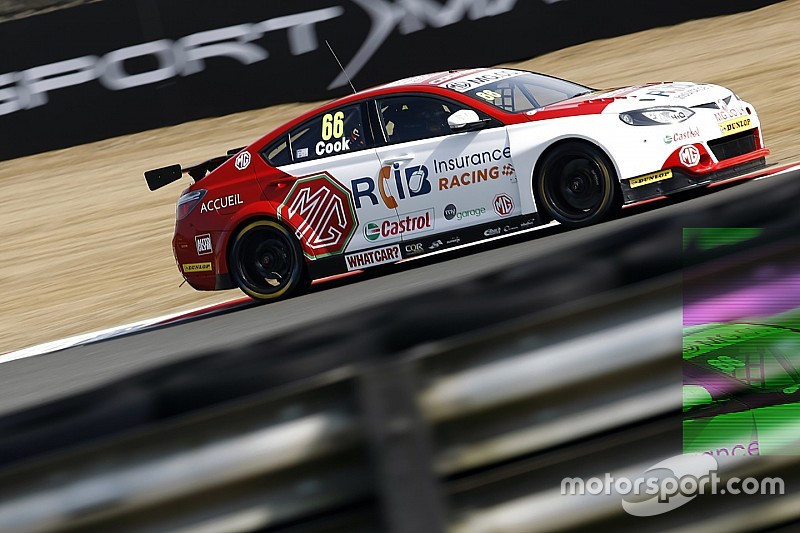 A slow-starting first practice session at Donington Park saw Josh Cook top the red-flag split session in the second round of the BTCC season.

The first few minutes of the session of the weekend saw majority of the front runners scrubbing in their soft tyres, with no significant times set as basic setup work was done.

The slow nature of the session continued for the first half, with the top time, a 1m11.555s from Jackson, still two seconds back from Jason Plato’s 2014 pole position record of 1m09.460s.

The time was cut to a 1m11.226s by Cook’s MG6, before a red flag just shy of the halfway stage brought an end to the proceedings.

An issue for both the Eurotech Honda Civics of Jeff Smith and Martin Depper at the Old Hairpin, with the latter having to be helped back to the pits by the tow-truck, caused the red flag, resulting in around 10 minutes of lost track time.

With just eight minutes to go the session got back underway, but there were no significant quick times posted, with Cook becoming the only person to go below a 71-second lap time before a second red flag, this time for the Honda Civic Type R of Matt Simpson at the Old Hairpin, ended the session.

Although the times were quite a way off being competitive, Aron Smith continued to show some strong pace in the Team BKR Volkswagen CC by setting the fourth fastest time.

He was closely followed by Colin Turkington in the Team BMR Subaru Levorg. Jake Hill also impressed with the eighth fastest time of the session.

Power Maxed Racing struggled, with both drivers being over six seconds off the pace in their Chevrolet Cruzes, while Rob Austin sat at the foot of the table being the only driver not to set a laptime in the 40-minute free practice.