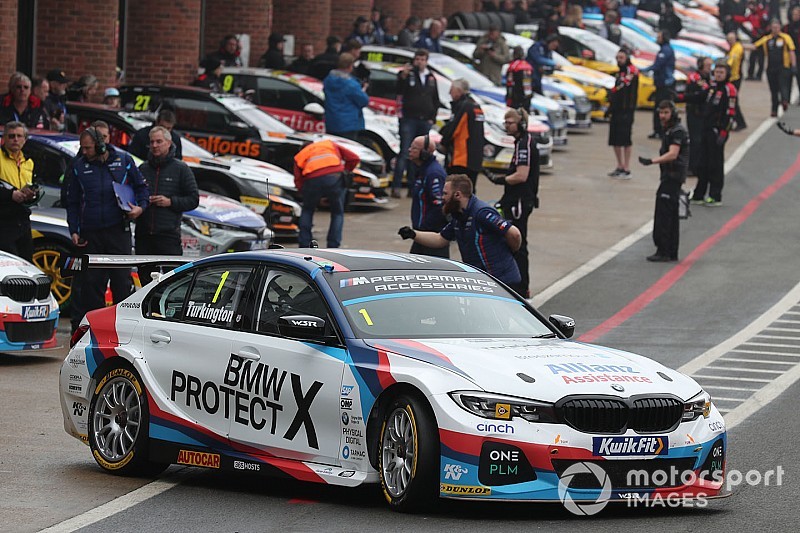 Prior to the first of three red flags the WSR driver set a 1m09.871s lap in his BMW, and when running resumed drivers struggled to improve, leaving him clear of points leader Josh Cook and Ashley Sutton.

After rain hit the two practice sessions, and with more forecast for qualifying, it was imperative for drivers to bank an early time.

In the cold conditions many of the front-wheel-drive runners opted to pit and swap their warm front tyres onto the rear but lost time from the stops as the weather deteriorated.

That left the rear-driven cars to fight it out, with Andrew Jordan initially setting the pace with a 1m11.246s ahead of teammate Turkington.

The reigning BTCC champion did improve, briefly leading with a 1m10.770s, but had his time deleted for exceeding track limits to leave an improving Tom Ingram at the top.

In response, Turkington then pulled out a 1m09.871s – his eventual pole time – as a red flag with 21 minutes remaining was called.

Team Hard driver Bobby Thompson lost the rear end of his Volkswagen on the approach to the Old Hairpin and slid off into the gravel.

For pausing the session, he had time deleted and was not able to continue. Not having set a representative lap time, he lines up 30th and last.

After a lengthy stoppage to retrieve the car, the top 10 struggled to better their earlier efforts as light rain arrived over the second sector of the lap.

Nicholas Hamilton then caused another red flag with five minutes to go. He had survived a scare at Old Hairpin and re-joined across the grass but then lost his Motorbase Ford at the same place a lap later and also wound up in the gravel.

As the session continued for a final shootout, again no-one could match their previous times leaving Turkington on top as a final red flag was waved in the last minute.

When Chris Smiley slid across the grass, ex-Formula 1 driver Mark Blundell had passed the rejoining Honda but unsettled his Audi and so continued into the gravel at McLeans.

The stewards called time on the session then, with Turkington lining up on pole ahead of Cook, Sutton and free practice pacesetter Smiley.

Sam Tordoff will line up sixth for the first race ahead of Team Dynamics pairing Dan Cammish and Matt Neal – celebrating 20 years since his first BTCC win in 1999 for which he earned £250,000.

Jordan, in the third WSR BMW, failed to beat his 1m11.246s that had taken him top, eventually slipping to 16th .