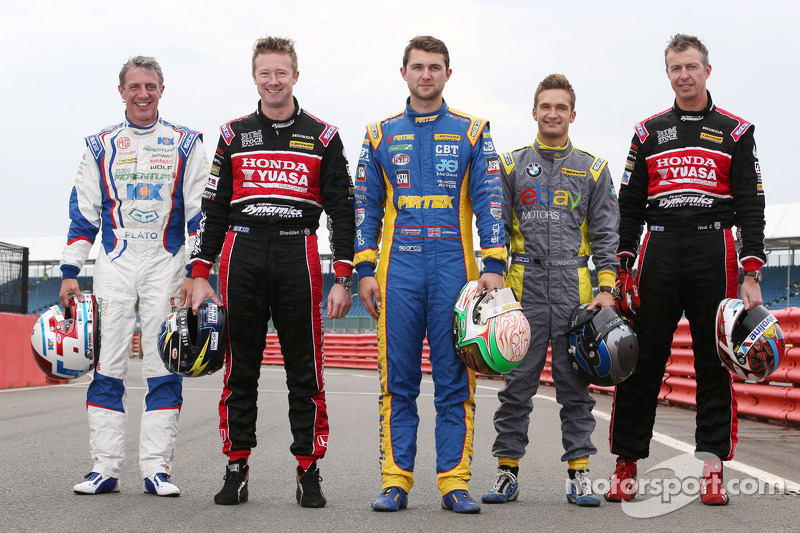 The Pirtek Racing driver has excelled throughout the campaign but it wasn’t until his double victory at Rockingham last month that he finally moved to the championship summit. Jordan duly extended the gap back to his rivals to 34 points last time out at Silverstone after a consistent display throughout the weekend.

“It was a surprising yet successful weekend at Silverstone and to leave there having increased our points lead was unbelievable,” said Jordan. “We need to be sensible and stay out of trouble at Brands, but we know a lot can happen. I’ll be nervous and there’ll be a lot of pressure of course so there’s no point in pretending it’s just a normal weekend as there’s a big championship at the end of it!”

If Jordan is to take the biggest prize in British motor sport, however, he will have to fend off the challenge of four former champions, who have an incredible seven BTCC titles between them.

Despite having led the championship for much of 2013, triple BTCC champion Matt Neal is currently second in the standings having had a difficult weekend at Rockingham in early September. Two podiums at Silverstone brought him back into contention, but he is still waiting for medical clearance to contest the triple-header final after a recent operation to repair a broken finger. Neal is just a single point ahead of Honda Yuasa Racing team-mate and reigning champion Gordon Shedden, who has fought hard to stay in contention after a tough start to his championship defence. The Scotsman won the final race at Silverstone last weekend and will be charging hard at Brands Hatch to try and retain the title.

Jordan, Neal and Shedden make it three Honda Civic drivers occupying the top three places in the championship, but the BMW of Colin Turkington and MG of Jason Plato can still mathematically wrestle the crown away.

Turkington has performed sensationally in the all-new eBay Motors BMW 125i M Sport this season, but it’s the unfortunate heartache from the most recent round at Silverstone that’s fresh in the memory. Not for the first time in 2013, the Ulsterman was forced out of the race after receiving contact from another driver, costing him valuable championship points in the process.

Double-champ Plato will also point to some off days that have seen him slip behind his rivals as the MG KX Momentum Racing squad failed to capitalise on its superior pace at a number of rounds. After a challenging mid-season Plato bounced back in style at Silverstone by claiming pole position and two race victories to keep his fading title hopes alive. His second win at the home of the British Grand Prix was his 80th BTCC success and arguably included the most sensational scrap of the season, with both him and Jordan swapping positions twice before the MG racer fought back to win.

With 27 races run, it is once again the legendary Brands Hatch GP circuit in Kent that will decide the destiny of this year’s champion and organisers expect a huge crowd to descend on the Kent venue. It is one of the most iconic circuits in world motor sport, both adored and enjoyed by fans and drivers alike.

“Brands Hatch GP is one of THE best circuits,” concludes championship leader Jordan. “It’s an old school layout with lots of undulations, lots of fast and slow corners – it requires a lot of confidence as a driver and I really love it. Going out into the trees on the Grand Prix loop is just incredible and you get a real sense of speed. Brands has so much history and it’s great for a driver and for the fans too.”

All to play for: Every championship up for grabs All five championships contested in the BTCC are still up for grabs going into the final round at Brands Hatch. Andrew Jordan not only leads the overall standings, but as an Independent driver also heads up that points table from the eBay Motors BMW of Colin Turkington who is the only driver capable of closing the gap.

In the Teams’ and Manufacturers’ standings it is 2012 champions Honda Yuasa Racing that leads the way. In both contests they are followed by fellow manufacturer effort MG KX Momentum Racing, and with so many points on offer over the weekend it’s all still to play for.

Pirtek Racing tops the Independent Teams’ Trophy followed by the West Surrey Racing-run eBay Motors squad. A stellar weekend for any of the three eBay Motors drivers could see them right in contention in the final race of the year.

Local Talent: Back to base for Airwaves Racing Airwaves Racing has had a season of highs and lows but the team will be racing at its home track on the crest of a wave having returned to the top order in recent rounds.

Based in nearby Wrotham, the Motorbase-run squad built and prepared three Ford Focus NGTC cars for the 2013 season – a huge undertaking for any organisation. With little testing time available ahead of the campaign the team’s results in the first half of the season resembled that of a squad trying to develop and improve its new machinery.

Since the mid-season break and an all-important two-day test at Snetterton, Airwaves Racing has taken six podiums – most recently with two for Irishman Aron Smith at Silverstone. Further to its regular driver line-up of Smith and former series runner-up Mat Jackson, the team has recently added multiple race winner Tom Onslow-Cole to further bolster its ranks as its focuses on a title challenge in 2014.

“Aron and Mat had brilliant race days at Silverstone,” said team boss David Bartrum. “That has set us up for our home race at Brands Hatch. We've got to race for ourselves and we'll be out to do what we can at our home race. We love the place and I'm looking forward to racing there.”

Timetable and Tickets The BTCC triple-header finale takes place on Sunday 13 October, with the entire race day being broadcast live and in high definition on ITV4 from 10:45.

Further to Britain’s biggest motor racing championship, the weekend will also showcase some of the best sportscar, single-seater and tin-top action that the country has to offer. In total fans will be treated to a whopping 15 races.

Michael Meadows is on the brink of retaining his Porsche Carrera Cup GB title but he’ll have to defend from Jonas Gelzinis in the final two races at Brands, whilst Josh Files is hoping to maintain his grip on the Renault Clio Cup UK as he bids to win the series that has fired so many drivers into the BTCC.

Harry Woodhead and Daniel Cammish have clinched the Ginetta Junior and MSA Formula Ford Championship of Great Britain respectively, so the pressure will be off in their final races. The Ginetta GT Supercup is another top series on the bill where newly crowned champion Tom Ingram bids to end his season in style.