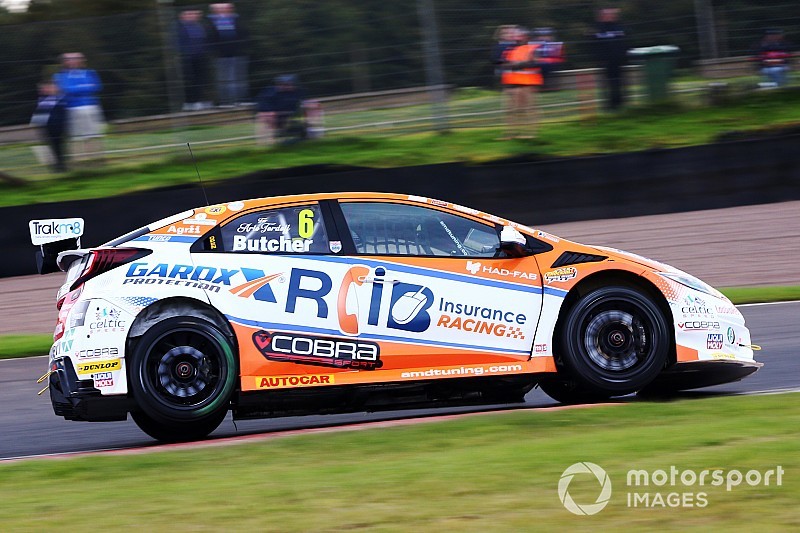 Local hero Rory Butcher took victory in the opening BTCC race at Knockhil, fending off a strong late challenge from the BMW of Andrew Jordan.

Butcher had started from a career first BTCC pole in his AmDTuning.com Honda and blasted into an immediate lead, while Jordan powered his WSR-run BMW inside the Team Dynamics Honda of Dan Cammish to grab an early second spot.

The race was neutralised early on following a clash between Michael Crees’s Team Hard VW and the Motorbase Ford of Nicolas Hamilton.

Once racing resumed on lap eight, Butcher continued to fend off his foe, although he was struggling with a loss of second gear – which is only used under power accelerating away from the hairpin on the 1.27-mile track.

That gave Jordan fresh hope and he kept the pressure on. His move for the lead came as the duo powered out of the hairpin to begin the 27th and last lap.

Jordan got better traction and went to the outside of the Honda, drawing level as the pair went over the timing line and then moving to the inside for Duffus Dip.

However, 2013 champion Jordan was unable to slow the rear-wheel-drive machine and ran wide, allowing Butcher to pounce down the inside going into McIntyres and regain the advantage, which he then held to the flag.

“Andrew was on a mission in that race,” said Butcher afterwards. “After the safety car period, I knew I had lost second gear, but third to sixth were OK. It was alright everywhere apart from the hairpin which I was having to do in third instead.

“I was trying to build a gap in the early part of each lap to allow me the breathing space. It nearly worked, but Jordan just nipped ahead. I am relieved I was able to get it back.”

Jordan said that his unusual line going into Duffus, defending from Butcher, had been his undoing. “I had been on the dirty side of the circuit and that meant that I couldn’t get the car into the corner properly," he said.

"I knew quite early on and decided to bail out of it. Credit to Rory though, he has driven brilliantly so far this weekend.”

Behind Jordan, Cammish took the final rostrum step after a tough race. He had chosen to use the option tyre, which is the less-favoured medium Dunlop rubber.

He was jumped early on by Tom Chilton’s Motorbase Ford, but regained the position when Chilton ran wide coming out of the chicane on lap 11.

Despite that, Cammish was forced to look to his mirrors as points leader Colin Turkington, in the WSR BMW, was glued to his rear bumper for the final 15 laps.

Further back, champions Matt Neal and Ash Sutton both failed to finish after a collision on lap 11. Sutton put his Subaru down the inside of the medium-tyred Honda going into McIntyres as they battled over 10th place. Both were forced to retire with damage as a result.