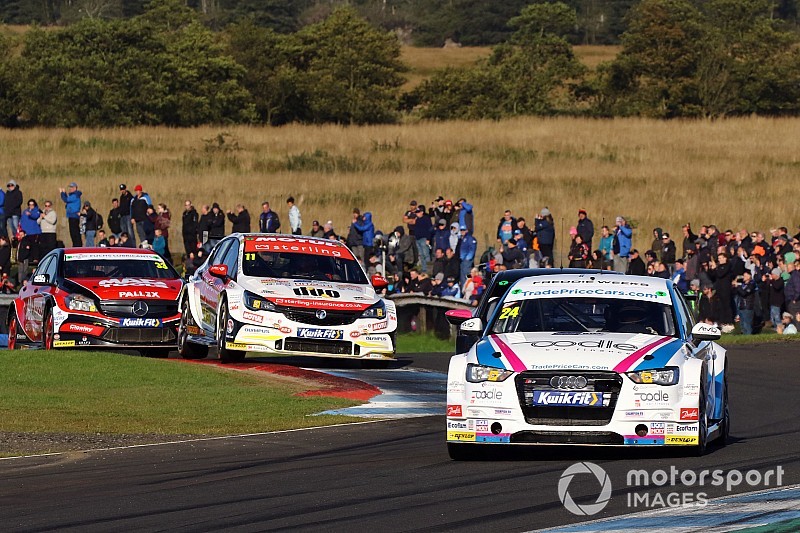 Jake Hill took a maiden BTCC victory by dominating the final race of the weekend at Knockhill in his Trade Price Cars Racing Audi.

Hill, who was using the softer tyres and went from pole position with only 6kg of success ballast, controlled the pace throughout the 27 laps despite two safety car interruptions.

The first was caused when seventh-placed starter Senna Proctor spun his BMR Racing Subaru into the path of the following WSR BMW of Andrew Jordan, which took the race two winner and championship chaser into the gravel and out of the event.

Hill stretched out a gap to the chasing BTC Racing Honda of Josh Cook after the restart and pulled out almost one second until a second safety car was called when a loose wheel from Mike Bushell's AmDTuning Honda ended up on track.

After a single lap behind the caution car Hill again powered clear and, despite a wobble on the final lap coming out of the chicane, he held on to take the first win for the marque since Rob Austin prevailed at Rockingham in 2014.

Hill won the reversed grid race at Oulton Park in June, but was penalised for contact and was stripped of first place

"I am pretty sure I will be able to keep this one," said Hill.

"I had to push hard all the way through and, even in my 100 or so BTCC races, I have never had to control a restart from the front. It went well, but I was pushing hard.

"I nearly slipped up on the last lap when I was going through the chicane. Josh was pushing and I was pressing on, and I was just a few millimetres into the gravel. It was a scare - but I am delighted."

Behind Cook, Adam Morgan forced his Ciceley Motorsport Mercedes inside Jason Plato's Power Maxed Racing Vauxhall at mid-distance to grab a podium finish, his second in as many meetings.

Plato fell down the order as first Chris Smiley barged ahead of his rival at Clarks and then Tom Ingram also got ahead at Duffus Dip towards the latter stages to grab fifth.

The top 10 was rounded out by Aiden Moffat in his Laser Tools Racing Infiniti and Jordan's WSR teammate and fellow title battler Colin Turkington.

The reigning champion had started 19th after dramas in race two, and fought his way up the order in the BMW.

His 10th place finish, allied to Jordan's misery, means that Turkington maintains his grip at the top of the points but is only 10 marks ahead of the sister car.

Cammish is now 11 points off the summit in his Honda with six races remaining.