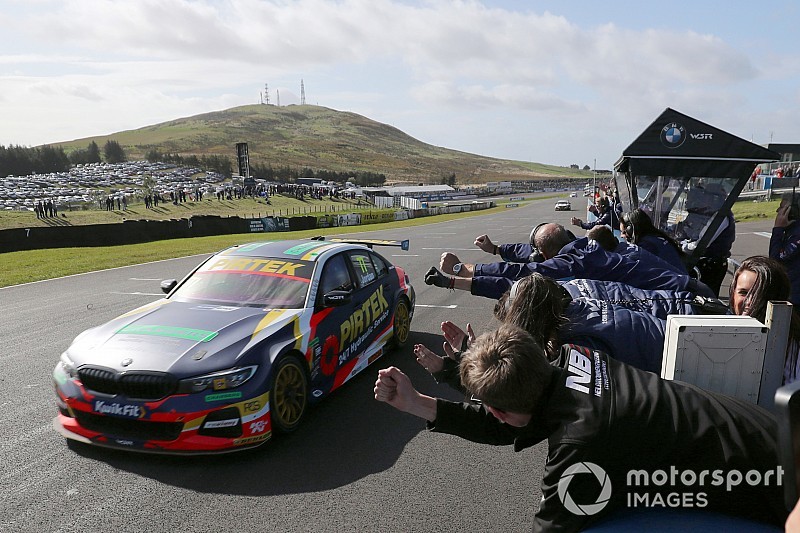 Andrew Jordan's race two victory in the BTCC at Knockhill has slashed teammate Colin Turkington's points lead to just four after a disaster for the sister car.

WSR BMW driver Jordan powered away from the front row to claim the lead into Duffus Dip for the first time, while pole man Rory Butcher, who had the less favourable medium tyre and full ballast, slotted into second place in his AmDTuning Honda.

While Jordan settled into his rhythm, Butcher came under attack from Dan Cammish's Team Dynamics Honda. The positions swapped at the end of lap six when Cammish made a late lunge on Butcher at the hairpin to claim second.

Butcher was delayed in the move and it allowed Turkington's BMW to power ahead of the Honda too by the time the pack had reached Duffus Dip at the start of lap seven.

Butcher tried to reclaim third place down the inside into McIntryes but made contact with the rear of the BMW, spinning Turkington into the gravel. The Northern Irishman would recover to 19th spot, but was out of the points.

Jordan continued unflustered to his sixth victory of the campaign from Cammish, while Butcher took third place on the road under pressure from Senna Proctor's BMR Racing Subaru.

Butcher's podium finish will stand, but the 32-year-old has been handed a five-place grid penalty for the final race of the weekend.

Winner Jordan said: "That was an amazing car - I could do anything I wanted with it. It is the best touring car I have ever driven and it is pretty much as we rolled it out of the truck this weekend.

"I didn't see what happened [to Turkington] because I had my eyes forward. I have enough on my hands coping with my own race. Of course, it is a shame for BMW but I am selfish. My sleeves are really rolled up now."

Jordan's win and Turkington's non-score means that the gap between the two at the head of the standings has gone from 30 coming to Knockhill to four. Third in the standings, Cammish is only 15 points away from the top of the table.

Double champion Alain Menu performed the reversed grid draw duties, and he pulled the number 10, putting Hill on pole for the final race of the day.