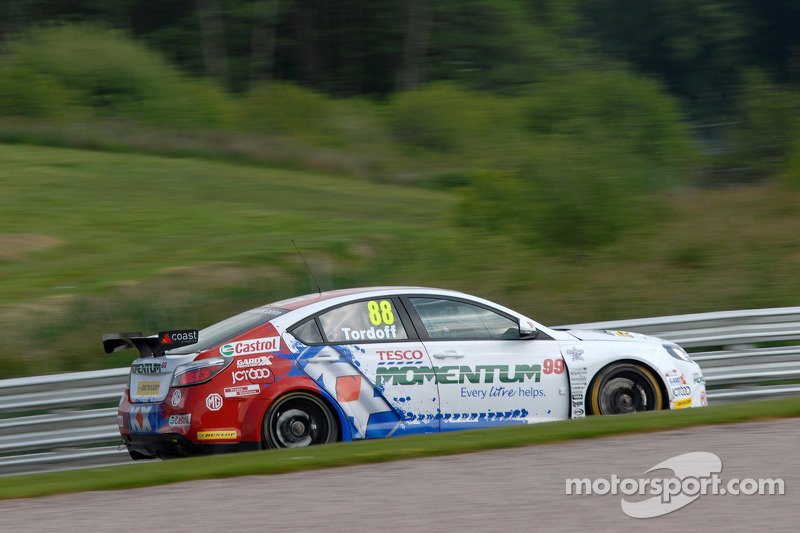 MG racer Sam Tordoff has claimed his first BTCC pole position after a sensational effort during qualifying at Snetterton. Having set the pace during practice earlier today, Tordoff obliterated the lap record in qualifying, beating Frank Wrathall’s 2012 flyer by nearly nine tenths of a second. 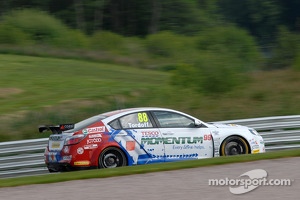 As MG KX Momentum Racing continue to dominate proceedings at the Norfolk circuit, double-champ Jason Plato followed closely behind his team-mate, with Gordon Shedden and Andrew Jordan in third and fourth respectively. eBay Motors BMW driver Colin Turkington grabbed fifth, but there was high drama behind for the final place in the top six.

Irishman Aron Smith had fired himself into sixth with a great lap halfway through the session, before his running was cruelly ended on the next tour. The Airwaves Racing driver lost control of his Ford Focus on entry to Riches, and spun wildly before making heavy contact with the barrier on the exit of the corner.

A lengthy stoppage followed and despite the disappointment for the unharmed Smith, circuit conditions proved slower after the restart and there were no changes to the top order in the latter stages. So Smith incredibly held on to his best qualifying result of the season with sixth, although his car will need some major repairs overnight.

"The car’s not looking great right now, but it'll be fine," commented an upbeat Smith. "We've changed a lot on the car recently and it's just so much better. I did one flying lap, which was great, and then I made the mistake but sixth puts us in contention for tomorrow."

Adam Morgan was again the best-placed Toyota Avensis driver in seventh for Ciceley Racing, although Dave Newsham held that honour early on before having to settle for ninth.

Sandwiched between the Toyotas after producing his own stellar flying lap was the Vauxhall Insignia of Jack Goff. The reigning Clio Cup UK champion continues to make progress in his maiden BTCC season and his best qualifying result of the campaign here at Snetterton was mightily impressive.

Behind Newsham, there were contrasting emotions for the drivers occupying the next two positions. Daniel Welch hauled the Proton Gen-2 into the top ten for the first time this season, whilst championship leader Matt Neal endured a challenging run. The Honda Yuasa Racing driver had comfortably qualified inside the top ten for the opening five rounds of the season, but the triple-champion could only manage 11th fastest around the 2.97 miles of tarmac today.

The VW Passats had a difficult time of it too, as Tom Onslow-Cole ended up 14th and Warren Scott failed to set a time after his newly-built machine ground to a halt early on.

There was late excitement in the Jack Sears Trophy battle when series leader Lea Wood set the quickest time in the final minutes. Wood’s Vauxhall Vectra had suffered myriad of problems during the day, including a misfire for much of qualifying, but his Wheel Heaven/Houseman Racing squad corrected the fault for the final ten minutes of the session. His later flyer eclipsed the previous best JST effort, set by the Honda Civic of James Kaye.

Sam Tordoff: “I’m thrilled with that. We knew we had the pace – we showed it in the test during the summer break, but you never know how the weekend is going to pan out. The first thing you’ve got to do as a racing driver is beat your team-mate, and when that means beating Jason Plato it’s no mean feat. This gives us the perfect opportunity for tomorrow – I’ve shown I’ve got what it takes to beat the guys around me, now it’s time to go and do it.”

Jason Plato: “The fact is we know that I’m carrying 27kg of ballast and Sam isn’t – we know that’s worth three tenths, but in saying that I made a mistake on my lap. He nailed the lap, his performances this year are coming on leaps and bounds – he’s really in the groove now and that’s one of the reasons we got him in the car because we knew he was going to be quick.

Not that there was a monkey on his back because he’s already done such a great job, but from now on his demeanour will change and that will make him even quicker. I should’ve done a 1:55.7s and that would’ve been about my best – I didn’t have the pace in my car to beat Sam today.”

Lea Wood: “We’ve struggled with a misfire all morning, but actually managed to fix it during the red flag period in qualifying. I was really pleased with the lap – and we only used one set of tyres which will really help us out tomorrow. I think early on we’ll be able to mix it with some of the NGTC drivers too, but we really just need to focus on staying ahead of the S2000 competition.”

Tordoff storms to first win in race 1 at Snetterton