Neal extends points lead with victory in Race 3 at Croft 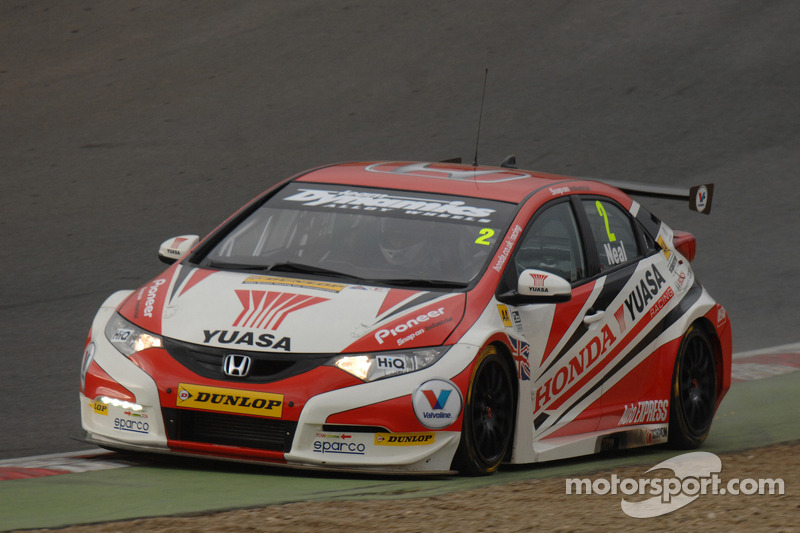 Matt Neal can thank the rain that finally did arrive to soak the Croft circuit in the final BTCC race this weekend. His Honda performed to his liking despite the tricky conditions.

Honda Yuasa Racing’s Matt Neal will head into the summer 6 week break with a 19 point lead in the Dunlop MSA British Touring Car Championship, thanks to victory in round 15 at a very wet Croft circuit.

After the rain had threatened to come down in race 2 teasing the MG’s to gambling on wets, race 3 was a no brainer with heavy rain before and throughout the race making conditions very tricky indeed.

Neal managed to get into the lead on lap 3 and kept the car on track to secure his 52nd career victory, despite a hairy last lap that almost saw the triple champion drive off the circuit twice as he admitted after the race, “I was so lucky. Colin had a moment on the lap before and that gave me a bit of space but the puddles were getting bigger and I just got around the outside. We’re only halfway into the championship but it’s great to go into the break with the bragging rights but it’s going to be game on back at Snetterton.”

Double race winner from earlier in the day Colin Turkington, just missed out on becoming only the third man in history to take all three wins in a day in his eBay Motors BMW 1 series M sport, as he splashed his way up from 8th to 2nd just missing out on the win by just 0.300 following Neal’s last lap dramas.

Understandably after the race Turkington was delighted with his days work/the progress made by the team and said, “I was quite pleased with second but I wasn’t prepared to risk it. It’s been my best ever score on a BTCC weekend and I now feel we have found the sweet spot with the car and now I’m quite happy for the second half of the year.”

Making it onto the podium for the first time today was Andrew Jordan in his Pirtek Racing Honda Civic. Jordan had earlier put on the move of the race claiming third from Nick Foster, as he went around the outside of the BMW in the puddles to end a challenging day on a high as he said, “The car hasn’t been exactly where we want it to be this weekend but it’s great to get on the podium on a bad day. During the break we now have to work very hard and keep our head down to catch up.”

Surviving an early scare to take 4th after running off the circuit on lap 2, was the 2nd Honda Yuasa Racing of Gordon Shedden. During the closing stages of the race the current BTCC champion also made up 4seconds to pass the Speedworks Toyota Avensis of Dave Newsham, who managed his best result of the season so far in 5th.

Perhaps the drives of the race came from the two MG KX Momentum Racing drivers, Jason Plato and Sam Tordoff, as they battled their way up from 20th and 21st places on the grid following their wet gamble in race 2. They took a fine 6th and 7th with Tordoff also taking fastest lap. The big positive to come out of race 3 for MG was no doubt the pace of the car in the wet which was always their big weakness last year.

As expected it was Nick Foster in his eBay Motors BMW who took the lead into the first corner as he led the opening stages of the race. Sadly for Foster he couldn’t stay at the sharp end of the field as he slipped back to 8th, with Aron Smith making it onto the top 10 for the first time of the day in 9 in his Airwaves Racing Ford Focus.

Rounding out the top 10 was Jeff Smith in the second Pirtek Racing Honda Civic, after he was demoted a place in race 2 for contact with Newsham and, as this was his third strike of the season, this also meant a 5 place grid penalty for race 3.

Another driver to be demoted a place after race 2 was Rob Collard in the third eBay Motors BMW after a final corner tap on Jordan dropping him down to 6th. Collard was once again out of luck in the third race of the day, spinning his BMW out of 8th eventually finishing in 14th.

Someone else out of luck in race 3 was pole sitter Adam Morgan in his Ciceley Racing Avensis. Morgan half spun but continued on lap 3 before crashing heavily, ending his race on lap 5 going straight into the barriers at high speed into the first corner.

Meanwhile the final driver of the day to take victory in the Jack Sears trophy was Lea Wood in a battered Wheel Heaven/Houseman Racing Vauxhall Vectra, as he extended his lead at the top of the Trophy by 2 wins while the rest of the S2000 spec cars self destructed.

With the Jacks Sears Trophy category already depleted to 4 cars, second race winner David Nye retired early in his Welch Motorsport Ford Focus. 1st race winner Jake Hill, for Addison Lee Motorbase, got involved in a collision as Mat Jackson locked up his Airwaves Racing Ford Focus, hitting the Welch Motorsport Proton of Dan Welch into a spin which hit the Ford Focus of Hill ending his race. The final car in the category of James Kaye, in the AmDtuning.com VW Golf, first hit the barriers on lap 5 sending him a lap down before spinning again late on in the race to leave Wood as the only car standing to take win number 7 of the year.

AmDTuning.com vows to bounce back from tough Croft