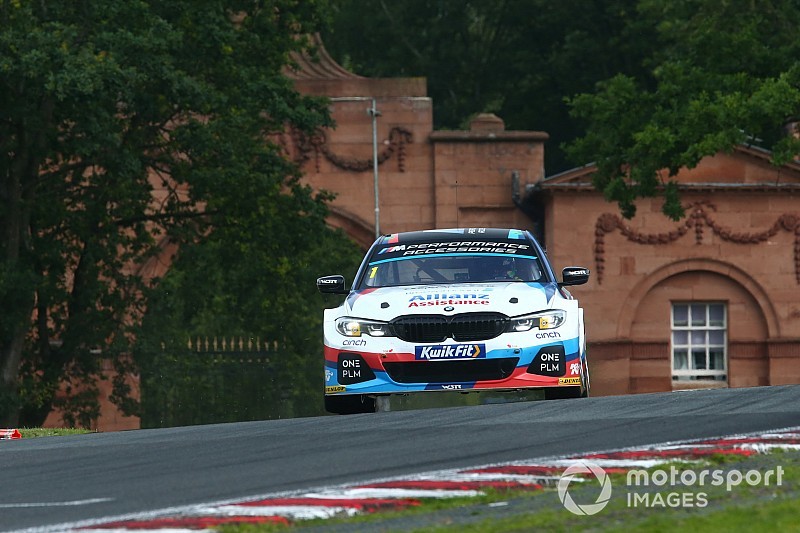 Colin Turkington converted pole position into his third win of the British Touring Car Championship season in the opening race at Oulton Park, despite carrying the maximum success ballast.

The current points leader scored the only victory of his 2018 title winning campaign in the second race at the circuit last year, and was again comfortable as he took the spoils two seconds clear of runner-up Dan Cammish.

Despite his BMW 330i M sport being laden with the full 54kg of ballast for his position in the standings, Turkington used the advantage of rear-wheel-drive to make a sublime launch and he held first place into Old Hall.

Like his BMW teammate Turkington, fourth-starting Andrew Jordan also opted to run the softer compound tyre in the first race and enjoyed a strong getaway.

Team Dynamics driver Cammish slid through on the inside and Jordan hung on around the outside to relieve Tordoff of third.

That allowed Turkington breathing space early on and he finished the first lap with a 0.9s cushion.

A run of fastest laps from Cammish brought that down to 0.5s as the soft tyres appeared to wear for Turkington.

But the double Donington Park winner was given respite after a strange component failure for Matt Neal brought out the safety car.

At the apex for the fifth-gear Druids corner, the front-left wheel on Neal’s Honda jettisoned and he careered into the tyre wall on lap six.

The race was extended by the maximum three laps up to 18 as a result of the delay, and Turkington resumed the race unchallenged.

After the first flying lap, Turkington was almost 0.8s to the good over Cammish and slowly stretched that to 2.021s come the chequered flag.

Cammish remained clear for second, while four-time winner this season Jordan rounded out the top three – his first podium when not winning.

The Toyota Corolla of Tom Ingram was seventh, with a battered Ashley Sutton claiming a late eighth.

Sutton had started 13th in his Subaru and made swift progress through the pack, but while battling Jason Plato for eighth at Island Bend, Ingram knocked Sutton wide. With Plato on his outside they touched and Sutton took to the grass and dropped to 10th.

In a bid to recover he clattered into the back of Adam Morgan under braking and the suspension damage proved terminal for the Mercedes.

Sutton turned in an incisive overtake under braking for the hairpin to depose Plato on the penultimate lap.

After an engine problem in qualifying, second in the points Josh Cook made progress from 22nd to 18th.

Ex-Formula 1 driver Mark Blundell retired when his Audi S3 overheated – he ran over the grass and clogged the radiator in a scrap with Rob Smith.