On a very cold day in England, Andrew Jordan surprised his rivals by earning the first BTCC pole of 2013.

Pirtek Racing’s Andrew Jordan has taken pole position at a snowy Brands Hatch for the opening round of the Dunlop MSA British Touring Car Championship.

The session started in sunshine but, with dark clouds looming overhead, it wasn’t long before there was yet another sleety snow shower; which had already happened a number of times during the course of the day. Unlike the others this was bad enough to make the track greasy and slippery and as a result this effectively meant the session was at an end for improvements just after the mid way mark.

Current Independent champion Jordan, who had also topped practice 2 and the official testing at Donington, certainly wasn’t complaining and said, “It’s nice to qualify on pole, obviously it’s the only time that everyone will have no ballast so it’s a complete level playing field. We’ve been quick in testing, and earlier today we did a race run and the pace was really good then as well. That was really the easy part though – tomorrow’s the hard part. We’ve got a lot of work still to do, but we’ve started in the right place.” 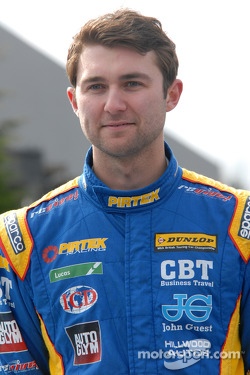 Making it an all Honda front row will be current BTCC champion Gordon Shedden in the works Honda Yuasa Racing Civic. Amazingly Shedden has never won at the Kent circuit and after missing out on pole by just 0.096seconds said, “That’s got to be one of the strangest sessions I’ve driven in for a long time. It was definitely the first session I’ve qualified in where it snowed! We’re on the front row which is a great place to be. You’re never going to win the championship at Round 1 but you can make life really difficult for yourself. It’s great to be at the sharp end and with three Honda Civics in the top four, and I’m sure there are going to be three exciting races tomorrow so I can’t wait.”

In contrast to Shedden, former double champion Jason Plato has taken 19 wins at Brands Hatch and hopes he can add to that tally as he put his MG KX Momentum MG 6 on the second row of the grid. After qualifying Plato admitted that he had been irritated by other competitors and said, “I’m a bit frustrated with qualifying to be honest. There were just lots of cars out there not paying attention and I didn’t get a clear lap in. On my last lap I had purple sectors until the last corner and I got badly baulked – so I'm a bit frustrated that I didn’t reach my full potential and didn’t get the best out of the car otherwise I think we could have had a good chance at pole. Still, we’re not far off so we’ve still got a chance to win from there.”

Alongside Plato on row 2 will be his great arch rival, triple champion Matt Neal, in the second Honda Yuasa Racing Civic. Neal was lucky to survive an early spin in the session after going off exiting Graham Hill bend but, fortunately for Neal he didn’t hit anything and was able to rejoin the session.

Lining up 5th will be Sam Tordoff in the second MG KX Momentum Racing MG 6, who put in a good performance during his debut meeting for the team in only his second ever BTCC race weekend following a one off meeting at the wheel of a Vauxhall Vectra in 2010 for Triple 8.

Last year’s round one pole winner Dave Newsham will start his debut race for Speedworks 6th in one of their Toyota Avensis’ and he will have Rob Austin in his own prepared Wix Filter Audi A4 alongside him.

After performing well during the day’s morning Free Practice sessions, Jeff Smith continued his good pace into qualifying where he was able to put the second Pirtek Racing Honda Civic in 8th; although he was another driver to have an earlier spin when on cold tyres he lost the back end on his first lap out of the pits spinning harmlessly down Paddock Hill bend.

In 9th will be the first of 3 eBay Motors BMW 125is, although surprisingly it is the car belonging to Nick Foster, while Adam Morgan rounds out the top 10 in his family run Cicely Racing Toyota Avensis with the team making their debut in the championship this weekend.

Just outside the top 10 on row 6 will be the two Jackson’s of Ollie and Mat. Ollie Jackson will start his debut race for the Speedworks team in 11th while Mat will start 12th in the first of the Airwaves Racing Ford Focus’.

The session proved to be a disappointment for Airwaves Racing, who expected big things at their home race, with Aron Smith lining up 14th in the second car and Rob Collard sandwiching the two blue Fords in 13th in the second eBay Motors BMW.

There was however much disappointment for the third eBay Motors BMW driven by Colin Turkington, who returns to the series for the first time since winning the title at the circuit in 2009, had gone well during the morning session but lost the back end of his BMW exiting Druids hairpin where he was collected by the unlucky Jack Goff, which put an end to both their sessions very early on resulting in their starting 25th/26th respectively.

This was particularly hard on reigning Clio Cup champion Goff, who was making his BTCC debut, and on Tony Gilham’s squad. The team worked miracles to get a pair of Vauxhall Insignia’s out for him and another one for James Cole, who ended up 22nd, with Goff never having turned a wheel in the car prior to Free Practice 1.

The team also managed to get a single VW Passat out on track for Tom Onslow-Cole, which will run under a separate team name of PPCGB.com/Kraftwerk Racing compared to the Insignias which will be run under RCIB Insurance Racing. Like the Insignias, the Passat had never turned a wheel prior to the start of the day but Onslow-Cole was still able to trade the fastest time early on in the session before eventually finishing 17th.

Another unlucky driver on the grid will be Frank Wrathall who will start dead last on the grid after failing a ride height check. Wrathall had posted a time inside the top 10 but had his times disallowed following the check and with the sleet appearing he couldn’t re-set a time.

Plato and Neal share the spoils at Brands Hatch