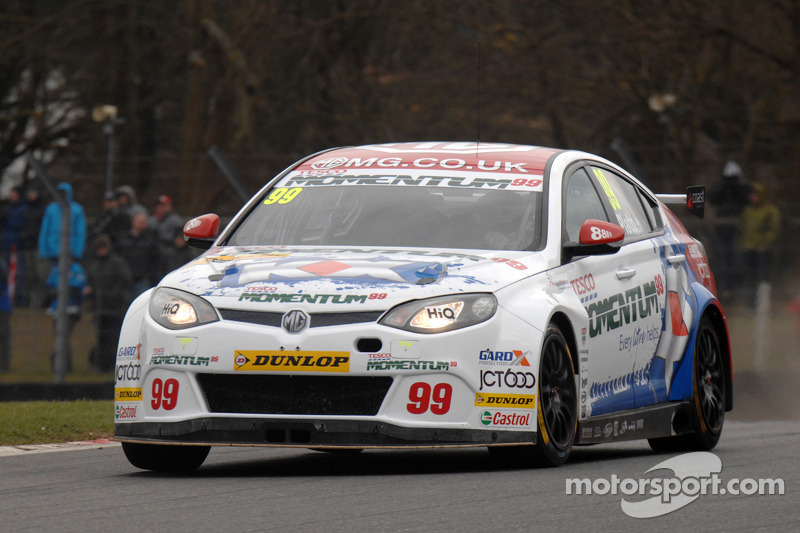 Jason Plato’s teammate Sam Tordoff gave MG KX Momentum the front row for the first of the three races that will determine the 2013 BTCC champion between five drivers including Matt Neal who crashed heavily in qualifying.

The front row of the grid for round 28 of the Dunlop MSA British Touring Car Championship will have a familiar look to it, after Jason Plato led home team mate Sam Tordoff for the third meeting in a row in an all MG KX Momentum Racing lock out at the front of the grid.

In terms of the championship battle it is advantage Andrew Jordan in his Pirtek Racing Honda Civic as he will line up 3rd on the grid while his closest championship rival Matt Neal will start 16th after a massive qualifying accident. Neal though wasn’t the only person to have a big accident during the day with Aron Smith rolling his Airwaves Ford Focus during Free Practice 2.

More about the accidents later, as at the front of the grid for the fifth time this season it was an all MG lock out at the front with Plato leading home his younger team mate by just 0.036s. Qualifying took part in bright late sunshine although tomorrows forecast is looking less than favourable with heavy rain expected for the majority of the day.

The wet weather has in the past caused issues for the MG however Plato believes that the Triple 8 machine will be good come rain or shine as the former double champion said, "The car is properly hooked up in the dry. I think the amount of rain we are due to have tomorrow will be like race three at Croft, and we were quick there too. I am very pleased to be on pole and delighted that Sam took P2."

Despite mathematically being in with a chance of the title it is highly unlikely that Plato will be a contender for the crown after his mid-season bad luck as he starts a massive 49 behind Jordan in the current standings.

Therefore the current Independent champion will be delighted with third on the grid in front of both Honda Yuasa Racing Honda’s. Jordan starts the day 34points in the lead of the championship with 20 points plus a couple of bonus points in each race on offer it will take a disaster for Jordan not to claim his maiden crown.

Speaking after qualifying Jordan declared himself “very happy” with third on the grid and said, “I love driving this circuit and I really hung it out there, so it was a big sigh of relief to come back in and see we got third. I really enjoyed it and despite there being a championship on the line I feel less pressure when I'm in the car."

Never the less this is Touring Car racing and anything can happen as demonstrated today with two massive accidents. The first happened in Free Practice two when Aron Smith rolled his Airwaves Racing Ford Focus exiting Paddock Hill bend heading up to Druids after having to take avoiding action of other competitors.

Thankfully Smith was ok although sadly for the double podium finisher last time out at Silverstone the car less so as he was forced to miss qualifying as a result and after the accident said, "I am shaken but I am all ok. There is no fault of Frank Wrathall or Ollie Jackson ahead but as Jackson ran wide, Wrathall then stood on the brakes with me close behind him. I'm optimistic for tomorrow but I'm not sure about today."

The second and more crucial accident happened in qualifying to Neal who was hoping to secure his fourth BTCC crown this weekend. The crash happened in a near identical place to Smith’s earlier accident after Neal had dropped two wheels in the gravel exiting Paddock Hill bend which spat his Honda Civic across the circuit resulting in a massive front end impact.

Neal was only declared fit to race this weekend yesterday morning after a martial arts accident left him with a broken middle finger prior to Silverstone. Since then Neal has undergone a successful operation, which has however left him in more pain than before Silverstone.

Despite this further set back the team have reported Neal should be fighting fit for tomorrow’s showdown although he will have it all to do starting 16th on the grid for tomorrow’s opening race.

Things were a lot better for current BTCC champion and Neal’s Honda Yuasa Racing team mate Gordon Shedden who lines up 4th on the grid as he heads into the day just 1point behind his team mate and 35 off of Jordan.

Starting 5th after once again catching the eye will be Adam Morgan in his Cicely Racing Toyota Avensis. This will be the last weekend that Morgan will drive the Avensis with the team having already announced their switch to Mercedes machinery next year and the former Ginetta champion will aim to end the year on a high.

In sixth will be Colin Turkington in his West Surrey Racing prepared BMW 125i M sport. The 2009 BTCC champion also holds a mathematical chance of the title although like Plato his chances are slim starting the day 48 points off of top spot.

The qualifying session proved to be a rough ride for him and eBay Motors team mate Rob Collard who ended up 9th as both suffered off track excursions. Collard twice went off track at Sheene Curve as did Turkington in the same place latter in the session.

In 7th was Tom Onslow-Cole competing in his third meeting for Airwaves Racing giving the team something to smile about in their home race after Smith’s earlier roll, while Onslow-Cole will be hoping to put behind him his disappointing meeting last time out at Silverstone.

In 8th is Frank Wrathall as he returns to the circuit that brought him his only BTCC victory to date which he achieved during the final race of last season in his Dynojet Avensis. This year has proved to be a nightmare for Wrathall and last time out at Silverstone was no exception running 4th early in race 1 before fading and finishing outside the top 10 while in race 2 an opening lap collision brought an early end to his weekend.

In a hugely impressive 10th was Jake Hill in his Rob Austin Racing prepared Audi A4. Hill will run under Exocet Racing and the former Ginetta racer impressed immensely driving an NGTC car for the first time after an earlier appearance at Croft driving an S2000 Ford Focus.

Just missing out on the top 10 was Dave Newsham in his Speedworks Motorsport Toyota Avensis. Newsham had topped Free Practice 1 which took part in very damp conditions following heavy overnight rain and during qualifying was perhaps the luckiest man of all after doing exactly the same as Neal running wide at Paddock Hill bend except somehow he managed to spin 360 degrees in the middle of the circuit to end up pointing in the right direction.

Lea Wood will once again lead the S2000 class as the already crowned Jack Sears Trophy champion qualified his Wheel Heaven/Houseman Racing Vauxhall Vectra 19th overall. There could have been a possible 6 S2000 cars on the grid this weekend however the number will only be half that with Liam Griffin in his Addison Lee Motorbase Ford Focus being the other competitor alongside the returning Shaun Hollamby in the hugely popular AmD Tuning.com Golf giving the car one final outing.

Plato takes pole as Neal crashes out at Brands Hatch