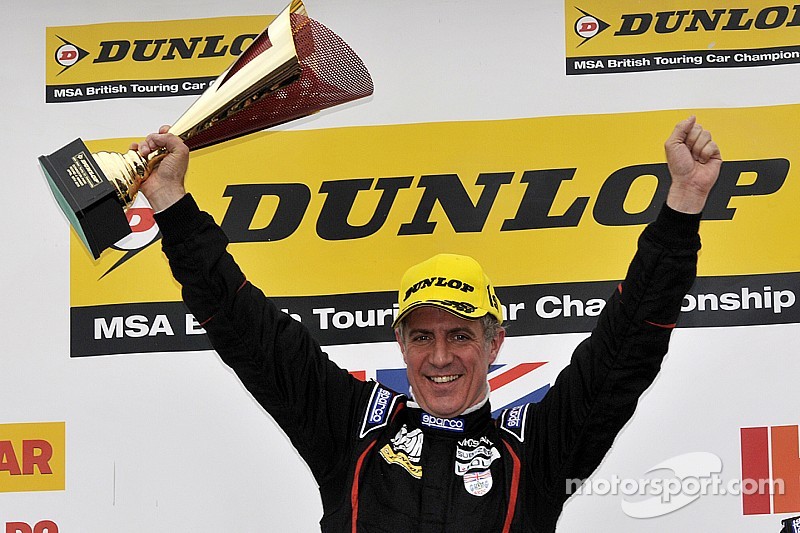 Jason Plato secured his first victory as a Team BMR driver in the first BTCC race at Donington in imperious fashion, taking a lead he would never lose on the opening lap.

Starting from third on the grid, Plato made a fine getaway to move ahead of Gordon Shedden’s Honda on the drag down to hill to the Old Hairpin, before easing past poleman Colin Turkington approaching the final chicane.

Plato then duly began to pull away, as Turkington struggled to fend off Shedden carrying 33kg of ballast in his Volkswagen CC, the Ulsterman ceding second place at the Old Hairpin on the second lap.

An early fastest lap from Shedden suggested the Scot may have been able to challenge for the lead, but Plato, denied a near certain victory at Brands Hatch with a puncture, was able to manage the gap throughout, ultimately crossing the line to win by 1.4 seconds.

Turkington meanwhile was able to regroup, seeing off a challenge from Andrew Jordan’s MG and closing right on to the tail of Shedden’s Civic Type-R by mid-distance.

But Shedden was able to hang on to finish second despite a lock-up at Redgate and a moment a few laps later at McLeans, his fastest lap giving him pole position for race two.

Rising from a lowly 19th on the grid, Collard looked as if he would finish seventh after passing Jack Goff’s MG and Adam Morgan’s Mercedes in one move at McLeans, but Goff was able to keep in touch with the BMW driver and outdrag him to the finish to clinch seventh.

Behind Collard, Morgan, the best of the soft-tyre runners, was ninth ahead of Rob Austin’s Audi, Warren Scott’s BMR VW and Andy Priaulx, who made up 11 places after a mechanical problem in qualifying left him 23rd on the grid.

The other soft-tyre runners struggled for pace, with leading rookie Josh Cook dropping from his grid slot of sixth to 13th, and Matt Neal’s Honda plummeting 10 places to 17th, his problems compounded by carrying maximum success ballast.