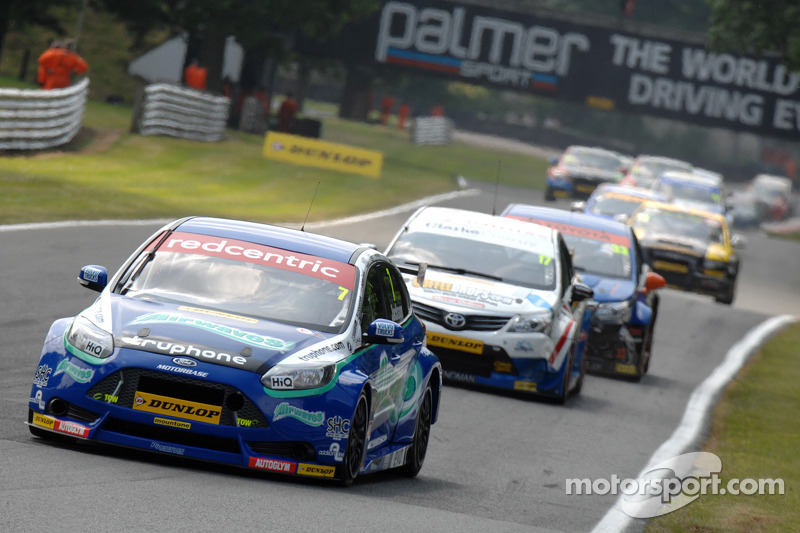 The determination and hard work shown by the Airwaves Racing team during the opening rounds was justly rewarded. 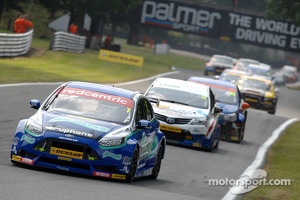 With round 6 marking the first anniversary of the maiden run of the Motorbase built next generation touring car; the determination and hard work shown by the Airwaves Racing team during the opening rounds was justly rewarded with five trophies and three podiums during Sunday’s three races.

The opening race of the weekend proved to lay the perfection foundations for the Airwaves squad; with Jackson and Smith finding the pace in the Ford Focus ST’s that had proved elusive so far this season, and both Airwaves drivers put in a faultless performance to cross the line in P8 and P6 respectively.

With literally seconds to spare following a last minute clutch change to Smith’s Focus, Aron battled his way at the front of the pack for the entirety of race 2. The Dublin-based driver had made his way up into P2 by the closing laps before championship leader Matt Neal took advantage on the final lap, leaving Smith to end the race in P3 to secure Airwaves Racing’s first podium of the season – with team-mate Mat Jackson following closely behind in P4.

On a high from the days’ results; both Airwaves Racing drivers got off to a blistering start in race 3. With Mat Jackson making a bold move off the line to move past pole sitter Newsham – Aron followed his Airwaves team-mate through and the Mountune-powered NGTC’s slipped straight into P3 and P4.

As the frenzied final race progressed with increasing drama and incidents during the 15 laps; both Airwaves drivers did well to avoid the carnage and bedlam on track whilst under growing pressure to defend their positions; managing to deliver a stunning double podium for Airwaves Racing and its best result of the season so far with a P2 for Jackson and P3 for Smith.

Having come to Snetterton looking to celebrate the NGTC’s first birthday; the Airwaves Racing squad leave Norfolk in high spirits armed with a set of best results to date this season and the HiQ Teams’ Championship trophy for best performance of the weekend - having collected more points than any other team during Sunday’s three races.

David Bartrum’s squad is back in action again in three weeks’ time as the Dunlop MSA British Touring Car Championship heads to Knockhill for Round 7 on August 24/25.

Motorbase Performance Team Principal David Bartrum said: “Happy birthday to the Motorbase Performance NGTC! It was a year ago today that we brought the Focus here and started out on our journey of development, and obviously to come back this weekend after the break to get such a good result and the team’s trophy means a lot to me.

“Any podium is special, but having had a bit of a drought in the first part of the season, to then get that many podiums and the teams’ trophy is pretty special - you don’t get many independent teams win the team’s trophy. It just shows the work that goes into a weekend and it’s a testament to the team and how hard everyone’s worked and what a good job the drivers have done this weekend again; so I’m one very, very happy team boss.

“The first half of the season wasn’t great, and our aim now is to score as many points as we can for the second half and to get as many podiums as we can, and just get the good name of Airwaves Racing out there.”

Airwaves Racing driver Mat Jackson said: “Obviously it’s a year on from when we came here with the new NGTC Focus; we had a P4 then, so to go better and come away with a P2 is fantastic. It’s a massive turnaround for our season from where we’ve started and to come here and be able to challenge for wins is mega and I feel sure that going forward now we can deliver the results we need to be back in the mix of the championship.

“Everybody has worked so hard back at Airwaves to get the car in the place where we know it should be and the start of the season was not the way that we wanted to start. We knew that we were more than capable of delivering wins and it’s been massively frustrating - but the second half is certainly going to be interesting to watch because both Aron and myself are back in the mix. To come here today and take away three podiums between us is awesome.”

Airwaves Racing driver Aron Smith said: “The weekend started off really positive for us having a P6 in qualifying; and I’ve always said that once we qualified well we’d be on for a really strong weekend as our cars just get progressively better in all the races.

“The car was perfect all weekend. It was the most I’ve enjoyed driving the car this year because it was so much better than what we’ve experienced and it was nice to be back at the sharp end where we belong. To get our first podium for everyone in the team means something to me, but it means so much more for the rest of the team because they’re the ones that have put in the late nights to get the car ready.

“A sixth and two podiums is best weekend that I’ve ever had in my career and we’ll go to Knockhill now with a car that we know we can battle at the front with.”