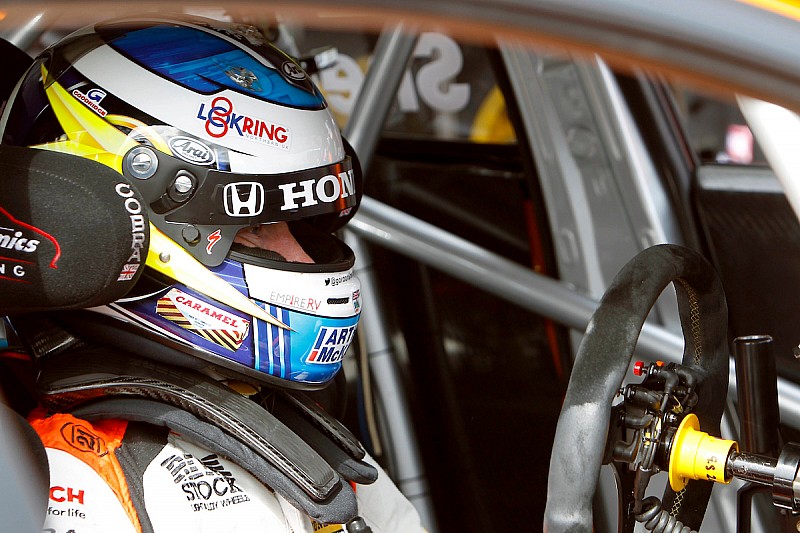 Gordon Shedden secured a second pole position of the BTCC session after emerging on top of a chaotic wet qualifying session at Rockingham.

Heavy rain prior to the start, mixed with thunder and lightning throughout, led to tricky conditions on track with multiple drivers taking trips off the circuit, as they struggled for grip.

Shedden topped the times for much of the half hour session, which started in conditions so dark it was akin to night time. The session had to be halted halfway through due to the worsening weather.

Even after restart, no-one could demote Shedden from top spot, with the Scot snaring pole by 0.288s ahead of the Ford Focus of Mat Jackson.

A late lap from Josh Cook saw him put his MG third on the grid, albeit six tenths off the pace, ahead of Jason Plato, the Subaru man being able to survive a trip through the gravel at Gracelands to snare fourth.

Teammate Colin Turkington and the second MG in the hands of Ashley Sutton rounded out the top six, with Tom Ingram (who lost his times mid-session for failing the ride height test), Matt Neal, Adam Morgan and Hunter Abbott then completing the top 10.

For championship leader Sam Tordoff, as well as his West Surrey Racing teammates, the session turned out to be nothing short of a disaster, with all three BMWs battling misfires that left them well down the order.