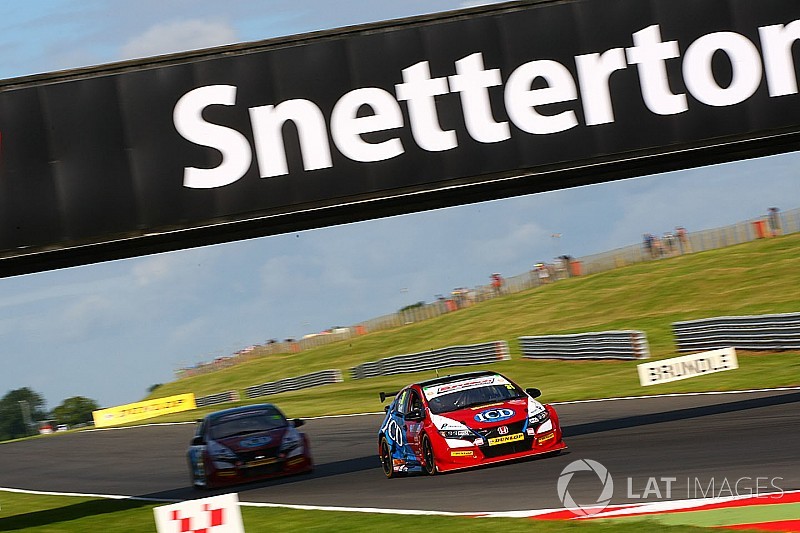 Goff, who was fastest in Saturday’s earlier second practice session, was one of the first front-wheel drive cars to set a representative time and moved to the top of the leaderboard with an initial best time of 1m56.039s a third of the way through the 30-minute session.

He then strung three fastest sectors on his second run as he lowered his benchmark to a 1m55.786s – leaving him 0.460 seconds clear of early pacesetter Colin Turkington.

Goff returned to the pits early and, with Turkington unable to improve, celebrated a maiden BTCC pole – beating his previous best of second from the Donington Park round earlier this year.

“We rolled the car out in FP1 as we’d left it after the test day [but] the car felt nothing like it had then,” said Goff.

“The lads did a bit of work after FP2 and it completely transformed it.”

The factory Team BMR Subaru of Ash Sutton had an initial effort that was good enough for third chalked off for exceeding track limits, but a lap with a little more than a minute of the session remaining returned him to the position.

Speedworks Motorsport’s Tom Ingram was fourth in his Toyota, ahead of the the Mercedes of Adam Morgan and Handy Motorsport’s Rob Austin – who rotated at Riches shortly after his fast lap.

Andrew Jordan was seventh in his Pirtek Racing WSR BMW, while Jason Plato improved to eighth with the final lap of the session in his Subaru.

Championship leader Gordon Shedden endured a tough session, and could only qualify 20th.

Shedden’s teammate Matt Neal had sat as high as third in the order in the first half of the session, but his Honda failed a ride height test as he returned to the pits and he subsequently had all his times deleted.

With his car raised, Neal returned to the weigh bridge after an outlap to ensure his car was legal and only made it out on track for a pair of timed runs in the final five minutes, ending up 23rd.

Update: Neal’s team appealed the ride height decision after the session, on the basis that a non-official had assisted with weighing and ride height checking process.

BTCC rules stipulate that only registered officials and scrutineers can enter the weighing area.

The appeal was therefore upheld, reinstating Neal’s fastest times from his first stint and promoting him to fourth on the grid for race one.