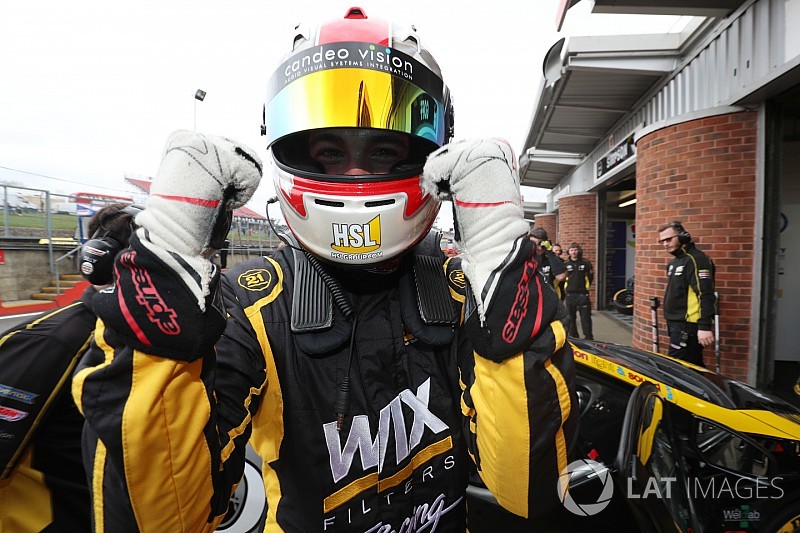 The polesitter took command from the start in the wet conditions, and stretched his lead to three seconds after five laps of the three-mile circuit.

However, Ash Sutton, driving the factory-backed Team BMR, leapt from the fifth row of the grid to second place after a stunning opening lap.

Sutton tracked down Goff and the pair were in each other’s wheeltracks on the final tour. Sutton managed to pass the leader with a brave move around the outside of the fast Coram corner, but Goff cut back coming out of the final turn to win a dash to the line by the smallest of margins.

Goff said he had been wary of Sutton’s pace over the latter stages of the event. “I had to push early to make as much of a break as possible. I thought the rear-wheel-drive cars would be coming for me, and I was disappointed when I saw what a great opening lap Ash had had.

“I was pushing on, but with five laps to go my tyres went away and Ash was closing at about 0.8s a lap – I wondered if I could hold on.”

He did, but only after the two had exchanged paint on the last lap. Goff’s win pushed him up to third in the standing while Sutton’s podium put him in up to fourth place.

“When I caught Jack, I could see where he was weak and I knew where to push,” said Sutton.  “He had a slight wobble coming out of the hairpin on the final lap and that gave me a run around Coram. There was a little bit of a touch, but that’s racing. Then it was a dash to the line and there was nothing I could do about that – that was all about engine power.”

Behind them, Dan Cammish took third place in his Team Dynamics Honda. The rookie said that he was pleased with the result as it was his first race in the front-wheel-drive car in full wet conditions. He headed Josh Cook’s Power Maxed Racing Vauxhall Astra across the line.

Tom Ingram had run fifth in his Speedworks Motorsport Toyota in the early stages before his car failed and he was forced to pull off after only three laps. That promoted Sam Tordoff’s Motorbase Performance Ford Focus to the position.

Rob Austin held on to sixth spot after a great scrap fending off the Ciceley Motorsport Mercedes of Adam Morgan and Chris Smiley’s BTC Norlin Honda. Morgan slipped off the track briefly and that handed seventh to Smiley, up from 21st on the grid.

Championship leader Colin Turkington held on to his advantage at the top of the standings despite only scoring a single point for 15th spot. He had been hampered by his 75kg of success ballast and followed title rival Matt Neal (Team Dynamics Honda) over the line.